Like the Matrix and Godfather franchises, something that started out so well for AMC Entertainment Holdings (NYSE:AMC) is sputtering near the end. Shares of the leading multiplex operator are having another rough week, tumbling after filing to sell more shares in a mad scramble for liquidity.

AMC also offered up preliminary financials for the recently concluded third quarter in the regulatory filing, and the exhibitor's performance is as bleak as you can probably imagine. Revenue for the third quarter tumbled 91%. AMC theaters didn't start reopening until midway through the period, but it's obviously struggling to woo moviegoers back in the new normal.

The stock's a hot mess, down 58% this year through Wednesday's close. The industry is crumbling before our very eyes as rivals unplug their film projectors and studios push out their releases or take them directly to consumers through premium video on demand. You don't want to be an AMC investor right now, but it doesn't mean that things will always stay that way. Let's propose a very contrarian take here, suggesting that AMC Entertainment could be one of next year's biggest winners. 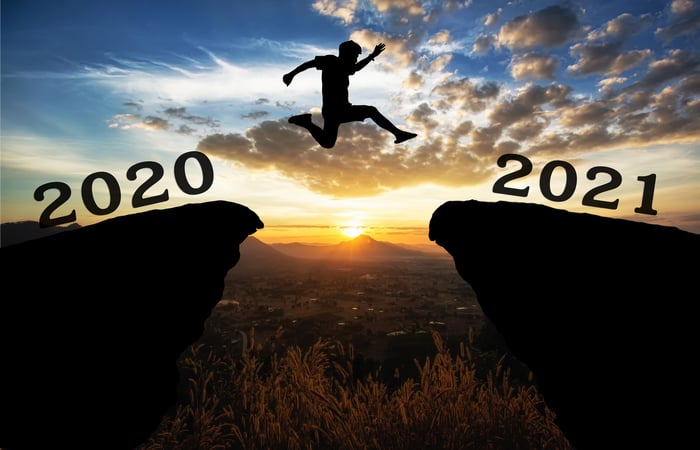 It's time for concessions

The near-term fate of the industry was seemingly sealed when Tenet was a box office dud domestically and Disney (NYSE:DIS) pulled Mulan and Soul from theatrical distribution. Rival Regal Cinemas closed down all of its U.S. theaters after the upcoming James Bond film was bumped into next year. However, even within those events, there are glimmers of hope.

Tenet has been a flop after topping just $50 million in domestic ticket sales, but it was a hit internationally with box office receipts of $334 million worldwide. In short, big releases continue to do well in overseas markets that are faring better in their fight against the coronavirus. Disney did decide to take its live-action Mulan reboot directly to Disney+ users willing to pay nearly $30 for unlimited streaming access. But it just put out a new trailer for its next animated feature, Raya and the Last Dragon, with a promise of coming to theaters in March.

A lot of studios have pushed out their 2020 blockbusters into next year, but that only builds the buzz for the murderers' row of content coming in 2021. Rival Regal decided to take its 2020 martini shaken but not stirred, but that will only give AMC a larger share of the market at a time when the pie is tiny but the future is anything but doomed.

AMC's move to raise money this week -- after warning that it could run out of money by the end of this year or early next year -- wasn't viewed favorably on Wall Street, but it does give the multiplex chain some more time. It's unlikely to close down its theaters with additional liquidity, and that may given studios that still have films on the 2020 release slate the confidence they need to see the upcoming holiday season through.

There is a lot not to like about the movie theater industry, but with some of its smaller competitors unlikely to be around a year from now and digital distribution still not a bona fide replacement for a theatrical run, you can't write AMC off right now. When the spigot of studio content begins flowing again (and it's a matter of when and not if ), AMC is going to be a bigger player. And it's going to be smarter. It has made the most of its lull by rolling out mobile concession ordering and reserved seating to most of its locations during the downtime. It has made cost cuts that will pay off in the future.

Expectations are so low for AMC right now that if the chain is just still breathing a year from now. it would be enough to see the stock price higher at that point. By sticking around, AMC could see a COVID-19 vaccine next year and ride out the recession. A lot will change in the future, but as what would probably be the last multiplex operator standing, AMC didn't make it through the past 100 years by not adapting to changing trends and consumption patterns. This year has been a box-office flop for AMC, but every so often the sequel proves to be better.

Will AMC Entertainment Be the Hottest Stock of 2021? @themotleyfool #stocks $AMC $DIS Next Article
Current