There's a hot new full-length animated feature that's trending these days. Over the Moon has all of the trademarks of a typical Walt Disney (NYSE:DIS) theatrical blockbuster. It has crisp animation, an all-star cast, and musical earworms. It's even directed by longtime Disney character animator Glen Keane. But Over the Moon isn't being put out by Disney, and it's certainly not firing up the projector at a multiplex near you.

Over the Moon is currently trending as the second-most-watched offering on Netflix (NASDAQ:NFLX). A collaboration with Netflix Animation and Pearl Studios, the buzz-building feature with an all-Asian cast is winning raves as it tugs on the heartstrings of kids and kids-at-heart. It's also doing something that Disney itself has done with Pixar's Onward and will try again later this year with Soul -- bypassing both the theatrical release window and the premium video on demand (VOD) option that seemed to be the secret sauce early in this pandemic. It's available to Netflix subscribers at no additional cost, and it's something that could eventually come around to sting Disney. 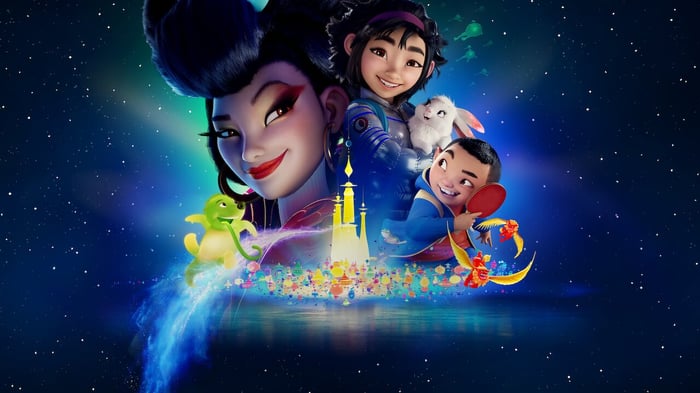 The main characters in Over the Moon. Image source: Netflix.

It seemed as if Hollywood was on to something special earlier this year when Comcast's (NASDAQ:CMCSA) DreamWorks Animation put out Trolls World Tour as a $19.99 digital rental. The musical installment of the Trolls franchise was a hit, clearing 5 million rentals through the first three weeks of springtime availability. Comcast ultimately cleared $77 million from those 5 million rentals after giving the streaming platforms their piece of the action for generating the referrals.

Movie studios that during the early stages of the pandemic were simply pushing out their planned theatrical releases started to take notes. Several premium VOD releases, typically priced between $20 and $30 a pop, have hit the market.

None of the pricey streams seem to have had the same kind of success that Comcast did in April, and that likely includes Disney's live-action reboot of Mulan last month. We'll know more about Mulan when Disney reports its fiscal fourth-quarter results next month, but its recent move with Soul is telling. Pixar's Soul was supposed to hit theaters next month, but weak box office returns since multiplex operators returned in August have led many studios to hold off on upcoming theatrical releases. Disney chose to hit the digital market with Soul on Christmas Day, making it available at no additional cost to existing Disney+ subscribers. If Mulan was a hot ticket at $30, Disney probably would've gone that route with Soul unless it wasn't confident in the release.

Why did Trolls World Tour succeed when so many other potentially larger films have failed? Timing played a starring role in Comcast's success. It was put out just a couple of weeks into the pandemic shutdown, with entertainment-hungry families looking for a taste of what they gave up in March. Paying nearly $20 for a digital rental may have seemed outrageous, but it was going to cost less than taking the entire family to the multiplex. It also helps that few people figured that the new normal would last this long. We weren't as deep into the recession, and paying for a movie that would've otherwise been playing in theaters was an indulgent novelty.

A lot has changed, and Disney can't be happy even if it's spearheading the revolution. Soul, like Onward, is going to be part of the growing Disney+ catalog. Folks pay $6.99 a month or less for the platform, and that makes the live-action Mulan at $30 a hard sell. It's the equivalent of more than four months of Disney+ premiums, and it will be free on the service in December anyway. With Netflix now streaming the Disney-esque Over the Moon to all Netflix subscribers at no additional cost, the premium model has been burned to the ground.

Will we have another premium VOD smash hit? Will we return to movie theaters? Many are applauding Disney for burning its boats -- for disrupting before it was disrupted -- but with others now playing the same game, it may not be the best strategy.