Walmart (NYSE:WMT), renowned for its use of technology to keep costs down, is retreating from a big automation program.

A report published on Monday in The Wall Street Journal said that the giant retailer is quashing a long-standing development initiative to have robots make inventory scans of its store shelves. A contract with privately held Bossa Nova Robotics, the company's partner in the effort, has been canceled. 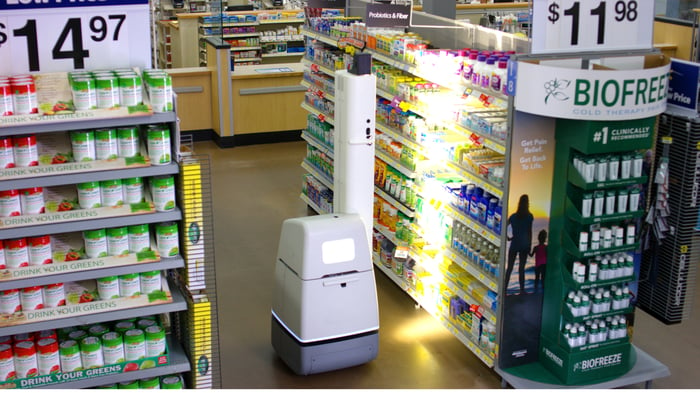 A robot prowling the aisles of a Walmart. Image source: Walmart.

The article said that Walmart has found cheaper options for the task that are just as effective. Citing "people familiar with the situation," the Journal added that the company is exploring ways of using its store employees, in combination with other technology, to get these jobs done.

According to Walmart, it had around 500 inventory robots prowling the aisles of its stores when it pulled the plug on the Nova Robotics contract. In January of this year, the retailer said it planned to deploy them in roughly 1,000 stores; all told, there are approximately 4,700 Walmart outlets in the U.S.

This robot retreat doesn't indicate a full-scale abandonment of advanced inventory-measuring technology for the company. An unnamed Walmart spokeswoman told the Journal that, "We will continue testing new technologies and investing in our own processes and apps to best understand and track our inventory and help move products to our shelves as quickly as we can."

Walmart investors seemed to shrug off this development on Monday. The company's shares rose by just under 1.2% on the day, essentially in line with the S&P 500 index.