The COVID-19 crisis has accelerated a trend that was already in place: the exodus from the cities into the suburbs. Younger adults had previously expressed an interest in walkable urban environments, but this appears to have been a temporary phenomenon. Equity Residential (NYSE:EQR) owns and manages apartments in large urban centers and the suburbs. What did one of America's largest apartment REITs have to say when it reported third-quarter earnings?

Urban environments are falling out of favor

Equity Residential reported earnings per share of $0.24 under generally accepted accounting principles (GAAP) versus $0.71 a year ago. Funds from operations, a more REIT-specific measure of earnings, came in at $0.76 per share versus $0.92 a year ago. Equity Residential was reasonably sanguine after reporting second-quarter earnings, as demand (and collections) were more stable than expected. Unfortunately, the economic environment was not the only issue; urban environments overall were falling out of favor. This caught up to the company in the third quarter as occupancy fell and the company had to resort to rent concessions to keep apartments rented. 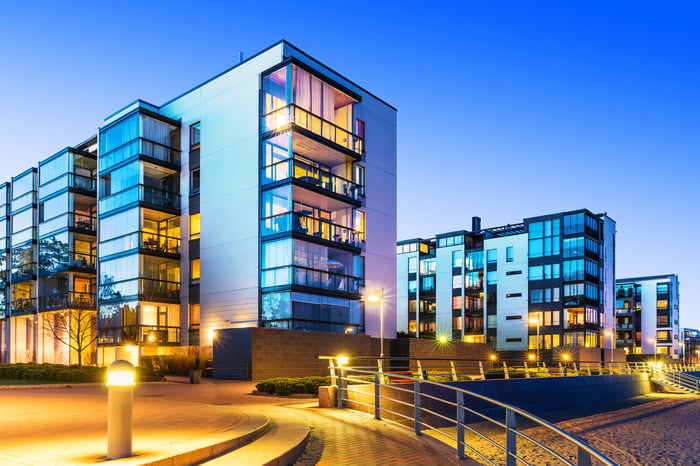 In the earnings press release, Equity Residential CEO Mark J. Parrell said that operating results were "challenging and widely varying." The suburban portfolios are holding up much better than the urban portfolios, especially those properties in the core urban areas of New York City, San Francisco, and Boston. These areas account for 23% of Equity Residential's property portfolio and have struggled with declining occupancy and rental rates. Parrell went on to say that financial results "will weaken over subsequent quarters as the full effect of the pandemic is felt on our business."

Conditions have improved modestly in October, with a small uptick in renewals and application volumes, although the company says it is premature to declare it has turned the corner. Not only that, but the effects of declining lease rates will take some time to be fully reflected in earnings, which is why the company cautioned that financial results will weaken over subsequent quarters. That said, the company believes that its target market of young affluent professionals will return to the cities once they fully reopen.

On the bright side, suburban properties are holding up well. Turnover continued to decline in the suburban markets, however it was more than offset by increased turnover and concessions in the urban areas. The company said that 70% of its concessions were in Manhattan, Brooklyn, Boston and Cambridge, and downtown San Francisco. The company also mentioned that San Francisco prices have decreased overall, which could draw some people back into the area.

The urban weakness was also felt by competitors such as Essex Property Trust, which saw a double-digit drop in revenue in its San Francisco and Alameda markets. AvalonBay Communities noted declines in rental revenue as well for Northern California and metro New York and New Jersey, although not as dramatic as Equity Residential's. This is more of an industrywide issue than a company-specific one.

The big question with Equity Residential's woes will pertain to the dividend. In the third quarter, Equity Residential paid a $0.60 dividend per share. With funds from operations at $0.76, that works out to a 79% payout ratio. The payout ratio is the percentage of earnings paid out as dividends. When the ratio increases, it indicates the dividend is more at risk. If the trickle out of the cities becomes a stampede, the dividend could be vulnerable.