Many investors seek dividend stocks, which pay you money as a shareholder. Dividend investors earn income on their investments, and it can add up to a lot. You can also reinvest dividends in more stock purchases.

But not all dividends are created equal. Starbucks (NASDAQ:SBUX), Coca-Cola (NYSE:KO), and Costco (NASDAQ:COST) all offer high dividends in addition to being great companies with future growth ahead of them.

One of the elite Dividend Aristocrats, Coca-Cola has been paying and increasing its dividend for 57 straight years. In fact, that makes it a Dividend King, in other words, a company that increased its dividend for 50+ consecutive years. The company's recent $0.41 dividend per share gives it a high 3.4% yield, which is much higher than the S&P 500 average of 2%.

Dividends are an integral part of Coke's cachet, and it continued to declare one in July despite a 28% sales decrease in the second quarter and a drop in earnings per share. The stock itself hasn't been as valuable as many others, gaining only 4% over the past three years. It's the dividend that interests most Coca-Cola investors. 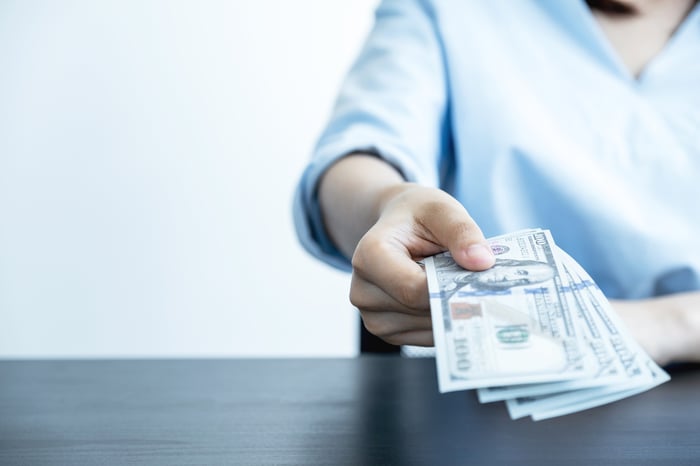 Coca-Cola is the dominant global beverage company, and it was doing well before the pandemic. Fourth-quarter 2019 sales grew 16%, bringing in $37 million in annual sales.

The beverage giant has already started to recover from the worst of the pandemic, with a much improved 9% decline in the third quarter, ended Sept. 25. With $5.5 billion in free cash flow, the company is committed to keeping its dividend. CEO James Quincey said, "We recognize the dividend is important to our investor base and continue to believe our long-term model can deliver the cash necessary to reinvest to grow the business while also supporting the dividend."

Starbucks hasn't had it easy over the past few months. With closed dining rooms and deserted urban office buildings, sales have taken a steep decline. But Starbucks has also pledged to keep its dividend and give money back to shareholders. CEO Kevin Johnson said, "The board's decision to raise our quarterly dividend demonstrates confidence in the strength of our recovery and the robustness of our long-term growth model."

The company decided to keep its dividend with a strong cash position despite heavy declines and losses in the third quarter.Starbucks performed better than expected in the fourth quarter ended Sept. 27, improving its decline to 9% overall and 3% in China. Earnings turned positive and cash increased.

The company announced a quarterly dividend in September, and increased it 10% from $0.41 to $0.45. Starbucks' dividend yield is lower than Coke's at 1.9%, but it's also moving faster. And with strong growth potential, the stock itself should bring high returns for investors.

Costco's dividend may be the most valuable of all. It's the highest amount and the lowest yield. But as you can see in this chart, Starbucks and Costco are both increasing at a higher rate than Coca-Cola. What's even more in its favor, Costco pays a "special dividend" at times when it has lots of cash. The last time it did so was in 2017, with a $7 dividend per share. 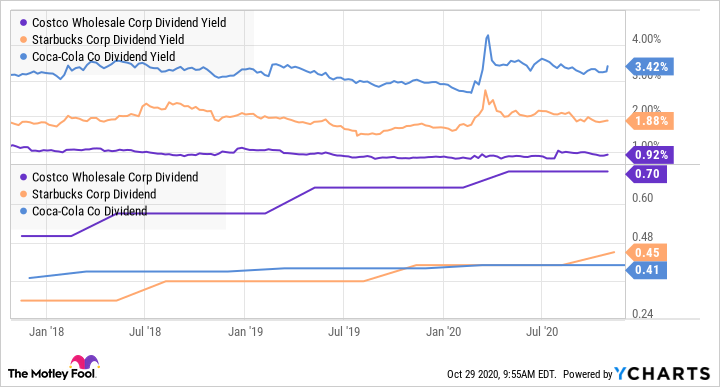 Costco's sales and earnings are both seeing high growth during the pandemic. It raised its dividend from $0.65 to $0.70 in April while other companies, such as Disney (NYSE:DIS), were suspending theirs. With over $12 billion cash at hand, Costco may be paying its shareholders another special dividend soon.