Aurora Cannabis (NASDAQ:ACB) is on a roll. Granted, it's a very short roll. Still, Aurora's shares are up more than 10% since the company announced good news last Friday. What was this good news that got investors fired up? Aurora stated that its net revenue for the three months ending Sept. 30, 2020, is expected to be at the high end of its previously announced guidance range.

The cannabis producer won't announce its fiscal 2021 first-quarter results until Nov. 9, but investors now know to expect net revenue of close to 64 million in Canadian dollars. This revenue will consist almost entirely of cannabis sales after Aurora's divestiture of its non-cannabis subsidiaries in fiscal 2020.

Is this a sign that marijuana stock could be about to make a big comeback? Not necessarily. The reality is that Aurora's latest good news doesn't outweigh its bad news. 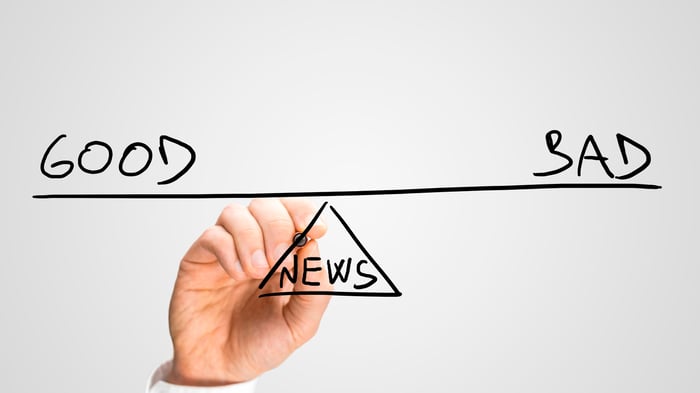 Six words that can't be overlooked

There were six words included with Aurora's good news about hitting the upper end of its revenue guidance range that provide important context: "compared to $67.5 million in Q4 2020." Even if the company does generate net revenue of CA$64 million in its fiscal 2021 Q1 results, it will still reflect a quarter-over-quarter decline of more than 5%.

Perhaps this wouldn't be too concerning if it was an anomaly for Aurora. And maybe if the company's biggest rival was facing a similar decline, there would be less of a reason for concern.

However, Aurora posted a sequential revenue decline in its last quarter, too. It wasn't just because of the company's divestitures, either. Aurora's cannabis revenue in fiscal 2020 Q4 fell 3% from the previous quarter.

Aurora's big rival, Canopy Growth, recorded quarter-over-quarter revenue growth in its latest quarter. Granted, Canadian recreational cannabis sales slipped. However, Canopy more than made up for this decline with its strong medical cannabis sales growth in both Canada and in Europe.

It's also important to note that Aurora's fiscal Q1 revenue projection came along with some not-so-great news: The company filed a shelf prospectus with all Canadian provinces except Quebec and a corresponding shelf registration statement with the U.S. Securities and Exchange Commission. This means that more dilution is on the way.

Unfortunately, we're not talking about a small amount of dilution. Aurora's shelf registration stated that it could sell up to US$500 million worth of new shares. That amount is roughly equivalent to the company's current market cap.

Granted, Aurora isn't obligated to sell all of the shares that its shelf registration indicates that it could sell. However, investors who responded enthusiastically to the company's good news about its fiscal Q1 revenue could be overlooking the fact that the recent gains for the stock would be completely wiped out even if Aurora only issues a fraction of the new shares that it could.

The need for Aurora to issue new shares underscores the company's biggest problem: its ongoing lack of profitability. Aurora continues to post huge net losses each quarter. The Canadian cannabis producer, however, remains optimistic that it will generate positive adjusted earnings before interest, taxes, depreciation, and amortization (EBITDA) in the second quarter of fiscal 2021.

Hitting near the upper end of a revenue range that reflects a continued negative trend of declines simply isn't enough good news to outweigh Aurora's bad news. So what kind of good news would move the needle in a major way for Aurora?

One positive development could come as a result of the U.S. elections. Should Democrats regain control of the Senate and Joe Biden defeat Donald Trump, the prospects for marijuana legalization at the federal level in the U.S. would increase significantly. This would be potentially huge for Aurora since it could open up the lucrative U.S. marijuana market to the company.

Another big milestone for Aurora would be for the company to not only deliver positive adjusted EBITDA in its fiscal 2021 Q2 but to also stake out a clear path to full profitability. Such a move would reassure investors that Aurora won't have to resort to dilution-causing stock offerings in the future.

Despite all of its challenges, Aurora remains the most popular pot stock on Robinhood and continues to be widely followed by many investors interested in the cannabis industry. However, until the company's good news can consistently outweigh its bad news, Aurora's popularity isn't likely to be accompanied by winning returns.