Please ensure Javascript is enabled for purposes of website accessibility
Free Article Join Over 1 Million Premium Members And Get More In-Depth Stock Guidance and Research
By Lawrence Rothman, CFA - Dec 9, 2020 at 11:15AM

Costco is a good stock to own over the long haul.

As the end of the year approaches, many people are putting together New Year's resolutions. Typically, individuals will include financial goals on this list, such as saving or investing more money. If you are just getting started, it doesn't take a huge sum of money to begin investing in the stock market.

The main thing is to get started with a sum that makes you feel comfortable. Ideally, this is not an amount that you will need in the short term. You don't have to wait until the new year before jumping in, either. After all, with so many people failing to keep their resolutions, there's no time like the present.

Starting out with $1,000, you can purchase a few shares of Costco Wholesale ( COST 0.65% ), which has a lot of attractive qualities. 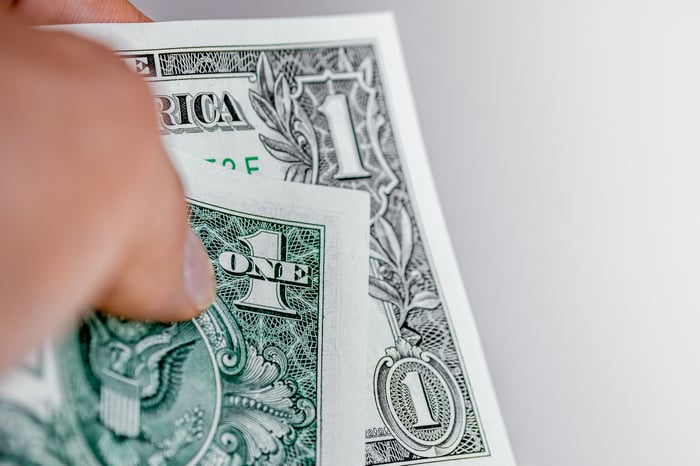 With the stock price down following Costco disclosing its fiscal first-quarter sales, you can pick up shares at a 4% lower price than at the start of December.

For the quarter, which covered the period that ended on Nov. 22, same-store sales (comps) rose an impressive 17.1% when removing the effects of gasoline price changes and foreign exchange translations. I don't think anyone should complain about that result.

This isn't just one particularly good quarter, either. Costco has continued to attract new members by offering a broad range of high-quality merchandise at low prices. The selection includes food, appliances, hardware, clothing, and cleaning products, to name just a few categories. This has been a winning formula that has led to steady paid membership growth. Membership went from 47.6 million in 2016 to 58.1 million last year.

Not only has the company been attracting new members, but comps have been increasing for years. This includes 2020's 8% increase. Better still, this has resulted in growing profitability. Over the last five years, Costco's operating profit grew by nearly 50% to $5.4 billion.

Costco has a 0.7% dividend yield, and there are certainly other companies that have higher dividends. But investors can rely on steadily increasing dividends every year. Its most recent hike was in April, when the board of directors boosted the quarterly payment from $0.65 to $0.70.

Additionally, the company has declared large special dividends every few years. The most recent was the $10 it will pay this month. Before that, Costco paid an extra $7 dividend in 2017. While you can't predict when these will occur, it is a nice bonus for owning the shares.

So, Costco provides nice sales and profitability growth that offers appreciation potential combined with growing dividends, and the possibility of a large payment down the road. On top of that, the balance sheet is healthy, with over $13 billion of cash and short-term investments, and $7.6 billion of debt at year-end.

While the stores are known for selling merchandise in large quantities, fortunately your investment in the shares can start small. Remember, you can add to it over time. It might not provide a quick path to wealth, but a slow and steady approach often wins the race.