Shares of Rite Aid (NYSE:RAD) were soaring 22.1% higher as of 10:53 a.m. EST on Thursday. The big jump came after the pharmacy company announced its fiscal 2021 third-quarter results before the market opened.

Rite Aid reported revenue of $6.1 billion, up 12% year over year. The company posted adjusted earnings of $21.6 million, or $0.40 per share. Both top- and bottom-line figures easily beat the consensus analyst estimates. 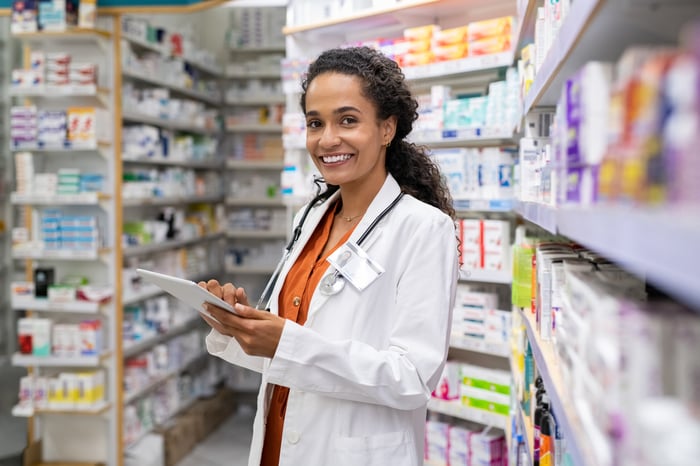 Investors shouldn't place too much emphasis on one quarterly update, whether good or bad. It's better to look at a company's quarterly performance in the context of its overall business prospects.

In this case, Rite Aid's great third quarter appears to be part of an improving overall picture. The healthcare stock is on a roll since losing half of its market cap year to date by the end of October.

Rite Aid's revenue increase was driven by solid performances for both its retail pharmacy and pharmacy services segments. The COVID-19 pandemic has hurt the company's business in some ways (for example, lower Halloween candy sales). But it has helped in other ways, such as higher front-end store sales for immunity-boosting products.

Rite Aid faces some challenges. The cold, cough, and flu season is expected to be less severe than usual, which could reduce customer traffic and sales. Its Medicaid Part D membership will decline beginning on Jan. 1, 2021. But the company could receive a boost in customer traffic once it can participate in COVID-19 vaccinations next year.