Investing in 2020 has been one bumpy ride. The S&P 500 is over 3,700 and trading at lofty multiples -- in an all-time high zone barring prior to the tech bubble in 2001. Many stocks that tanked in March are now flying high on hopes of a COVID-19 vaccine and continued government stimulus to normalize the economy. However, it's now become difficult to differentiate between stocks that are rising on fundamentals and those that are bolstered by market exuberance.

If you are looking for high-growth healthcare stocks that could go even higher, check out BioCryst Pharmaceuticals (NASDAQ:BCRX) and Cryoport (NASDAQ:CYRX). 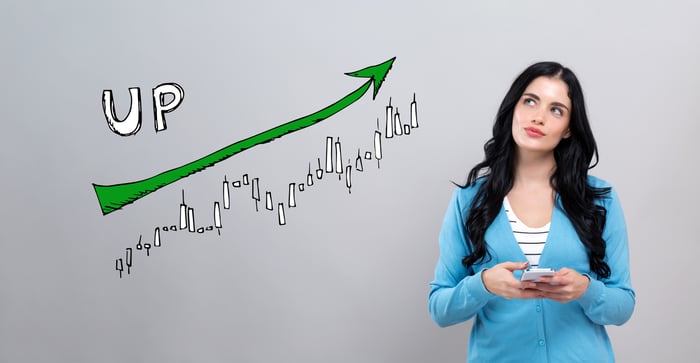 BioCryst is on the cusp of a major transformation and may soon cross the $2 billion market capitalization threshold to become a mid-cap stock. On Dec. 3, the U.S. Food and Drug Administration (FDA) approved the company's lead asset, Orladeyo (berotralstat), as the first oral, once-daily pill to prevent hereditary angioedema (HAE) attacks in adults and pediatric patients 12 years or older. HAE is a rare genetic condition causing painful attacks of swelling in the face, feet, hands, and genitals, and affects one in 67,000 individuals.

The market considers this to be a major win, since BioCryst's market capitalization has swooped up from $900 million just prior to the FDA's announcement to around $1.4 billion as of Dec. 17. Share prices are up over 138% so far in this year.

BioCryst has projected Orladeyo's global peak sales to be over $500 million. This target seems achievable, despite Orladeyo competing with subcutaneous therapies, or those administered under the skin, such as Takeda Pharmaceutical's (NYSE:TAK) Takhzyro and CSL Behring's (OTC:CSLL.Y) Haegarda. Less than three years after its commercial launch, Takhzyro has achieved an annualized sales run rate of $840 million. The commercial success of Takhzyro is indicative of HAE's market potential.

Orladeyo is now available for shipment in the U.S. and is under regulatory review in the European Union and Japan. The company expects the Japanese Ministry of Health's approval for the drug in December and European approval in early 2021.

Because Orladeyo is an oral therapy, physicians and patients prefer it to the more burdensome injectables and subcutaneously administered therapies. The drug is priced at $485,000 per patient per year, which is lower than the prices of Takhzyro and Haegarda. BioCryst expects broad payer coverage for the drug in the U.S.

However, Orladeyo has reported lower efficacy in reducing HAE attacks as compared to the market leader, Takhzyro. Hence, it remains to be seen how many HAE patients will be ready for a less effective treatment for the sake of greater convenience. Nevertheless, Orladeyo's FDA approval has surely improved BioCryst's financial standing and funding prospects for its research and development (R&D) pipeline. This bodes well for the company's next important clinical asset, the oral Factor D inhibitor BCX9930, which is being evaluated in a phase 1 trial for complement-mediated diseases including paroxysmal nocturnal hemoglobinuria.

At the end of the third quarter, BioCryst had cash worth $149 million and total debt of $81 million on its balance sheet. The company had projected the cash runway to extend until the second quarter of 2021. However, on Dec. 7, just after Orladeyo's FDA approval, the company announced $325 million worth funding from Royalty Pharma (NASDAQ:RPRX) and Athyrium Capital Management. Coupled with the anticipated contribution from Orladeyo's sales starting in 2021, this can enable BioCryst to sustain operations without additional capital raises through 2022. Hence, this high-growth company can prove to be an attractive investment for healthcare investors in the coming years.

Cryoport is a global cold chain logistics solutions provider for biopharma and reproductive medicine companies as well as animal health organizations. The company's share price is up 215% so far this year, yet there is scope for even more growth.

Cryoport has entered into long-term agreements for supporting the global launch of five major gene therapies, such as Gilead Sciences' (NASDAQ:GILD) Yescarta and Tecartus, Bristol-Myers Squibb's (NYSE:BMY) Lisocabtagene Maraleucel (liso-cel), Novartis' (NYSE:NVS) Kymriah, and bluebird bio's (NASDAQ:BLUE) Zynteglo. The increasing pace of regulatory approvals and rapid adoption of cell and gene therapies has emerged as a major secular tailwind for Cryoport, since these innovative treatments are highly temperature sensitive. As these therapies become increasingly mainstream, Cryoport will emerge as a major beneficiary of this trend.

The company has already entered agreements to handle logistics of multiple investigational assets currently under regulatory review either in the U.S. or Europe. Post-approval, these assets will open up new revenue streams for Cryoport. The company also provides logistics support for clinical trials.

The COVID-19 pandemic definitely caused some disruption to Cryoport's business. However, the company has managed to leave all these problems behind and come back even stronger. Approximately 56 clinical trials had been suspended due to the pandemic, but all of them have since been restarted. In fact, at end of third quarter, the company was supporting 517 trials, compared to 425 clinical trials at the end of September 2019.

The pandemic can even prove to be a net positive for Cryoport. The company has been supporting logistics for 26 clinical trials involving several COVID-19 vaccine and therapeutic candidates. Moderna (NASDAQ:MRNA)also plans to use services of  Cryoport as one of the key external vendors for handling cold-chain logistics, storage, and shipping management for its COVID-19 vaccine candidate, mRNA-1273.

Cryoport's third-quarter revenue was up 17% year over year  to $11 million, which is definitely admirable in the current economic environment. The company is not yet profitable, but it has a healthy balance sheet with cash, cash equivalents, and short-term investments of $203 million, and $120 million of debt at the end of the third quarter. Assuming the company's average quarterly operating costs and expenses of $17 million are representative of its cash burn rate, it has a cash runway at least until mid-2023.

Cryoport is currently trading at 51.8 times price-to-sales. The valuation, although quite expensive, seems justified considering Cryoport is a relatively safe stock. Unlike a pharma or biotech company that's exposed to significant R&D failure risk, Cryoport is not subject to such risks. At the same time, expanding research pipelines, or increasing regulatory approvals for major pharmaceutical companies brings added business to Cryoport. In short, the company has the advantages linked to the healthcare sector, minus the challenges inherent in that sector. Healthcare investors should consider having this stock on their radar.