Intuitive Surgical (NASDAQ:ISRG) and Medtronic (NYSE:MDT) are two of the bigger medical equipment companies delving into the growing field of robotic-assisted surgeries (RAS). New RAS systems are used with minimally invasive surgery techniques that are said to decrease the chance of infection, pain and blood loss, and foster shorter recovery times for patients.

It was a down year for many medical equipment companies because the coronavirus pandemic led to the deferral of many elective surgeries. But both companies have endured the pandemic pretty well. Intuitive's shares are up more than 38% year to date while Medtronic is up only slightly at 1.45% in 2020.

Intuitive Surgical's da Vinci system was a pioneering tool in robotic surgeries. It was initially approved for laparoscopic surgery by the U.S. Food and Drug Administration back in 2000. Medtronic, however, first through a partnership with Mazor Robotics and then through purchasing outright Mazor in 2018, is showing that it intends to become a major player in the market. There's a huge upside to the robotic surgery space; the market is expected to sport a compound annual growth rate of 21.55% through 2023, according to one report from Market Insights. Let's see which is best poised to capitalize on that growth. 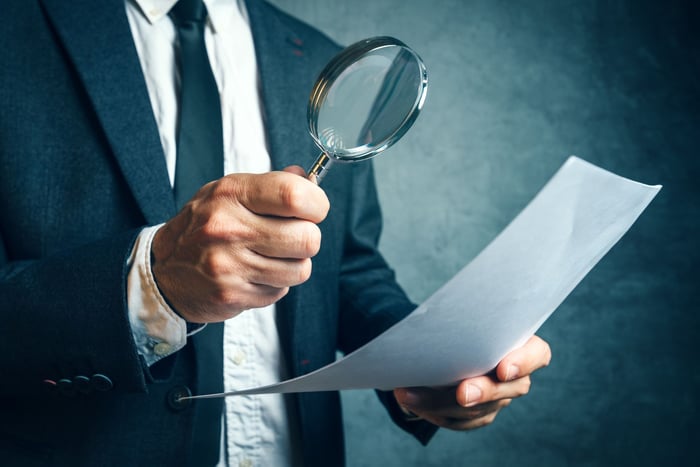 Through nine months, Intuitive reported $1.7 billion in revenue, down 1% year over year. Its net income, however, was listed as $703.2 million, down 30% compared to the same nine months in 2019.

Intuitive was founded 25 years ago, and it's still growing sales at amazing rates. Over the past five years, it has increased revenue 87.8%, compared to Medtronic's modest revenue growth of 0.28% in that same stretch.

Intuitive's gross operating profit margin, while it has declined, is still a healthy 66%. It's a lean company with roughly 8,000 employees.

Much of the company's earnings come from its maintenance of the more than 5,800 da Vinci surgical systems it has installed, in addition to new sales and leasing of da Vinci systems.In the third quarter, the company made $631 million in its instruments and accessories revenue, nearly three times what it made from the sale of new da Vinci systems. 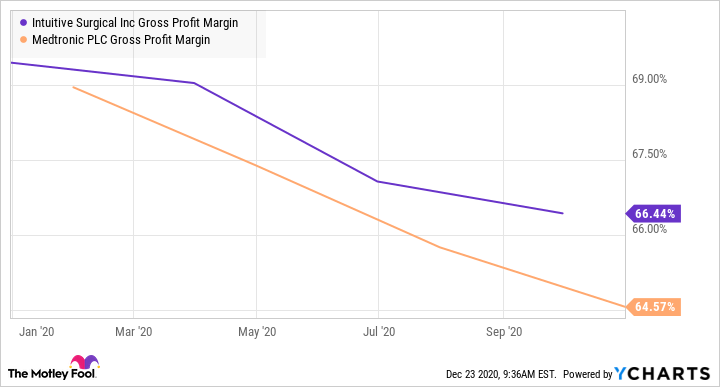 Medtronic, with a market cap of $157 billion and more than 90,000 employees, is a more diversified business than Intuitive. Medtronic has been in business since 1949 and is a Dividend Aristocrat, with a history of raising its dividend for 43 consecutive years.

It has four segments: cardiac and vascular, diabetes, minimally invasive therapies, and restorative therapies. The company has a variety of products, including its own robotic surgery systems: The Stealth Autoguide cranial robotic guidance platform, the Mazor X Stealth Edition and StealthStation S8 robotic guidance systems, which are primarily used for spinal surgeries. It also has another surgical robot, the Linq 2.0, in development.

Medtronic's fundamentals have taken less of a hit during the pandemic than Intuitive's. The company's reported 2021 second-quarter revenue of $7.6 billion, which was down 0.8% year over year. The company's top division, its minimally invasive therapies group, which includes many of the company's robotic-related sales, listed an improvement of 2.3% year over year; the company's net income of $1.9 billion rose by 11.3% over the same period in 2019. 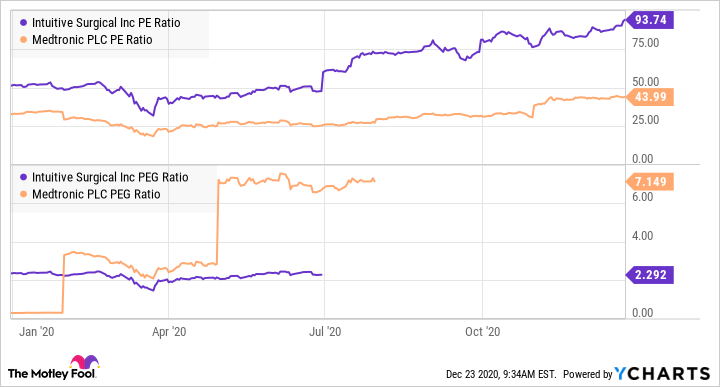 The difference a year makes

A year ago, it was much easier to call Intuitive a better stock. The company's revenue growth and dominance in a niche market gave it a lot of momentum. However, this year, Medtronic has shown how being a larger and more diversified company makes it less vulnerable during a downturn.

In many ways, Medtronic's share price doesn't reflect its ability to bounce back. It's price-to-earnings ratio (trailing 12 months), at 43, is a little under half of Intuitive's 93. Medtronic also has something Intuitive doesn't have: a dividend with a yield of 2.03%.

However, when you factor in Intuitive's growth rate, it still appears to be the better deal, despite its stock price's rise this year. It has a price-to-earnings-growth (PEG) ratio of 2.2 compared to Medtronic's 7.1.

Intuitive continues to grow revenue at a faster rate than the industry average and, when elective surgeries pick back up, the company's business will as well. Medtronic may not be the better buy today, but it can't hurt to add it to a watchlist considering the business's size and ability to weather storms.