The company's stock is up more than fivefold for 2020 and was flirting with new all-time highs even as the year drew to a close. 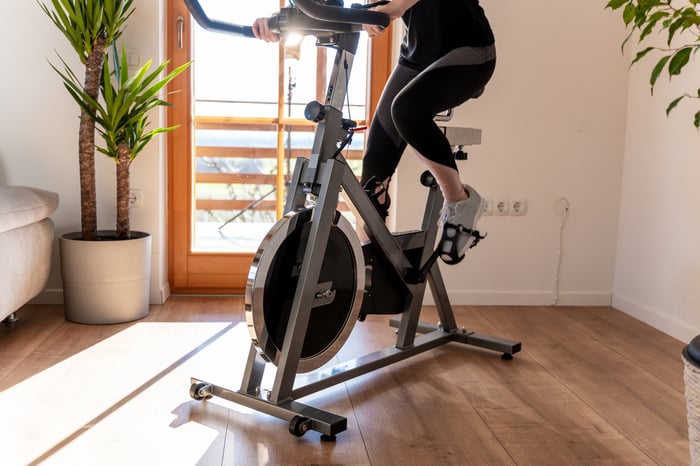 The home fitness equipment provider's business boomed in the wake of the pandemic as more people started exercising from home. Peloton, which has a database with 3.6 million members, saw its connected fitness subscriptions more than double from 563,000 last year to 1.3 million in the first quarter of fiscal 2021. Total workouts quadrupled from 19.2 million to 77.8 million over the same period, underscoring the rapid growth for the company as more and more people took to its fitness programs.

Consequently, revenue for the quarter more than tripled year over year from $228 million to $758 million, while the company booked net income of $69.3 million, reversing a net loss of $49.8 million in the same period last year. Because of its rapid growth, Peloton has announced that it is adding around 100,000 square feet of space to its Peloton Plano Campus in Texas, while also hiring another 1,600 people.

In late December, the company announced it is purchasing Precor, a global provider of commercial fitness equipment, for $420 million. This transaction will help to boost Peloton's production capacity (Precor has a significant U.S. manufacturing presence) to handle the flood of orders the company has received but finds tough to fulfill. It will also allow the company to expand its product and customer base and penetrate the lucrative commercial market. In one fell swoop, the acquisition of Precor will bolster Peloton's competitive standing and increase its total addressable market for fitness products.

Peloton is also testing out some of its music, after announcing that it will debut exclusive new Elvis Presley remixes on its platform for a month. By adding music to its proprietary video content, the company should be able to continue hooking new customers to stay loyal to it.