Shares of the retailer gained as it reinstated its dividend and seemed to have a strong holiday season.

Shares of American Eagle Outfitters ( AEO 0.57% ) rose again last month as the teen apparel retailer gained on momentum following a strong third-quarter earnings report and announced that it was reinstating its dividend at the beginning of December. The stock also rose at the end of the month on speculation that the company had a good holiday season.

According to data from S&P Global Market Intelligence, the stock finished the month up 12%.

As you can see from the chart below, the stock's gains came mostly at the beginning of the month. 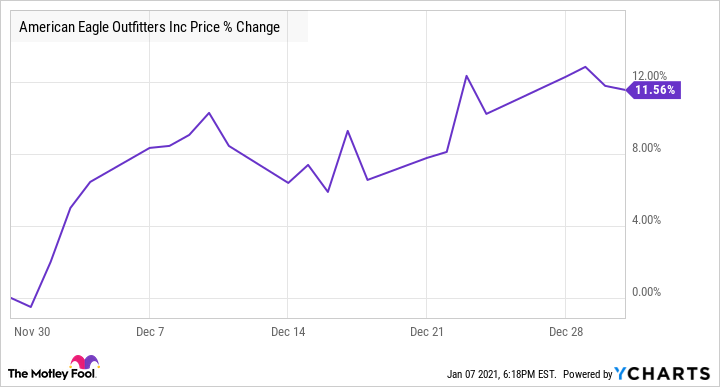 American Eagle came into December on a winning streak after gaining 31% in November on a better-than-expected earnings report that included strong growth in digital sales and at its Aerie sub-brand. On Dec. 3, the stock rose 3% as part of a multiday rally, as the company said it would reinstate its $0.1375 quarterly dividend after suspending it early on in the pandemic, like most retailers did. CEO Jay Schottenstein said, "In light of a strong third quarter and the significant progress we've made to strengthen our financial liquidity after the onset of COVID-19, we are pleased to pay our deferred first quarter dividend before the close of 2020." 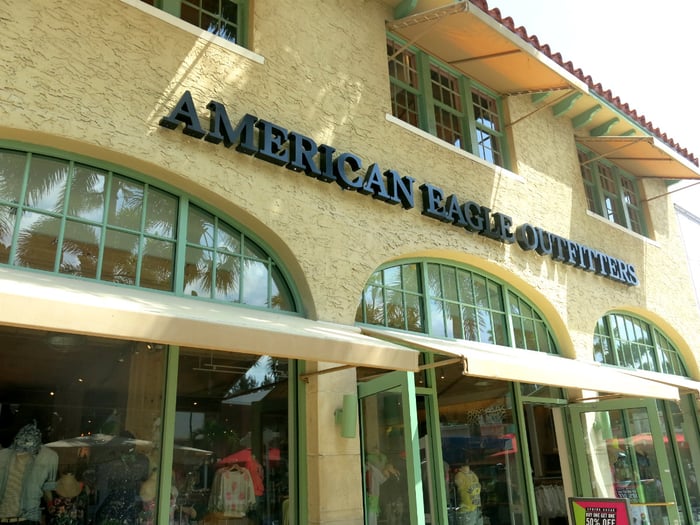 The dividend currently offers a yield of 2.5%.

Toward the end of December and into the first week of January, the stock climbed again, seemingly on projections that the company had a strong holiday season. Financial services company B. Riley said channel checks found that American Eagle was one of a group of retailers that had lean inventory and lower promotions from a year ago, showing stores sold through their merchandise during the key shopping season.

American Eagle stock is now up 54% over the last year, getting a boost in recent days after Democrats won the Senate, which convinced investors that an increased stimulus package is on the way. That should be a boon for recovery stocks like retailers. American Eagle has been one of the best-performing brick-and-mortar retailers during the crisis, largely because of the strength of Aerie, its intimates brand that has quickly grabbed market share from Victoria's Secret.

While in-store sales will still be challenged for the duration of the pandemic, the company will be in a much stronger position than its peers when the economy reopens.

3 Top Value Stocks That Could Help You Retire Early