The stock market rose Friday morning despite a jobs report that fell far short of expectations. Nonfarm payrolls declined by 140,000 in December, according to the U.S. Labor Department, the first decline since April. This news comes soon after Congress passed a $900 billion pandemic relief bill.

With the economy stalling and Democrats set to control the White House and both houses of Congress later this month, additional economic stimulus is likely. The market may be rising on the expectation that more government support is coming, or on optimism over the rollout of COVID-19 vaccines. The Dow Jones Industrial Average (DJINDICES:^DJI) was up 0.14% at 9:45 a.m. EST.

Cisco Systems (NASDAQ:CSCO) stock was up on Friday despite the acquisition of Acacia Communications (NASDAQ:ACIA) being terminated by Acacia due to issues getting regulatory approval in China. Meanwhile, shares of Boeing (NYSE:BA) were down slightly after the company was charged with fraud conspiracy and agreed to pay massive fines related to the 737 MAX. 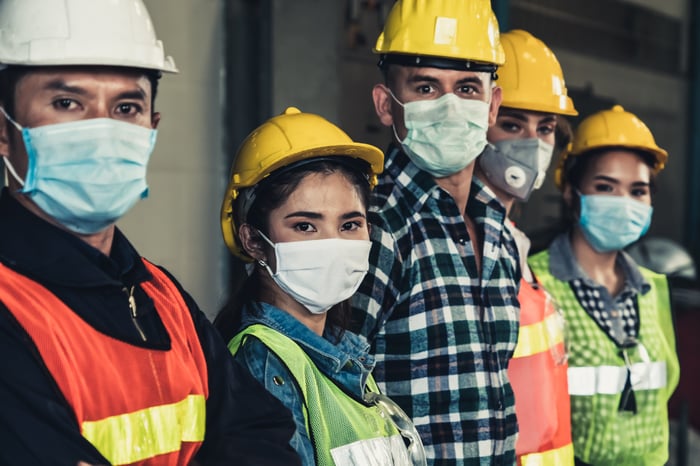 Cisco's acquisition of Acacia is off

Networking hardware giant Cisco announced the $2.6 billion acquisition of optical interconnect provider Acacia Communications in July 2019. "By integrating Acacia technology into Cisco's networking portfolio, we believe we can accelerate the trend toward coherent technology and pluggable solutions while accommodating a larger footprint of customers worldwide," said Acacia CEO Raj Shanmugaraj when the deal was announced.

Shares of Acacia soared on the news, perhaps on expectations that the company will garner a higher value in the very pricey stock market that has emerged since the deal was first announced. Acacia stock was up about 9.6% Friday morning, while Cisco stock was up 0.4%.

Boeing was charged with fraud conspiracy on Thursday over its actions related to the 737 MAX. The company entered into a deferred prosecution agreement with the US. Department of Justice and agreed to pay fines totaling more than $2.5 billion.

The fines include a criminal monetary penalty of $243.6 million, compensation of $1.77 billion to Boeing's 737 MAX customers, and the establishment of a $500 million fund for beneficiaries of crash victims. Two fatal crashes caused by a faulty flight control system killed 346 people before the 737 MAX was grounded worldwide for nearly two years.

"The misleading statements, half-truths, and omissions communicated by Boeing employees to the FAA impeded the government's ability to ensure the safety of the flying public," said U.S. Attorney Erin Nealy Cox for the Northern District of Texas. "This case sends a clear message: The Department of Justice will hold manufacturers like Boeing accountable for defrauding regulators – especially in industries where the stakes are this high."

Shares of Boeing were down about 0.7% soon after the market opened on Friday. The stock has lost roughly 37% of its value over the past year.