There's no such thing as a completely recession-proof stock, but some weather economic turndowns better than others.

Think of reasonably valued companies with solid bottom lines that offer products or services that people can't really cut back on, even during a recession. These are the qualities that helped Bristol Myers Squibb (NYSE:BMY), Johnson & Johnson (NYSE:JNJ), and Medical Properties Trust (NYSE:MPW) all to ride out both the 2008 recession and this past year's volatility with little difficulty.

Each recession is different, of course, but these three businesses are exactly the type of life preservers investors turn to when they need a little protection. 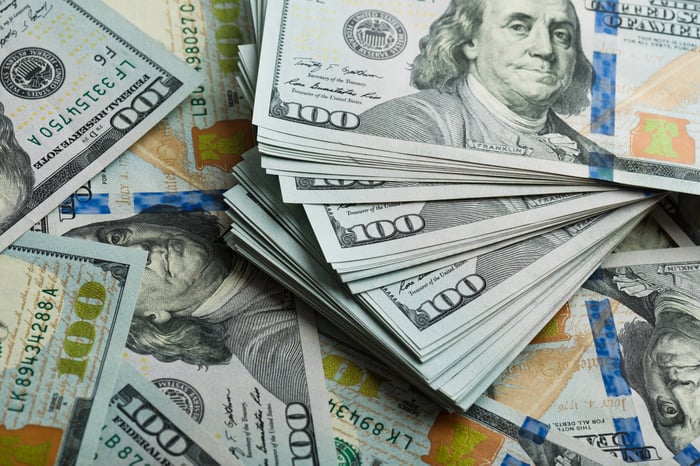 Bristol Myers Squibb's revenue numbers went up during the past two recessions. In the period from 2008 to 2011 during the recession spawned by the housing crisis, the company increased its revenue each year. In 2020, in the midst of the global pandemic, it has had three record quarters.

Despite that display of strength, the company's stock probably remains underpriced, which should help it if another downturn comes along. Bristol Myers Squibb's forward price-to-earnings (P/E) ratio of 8.4 is low for a pharmaceutical company. Through the first three quarters of the year, the company said it realized $31.4 billion in revenue, a rise of 74.4% year over year. Bristol Myers Squibb has a huge roster of products, with top-earning drugs so far this year including Revlimid (which treats multiple myeloma and brought in $8.8 billion), Eliquis (which treats blood clots and brought in $6.9 billion), and Opdivo (which treats non-small cell lung cancer and brought in $5.2 billion).

There's also the company's dividend, which can really benefit long-term investors. Bristol Myers Squibb most recently raised its quarterly dividend for the 12th consecutive year; it's up 8.9% to $0.49 per share, giving it a current yield of 3.14%, well above the S&P 500's 2% average.

Johnson & Johnson is up more than 10% over the past year. That's typical for the company, which makes up in steadiness what it lacks in growth.

This Dividend Aristocrat has increased its dividend for 58 consecutive years and boasts 37 consecutive years of adjusted operational earnings growth, including 2% through the first nine months of this year. Johnson & Johnson's dividend yield is currently 2.52%.

Johnson & Johnson is a huge company, and its three segments give it built-in diversity of revenue. Because the COVID-19 pandemic led to fewer office visits and elective procedures, the company's medical devices segment posted a year-over-year revenue decline of 15.3% through nine months, but the pharmaceutical segment is up 5.2% and consumer health is up 1% over that same period. 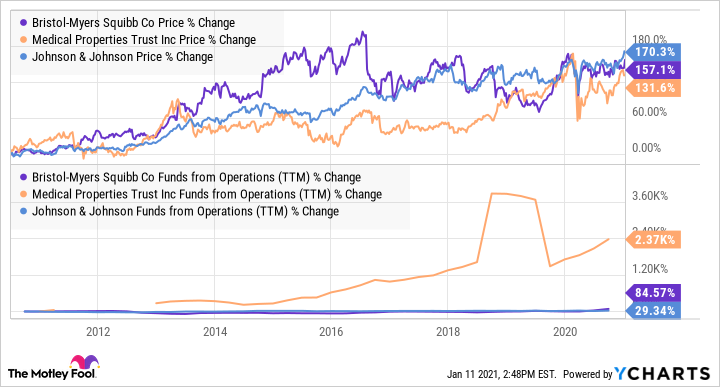 3. MPW Medical Properties Trust is much healthier than it looks

The medical profession was particularly hard-hit during the COVID-19 pandemic, but hospitals continued to pay rent. That's why Medical Properties Trust's shares are up slightly over the past year. The company, a real estate investment trust (REIT), owns and leases hospitals, and is the second-largest owner of hospital space in the United States. It owns 390 properties in 34 U.S. states and nine countries.

Anyone who bought stock in the company at the beginning of 2008 and sold it at the beginning of 2011 would have seen a return of 43.9%, counting dividends. And as for the 2020 recession, the company said revenue through the first nine months was $538.2 million, up 53% year over year. More importantly, funds from operations (FFO) were a reported $565 million, up 51% over the same period in 2019, and adjusted FFO was $476 million, up 49.7%. While many stocks plummeted between Feb. 12 and March 12 of last year, Medical Properties Trust fell just 18%.

Investors have done well with Medical Properties Trust. Since the company's initial public offering in 2005, its stock has returned 454% (including dividends). That's compared with the S&P 500's 286% in the same period. The dividend yields 5.14% and has been increased every year for the past eight years.

In its third-quarter report, the company said it has collected 100% of its fourth-quarter rent and interest payments from tenants. Most of the company's leases are long-term absolute net leases, in which the tenants bear all costs -- maintenance, repairs, utilities, and taxes, as well as regular inflation-based rent-price increases.

It's all about stability and consistency

None of these three stocks are high flyers, but they are consistent earners. Bristol Myers Squibb and Johnson & Johnson both have huge stables of drugs that offer diversification and long-term revenue growth. Medical Properties Trust has elite tenants that will continue to pay rent no matter the economic weather. And all three offer above-average dividends to reward patient and long-term investors.

Of the three companies, Johnson & Johnson is clearly the safest, but it's also the most overpriced. I see Bristol Myers Squibb as the best life jacket, for this year at least. Its current share price is a better bargain than Johnson & Johnson's, and the company has a longer and more optimistic track record than Medical Properties Trust.