Even stocks that haven't made it into the Dividend Aristocrats index yet can be great investments for income and growth, though. One stock that will likely get there within a few years is real estate investment trust W.P. Carey (NYSE:WPC). Here's why you might want to put it on your radar. 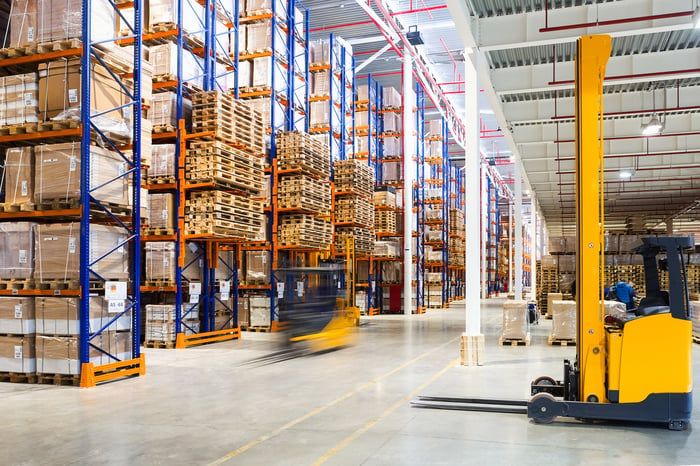 What does W.P. Carey do?

W.P. Carey is a real estate investment trust, or REIT, that owns net-leased commercial properties. If you aren't familiar, a net lease is a form of commercial lease structure where the tenants pay property taxes, insurance, and maintenance expenses. Typically, net lease properties are occupied by a single tenant that signs a long-term (15-year or more) lease with gradual rent increases built in. In a nutshell, net leases are designed to produce reliable and growing income for a long time.

The company was founded in 1973 and has grown into one of the largest net-lease REITs in the market. As of the third quarter of 2020, W.P. Carey owns more than 1,200 properties with about 142 million square feet of space. Unlike most other REITs, though, the company doesn't limit itself to just one property type. Rather, W.P. Carey is one of the most diversified REITs in the market, with industrial, office, retail, and self-storage properties in its portfolio. Virtually all have rent increases built in. Better yet, most of these are tied to inflation, which provides another layer of protection. Top tenants include Amerco's (NASDAQ:UHAL) U-Haul, Extra Space Storage (NYSE:EXR), Marriott (NASDAQ:MAR), and Advance Auto Parts (NYSE:AAP), just to name a few, with no single tenant accounting for more than 3.3% of revenue. The company's properties are geographically diverse as well, with locations throughout the United States and Europe.

Further adding to the stability is W.P. Carey's rock-solid balance sheet. The company has an investment-grade credit rating and a below-average debt load that allow it to fund acquisitions and development at attractive costs of capital.

Finally, investors don't have to worry about the effects of the COVID-19 pandemic too much. W.P. Carey collected 98% of its billed third quarter rent, a statistic most other REITs (especially those with retail exposure) haven't come close to. Impressively, W.P. Carey collected 100% of its retail rent. The primary source of weakness was the roughly 2% of the portfolio made up of fitness, theater, and restaurant businesses.

The only reason W.P. Carey isn't already a Dividend Aristocrat is that it hasn't been a publicly traded company for long enough. Although the company has been around since the 1970s, W.P. Carey completed its IPO in 1998. It has increased its dividend every year since -- an impressive 22-year track record.

During its publicly traded history, W.P. Carey hasn't just been a great income stock. It has delivered a 1,320% total return for investors in just over 22 years (about 12.8% annualized), as compared with just over 500% for the S&P 500 during the same period.

A great choice for long-term investors

W.P. Carey is built to generate predictable and growing income for investors, year-after-year, no matter what the economy is doing. It isn't going to make you rich quickly -- that isn't the point of REITs, especially this one. If your investment priority is to gradually grow your money and produce a reliable income stream from your portfolio, though, this is definitely a stock to put on your radar.