When Sea Limited (NYSE:SE) went public in late 2017, I wasn't impressed by the Singapore-based e-commerce and gaming company. Its revenue was soaring, but its losses were widening as it faced tough competition in Southeast Asia from Alibaba's (NYSE:BABA) Lazada.

I turned bullish last August when I realized Sea's profits from its gaming business, Garena, were offsetting the losses from its e-commerce platform, Shopee. But I was still reluctant to buy the stock since it seemed a bit too expensive relative to other e-commerce and gaming stocks.

Yet Sea's stock has still surged more than 450% over the past 12 months, as the pandemic lit a fire under its e-commerce and gaming businesses. I generally don't like to chase high-flying stocks, but I finally started a small position in Sea, for four simple reasons. 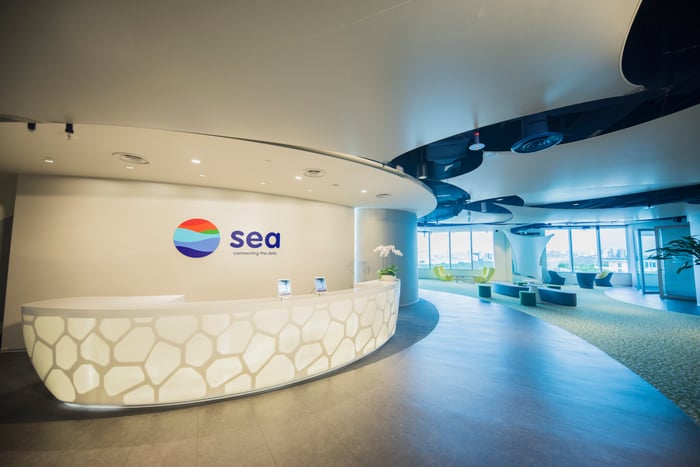 1. It's not a Chinese tech stock

Last year, Chinese tech stocks accounted for about a fifth of my portfolio. However, it's getting much tougher to own those stocks amid escalating trade, tech, and political tensions between the U.S. and China.

In December, the U.S. passed a law that would delist Chinese stocks from American exchanges if they didn't comply with U.S. auditing rules for three consecutive years. Earlier this month, the Trump administration forced the New York Stock Exchange to delist China's three largest telecom companies over their alleged ties to the Chinese military -- and more delistings could follow. Meanwhile, Chinese regulators launched new antitrust laws to rein in tech giants like Alibaba and Tencent.

In short, Chinese tech stocks are stuck between a rock and a hard place. So I recently sold most of my Chinese stocks and put some of that cash into Sea -- which should be well-insulated from those regulatory threats.

Sea attributed Garena's growth to the popularity of Free Fire, a self-developed battle royale game that was launched in 2017 and remains the highest-grossing mobile game in Southeast Asia and Latin America. It's currently testing out an enhanced successor, Free Fire MAX, in several markets.

Shopee, which surpassed Lazada in total downloads across Southeast Asia and Taiwan last year, benefited from a surge in online shopping throughout the pandemic as its gross orders more than doubled year over year throughout all three quarters of 2020.

Shopee and SeaMoney remain unprofitable, but the strength of the company's digital entertainment segment is easily offsetting those losses:

The profitability of Sea's gaming business can be compared to Alibaba's high-margin core commerce business, which offsets the losses from its other unprofitable businesses, or Amazon's (NASDAQ:AMZN) cloud business, which subsidies the growth of its lower-margin marketplaces.

Garena is admittedly wobblier and less-diversified than Alibaba's marketplaces or Amazon Web Services (AWS), but it could continue to offset Sea's losses at Shopee and SeaMoney for the foreseeable future.

Analysts expect Sea's revenue to rise 78% this year and 46% next year. Its adjusted EBITDA should remain positive, and analysts expect its GAAP net loss to narrow next year.

Based on these facts, I'm willing to take a chance on this budding tech company as a long-term play on Southeast Asia's growing e-commerce, fintech, and gaming industries. It might be a bumpy ride, but I believe it could generate more multibagger gains over the next few years.