The decision came after last Wednesday's rioting in and around the Capitol building, and after President Trump continued to "incite violence" on Twitter, as the company explained in a blog post on Friday.

Not surprisingly, there was a swift backlash from several right-wing figures, who assailed the move as a crackdown on free speech. Many of those protesting Twitter's action say they have joined competing sites like Gab and Parler, the latter of which faced problems of its own after several other tech companies refused to do business with it over its role in the Capitol building attack.

Twitter also purged thousands of accounts it says are linked to the controversial group QAnon, leading to complaints from several conservative politicians and pundits.

Despite the controversy and the sell-off, the move shouldn't affect this tech company's underlying business over the long term. In fact, it could even be a positive force for the company. 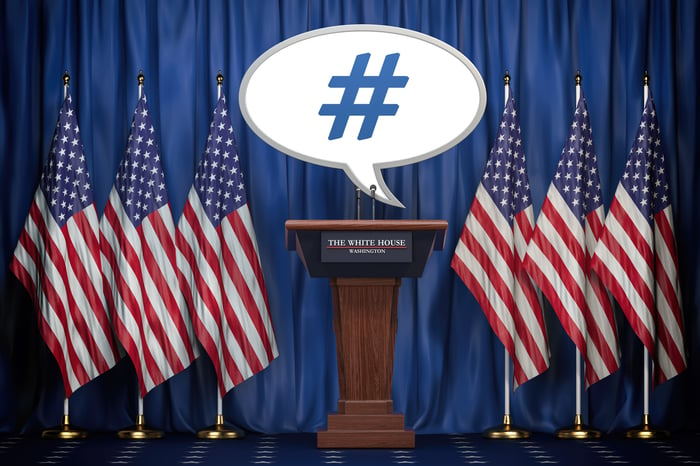 It's easy to see why investors would react poorly to the Trump ban. First, the president is a magnet for attention on the site. With 88 million followers, Trump was one of the most-followed users on the service. Trump also brought a level of attention to Twitter that no previous political leader had, using it as his own personal megaphone to communicate with the public. It made Twitter and Trump's account, @realDonaldTrump, a must-follow source for much of the news media, Trump's own base, and anyone else politically inclined. Banning him has led to a backlash from his supporters and other corners of the conservative establishment, who have attacked the site and promised to go elsewhere.

But it's important to remember several facts here. First, Trump's influence and relevance is likely waning, as he will soon no longer be president. That means his tweets will be far less newsworthy after Jan. 20's inauguration of President-elect Joe Biden. And though he may continue to agitate about presidential issues, the media will likely not pay as much attention to his comments as he's become accustomed to. While the risk of backlash is real and Twitter may lose some users permanently, ultimately the site really has no true competitor. Social media sites like Gab and Parler have emerged as right-wing stand-ins for Twitter, but there's no other site designed to disseminate opinions, information, and other comments with the breadth and depth offered by Twitter.

Though its function as a news source is one of its strengths, Twitter users rely on the social media platform for much more than just getting news. Many follow specific "channels" within Twitter. For instance, investors on #FinTwit use Twitter to dialogue with other investors to discuss stocks and trade investing tips. There are myriad other channels where Twitter users discuss specific topics of interest, whether they're professional, cultural, or entertainment-related.

That ability to function as a unique platform for shared interests is Twitter's biggest strength, and it means that the vast majority of its users will stick around even without Trump.

Why it could be a long-term positive

Twitter has long struggled with "safety" -- basically concerns about incendiary comments made by select users. Over the years the company has purged the site of bad actors who engage in hate speech and harassment (Milo Yiannopoulos is one example). It has also worked to tighten control around the dissemination of false information and election interference (it banned political ads ahead of the 2020 election, for example). In early 2019, CEO Jack Dorsey said that initiatives related to the health and safety of the platform would be a "long-term growth vector" for the company. That shift seems to have helped drive the stock's gains in recent years.

Trump's presence on Twitter had long been seen as problematic and many critics had repeatedly called for his removal or censure. In the run-up to the election, Twitter added disclaimers beneath many of the president's tweets to indicate that the veracity of the comments made was in doubt. Had Trump been a private citizen, his behavior likely would have already gotten him ejected from the platform. However, Twitter's rules are more lenient on public figures since their posts are considered newsworthy.

At this point, Trump has become toxic beyond Twitter. Several companies have severed ties with him and pledged to stop donating to GOP candidates involved in trying to overturn the election. Advertisers have already boycotted Facebook for running ads alongside hate speech, and those advertisers that Twitter depends on may be similarly turned off by the president's presence on Twitter, as his brand is fast becoming anathema in the business world. For the social media site, there's a reputational risk to allowing Trump to remain on the platform after last Wednesday's events, which may exceed the backlash that's followed the ban.

Notably, it was Twitter's own employees who drove leadership to suspend Trump, as more than 300 signed a petition to ban the president. It's not surprising that they wouldn't want to work for a company seen as abetting the potential overthrow of the government. For the company, banning Trump engenders good faith with its own workforce, which is a key stakeholder group and a valuable asset in highly competitive Silicon Valley. Banning Trump also is a signal of good faith to the president's many critics and those who would like to see the platform become a more civil place.

Ultimately, Trump's importance to Twitter was exaggerated by the sell-off Monday. The news is likely to fade over the coming weeks, and Trump will be even quieter without his favorite microphone, unable to whip up outrage at the social media company.

What will determine Twitter's growth over the long term isn't the presence of its most talked-about user, but its ability to connect advertisers with users. With a major source of controversy now out of the way, that may become easier.