The pet supply store is coming back to the public markets after a long absence. It's boasts a growing digital presence and expanding omni-channel capability.

Even before its breakout on Wall Street Thursday, investors were probably already familiar with Petco Health & Wellness Company (WOOF -1.50%). Not only is it the second-largest pet supplies retailer in the country, but this also isn't its first time as a publicly traded company. Petco made its first appearance in 1994, but was taken private in 2000. The company made its second debut in 2002, and was once again taken private in 2006. "Third time lucky," as the saying goes.

Petco originally planned to offer the stock in a range of $14 to $17 per share. As a result of strong investor demand, however, shares were ultimately priced at $18. The stock kicked off trading Thursday at 12:13 p.m. EST on the Nasdaq Stock Exchange. The stock opened at $26, an impressive 44% above the offering price. Petco closed out the trading day at $29.40 per share, gaining more than 63% on its debut. 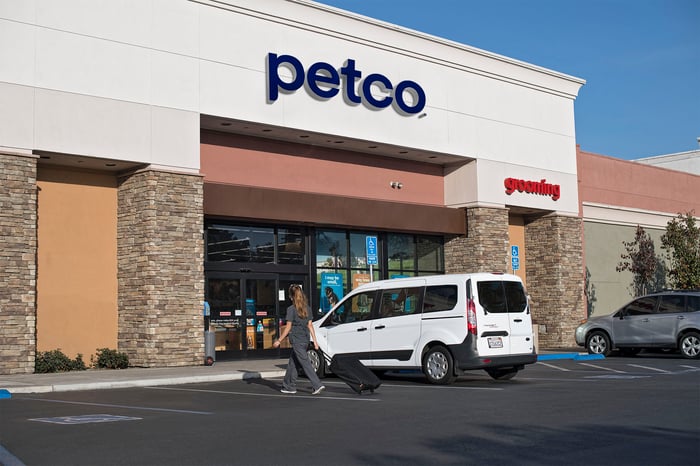 The company has evolved beyond its stodgy retailer roots, offering a comprehensive, multi-channel pet care ecosystem that includes training and grooming, veterinarian services, pet insurance, and more. Petco is also no longer beholden solely to its brick and mortar stores, expanding its digital footprint into the realm of mobile and e-commerce transactions.

For the fiscal year ended Feb. 1, 2020, Petco reported net sales of $4.43 billion, an increase of 1% year over year, while paring its losses, with a loss of $104 million compared to a loss $414 million in the prior year. More importantly, its financial position improved during the first 39 weeks of 2020. Petco's sales growth accelerated, with revenue of $3.58 billion, an increase 9% year over year. The company's also reduced its red ink, with a net loss of $25 million, improved from a $94 million loss in the prior-year period.

Given the business and financial improvements over the past several years, Petco bears watching.