Please ensure Javascript is enabled for purposes of website accessibility
Log In Help Join The Motley Fool
Free Article Join Over 1 Million Premium Members And Get More In-Depth Stock Guidance and Research
By Catherine Brock - Jan 18, 2021 at 9:46AM

The numbers tell the story.

A quote often attributed to Mark Twain is, "The two most important days of your life are the day you were born and the day you find out why." But in the modern era, the day you start saving for retirement could be a contender for the next spot on the list. According to a recent study, too many workers are putting that day off for too long -- and it's a mistake that could end up costing them $500,000.

The Q4 2020 Retirement Security Survey, sponsored by financial manager and insurance company Principal, finds that people start contributing to their workplace retirement plan at an average age of 32. That's understandable for the saver who doesn't lock in a full-time job until that age. But it's a costly delay for those who follow the more common path of settling into full-time work in their mid-20s. 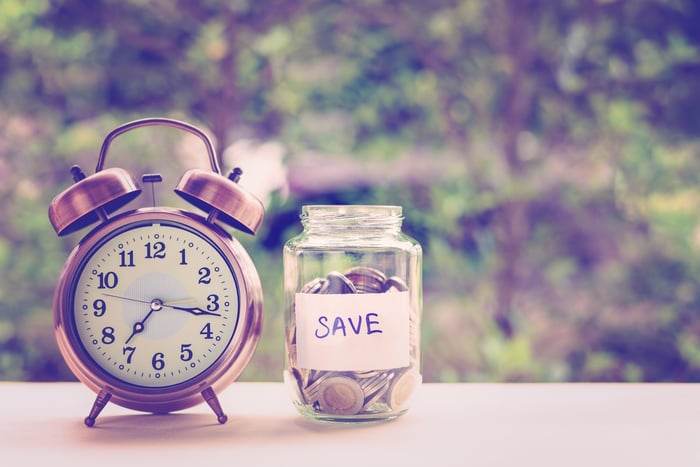 If you start saving in your 20s

Here are the numbers. The average annual salary for a worker aged 25 to 34 is $47,736, according to the U.S. Bureau of Labor Statistics. And the average contribution rate in 401(k) plans is 12.9% including employer match, according to Plan Sponsor Council of America. Those numbers equate to retirement contributions totaling about $6,150 per year. A 32-year-old who wants to retire at 65 has 33 years to invest and grow those contributions. Assuming that retirement portfolio performs in line with the long-term stock market average of 7% after inflation, the saving balance at retirement will be about $730,000.

That amounts to $29,200 in annual retirement income, assuming this saver will withdraw 4% each year.

But what if a retiree started saving earlier, say at age 25? You might be shocked at the difference just seven years will make. Under the same assumptions, the balance at retirement is almost $500,000 more, or just under $1,228,000. That amount would support annual retirement withdrawals of $49,120, nearly $20,000 more than the original scenario.

The takeaway should be clear: Your 20s is the time you can make the most from your savings contributions. The money you set aside early in your career has four decades to grow -- if you're invested in the stock market, that's enough time for every $1 contributed to grow to $15 or $16. Twenty years later, you'll only have time to grow each $1 to $3 or $4.

If you're already older than 30

Say your 20s have passed you by without a penny stashed in a 401(k). Now what? A comfortable retirement is still within your reach as long as you're willing to fund a bold contribution rate. If you start saving at 32, for example, you'd have to save about $10,000 annually to reach the $1,228,000 milestone. At a salary of $48,000, that's 21% of your pay, including your employer match. Wait until you're 42, and your total contribution rate would have to be 40%.

These numbers don't account for annual salary increases or inflation, but these factors can often offset each other anyway. That's why it's dangerous to put off saving until you're making more. Saving doesn't get any easier over time even as your salary rises, because your living expenses are likely on the rise too.

Another famous quote is, "The secret of getting ahead is getting started." And that could be the very best retirement savings advice there is. Start contributing regularly to a retirement account today -- a 401(k) if you have one or an IRA. It's a decision that could ultimately add six figures to your retirement savings balance.