Please ensure Javascript is enabled for purposes of website accessibility
Log In Help Join The Motley Fool
Free Article Join Over 1 Million Premium Members And Get More In-Depth Stock Guidance and Research
By Keith Speights - Jan 26, 2021 at 10:30AM

That early outperformance for the healthcare stock was at risk as J&J announced its fourth-quarter results before the market opened on Tuesday. As it turned out, though, investors had nothing to worry about. Here are the highlights from Johnson & Johnson's Q4 update. 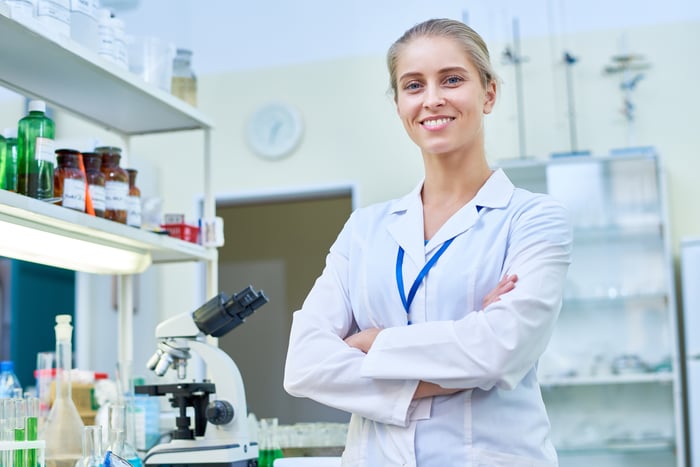 Johnson & Johnson reported revenue in the fourth quarter of $22.5 billion, an 8.3% year-over-year jump. This total easily beat the average analyst estimate of $21.67 billion.

The company announced net income in Q4 of $1.7 billion, or $0.65 per share, based on generally accepted accounting principles (GAAP). This reflected a significant decrease from the GAAP earnings of $4 billion, or $1.50 per share, posted in the prior-year period.

Unsurprisingly, Johnson & Johnson's pharmaceutical segment was its primary growth driver in the fourth quarter. The segment's sales soared 16.3% year over year to $12.3 billion. However, pharmaceutical growth was lower -- 8.4% -- when adjusted for acquisitions and divestitures.

The story wasn't as impressive for the company's other two segments, though. Consumer health sales inched 1.4% higher year over year to $3.6 billion. Medical device segment sales slipped 0.7% from the prior-year period total to $6.6 billion.

The company's GAAP bottom line looked much worse than it did in the prior-year period, primarily because of $2.9 billion in net litigation expenses.

Johnson & Johnson anticipates sales for full-year 2021 will be between $90.5 billion and $91.7 billion. This range is a little higher than the average analyst estimate of $89 billion. The company projects adjusted earnings per share for full-year 2021 will be between $9.40 and $9.60. The low end of that range is well above the consensus Wall Street estimate of $8.99.