Please ensure Javascript is enabled for purposes of website accessibility
Log In Help Join The Motley Fool
Free Article Join Over 1 Million Premium Members And Get More In-Depth Stock Guidance and Research
By Rhian Hunt - Jan 28, 2021 at 10:22AM

Fashion retailer Express Inc. could be the next battleground for Redditors vs. hedge funds.

Game and consumer electronics retailer GameStop has undergone a spectacular short squeeze recently, with its stocks exploding from approximately $40 a week ago to over $260 currently. Hedge funds massively shorted the stock, but retail investors organizing on Reddit and Twitter bid its value up by going long on the company.

Now, Bloomberg reports, other heavily shorted companies which have suffered especially from the pandemic may be next in line for a short squeeze. One such company is fashion retailer Express (EXPR -5.24%), whose stock sold hovered around $1 in early January. The company's shares have since risen by some 406%, trading at $4.60 as of this writing. 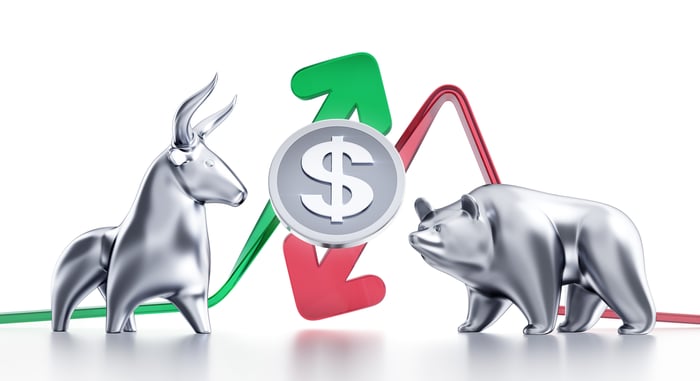 The Express pop reflects a larger trend at hand in the market today. Many retail investors have profited massively from the GameStop play, and are now looking for more profitable short squeezes. But Express, a company assigned a $1.50 price target by some Wall Street analysts, isn't likely to share the same fate.

That's because Express' short interest, or the amount of shares outstanding which investors plan to short, stands at just 13%. This figure is large compared to the market as a whole, but GameStop's short interest was over 100% of its shares when it began to trade up. Additionally, many popular trading platforms -- including millennial favorite Robinhood -- have halted trading on several highly volatile stocks, which include GameStop and Express, for the time being. While trading is expected to eventually resume, this tactic is a method to stop the squeeze and prevent further volatility and mania from taking over, potentially preventing some retail traders from losing too much money on the presumably inevitable way down.

It's possible that the momentum from GameStop transfers over into Express as eager investors seek the next gold mine on the cheap. But the movement is more likely to splinter, as several companies remain in discussion for the next short squeeze target and Express, while ripe for improvement, has far less short interest and therefore far less opportunity to squeeze.