The Chinese search company received an analyst upgrade and launched its autonomous driving platform in Guangzhou.

Shares of Baidu (BIDU -1.61%) climbed as much as 10% today after getting an upgrade from a Chinese investment bank. The company also announced a new mobility-as-a-service (MaaS) autonomous driving platform. As of 3:15 p.m. EST, the stock was up 6%.

China Renaissance boosted its rating on Baidu shares from hold to buy. Analyst Ella Ji increased her price target from $170 to $325, which represents 17% potential upside from yesterday's closing price. Ji argues that Baidu's Apollo autonomous driving technology has hit an inflection point thanks to strong regulatory support from the Chinese government and advances in artificial intelligence (AI). 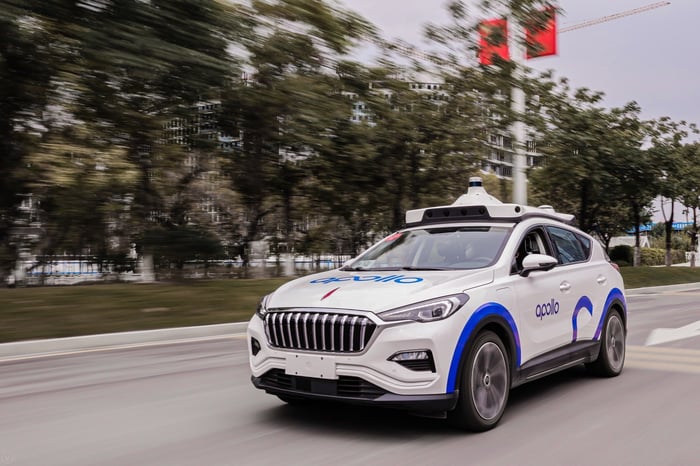 The Chinese search technology company has deployed its multimodal autonomous driving platform in the city of Guangzhou. It will leverage a fleet of Apollo robotaxis and robobuses to let users order transportation services on demand. The company says that it now has 40 autonomous vehicles in the fleet across five different vehicle categories.

The MaaS platform can handle a diverse set of use cases with its intelligent transportation technology, according to Baidu, and users can reserve a ride from either the Baidu Maps or Apollo Go mobile apps. There are currently 50 pickup stations, and Baidu plans to deploy more robotaxis and build 1,000 more pickup stations as it conducts trial operations.

Separately, Bloomberg reported that Baidu is looking to raise $3 billion in new debt, which the company plans to use for general corporate purposes.