Please ensure Javascript is enabled for purposes of website accessibility
Log In Help Join The Motley Fool
Free Article Join Over 1 Million Premium Members And Get More In-Depth Stock Guidance and Research
By Alex Carchidi - Feb 12, 2021 at 6:20AM

It could have a major impact on the competitive international vaccine market.

When someone comments on "the Sputnik" these days, you can bet your hat that they're not talking about the first satellite to reach low Earth orbit -- they're talking about the Russian coronavirus vaccine candidate. While the present-day Sputnik vaccine didn't take first place in its own race as its satellite predecessor did, it's still worth knowing about,  because it changes the global competitive landscape for COVID vaccines.

According to phase 3 clinical trial results published last Tuesday in the prestigious medical journal The Lancet, the Sputnik V vaccine is around 91% effective at preventing severe disease. That's great news not just for Russia, but for the rest of the world, because we desperately need more coronavirus vaccines.

But Sputnik V's efficacy, price, and storage characteristics might make it a threat to other companies that are vying for a slice of the vaccine market pie. AstraZeneca (AZN 1.05%) could be especially vulnerable, and even Pfizer (PFE -0.15%) and Moderna (MRNA 8.73%) could face headwinds. Let's investigate why. 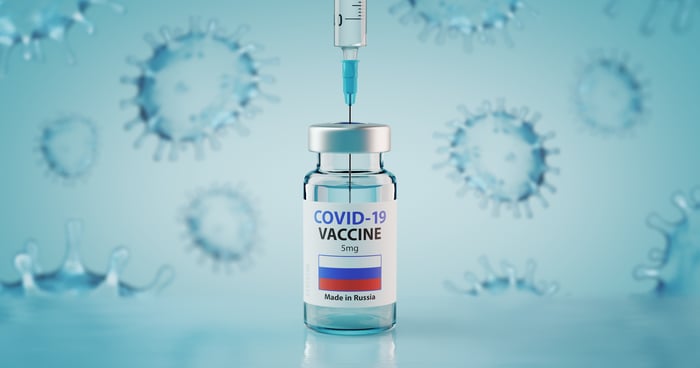 What makes the Sputnik a threat?

The Sputnik is made by the Russian government's Gamaleya Research Institute of Epidemiology and Microbiology, and its international distribution is being controlled by the Russia Direct Investment Fund, so there's no single stock for investors to buy to benefit from sales. Instead, it might make sense to consider avoiding shares of the companies that the vaccine could outcompete.

Right now, the Sputnik is being considered for approval by regulators in dozens of countries, including major markets like the European Union. It's already approved in Russia, Argentina, the United Arab Emirates, and Hungary, along with a handful of other countries. More than a billion doses have already been ordered.

Internationally, one dose of the Sputnik is expected to cost around $10, so a full course of two doses will be around $20. This makes it significantly cheaper than the vaccines from Moderna, which costs $37 for each dose in a two-dose course, and Pfizer, which costs $19.50 for each dose of two. Those two vaccines are slightly more protective, at around 95% efficacy, but the difference is hardly worth worrying about so long as people are still scrambling to get vaccinated.

More importantly, both Moderna's and Pfizer's vaccines require storage in medical freezers at significantly colder temperatures than the Sputnik, which can tolerate the comparatively balmy temperature of a refrigerator. That makes it a more attractive choice for healthcare systems in underdeveloped regions, which may not have ultracold freezer space to spare -- or any freezers at all.

Beating the Sputnik on cost per dose may not be enough

In contrast to Pfizer's and Moderna's candidates, AstraZeneca's vaccine has similar storage characteristics to the Sputnik, so it could serve the same markets. While its efficacy is lower at 70%, AstraZeneca has pledged to sell it to developing nations at cost, which is expected to be a maximum of $3 per dose, or $6 for a full course. On paper, it seems like the AstraZeneca candidate could be a good deal for cash-strapped healthcare systems, compared to the Sputnik: They could vaccinate many more people for the same cash outlay, while using the same storage and distribution infrastructure.

The problem is that AstraZeneca may not be able to manufacture enough doses to meet its obligations anytime soon. Recently, the company revealed that it would deliver only 31 million of the 80 million doses it had promised to the EU by the end of the first quarter. This problem is expected to drag on through the second quarter, in which it may deliver around half as many doses as agreed upon.

Now, imagine how powerful the EU is as a purchasing bloc. If the European Union can't get the doses it ordered from AstraZeneca, the myriad of developing countries seeking to purchase coronavirus vaccines from it probably don't have a chance. That's a huge market for the Sputnik to serve, and it may not be ceded easily later on.

Expect Pfizer, Moderna, and AstraZeneca all to experience stiff competition for coronavirus vaccine sales in developing markets where the Sputnik may be approved.

If AstraZeneca continues to struggle with manufacturing enough doses, it may find that customers outside Europe and North America are loath to place large orders. In the long run -- once its pledge to sell doses at cost has run its course -- that could mean the company will have a harder time profiting from sales. I wouldn't jump to sell AstraZeneca stock, but it's worth being wary if you were thinking of making a purchase.