Please ensure Javascript is enabled for purposes of website accessibility
Log In Help Join The Motley Fool
Free Article Join Over 1 Million Premium Members And Get More In-Depth Stock Guidance and Research
By Rick Munarriz - Feb 18, 2021 at 10:05AM

If you're betting on when cruise lines will start sailing again you may as well take the over. Norwegian Cruise Line Holdings (NCLH -11.99%) became the latest operator to push out its restart date. Norwegian Cruise Line announced on Tuesday that it's canceling all of its May sailings. Carnival (CCL -10.30%) (CUK -10.47%) and Royal Caribbean (RCL -10.20%) are still hoping to get at least some of their vessels sailing in May, but we've seen the two larger players cave shortly after Norwegian Cruise Line moved its goal posts before.

It was less than a month ago that Norwegian Cruise Line nixed its April sailings. The cadence of the cancellations isn't kind. We're talking about another month of cash burn, but also another month of disgruntled passengers. It's also important to get into the mindset of the kind of person with a booking for an April and now May cruise that will never happen. These are likely people who already had a 2020 cruise wipe out, opting for enhanced future cruise credit on a springtime cruise the following year. We're talking about hardcore believers in Norwegian Cruise Line, and they're getting punished for their loyalty. 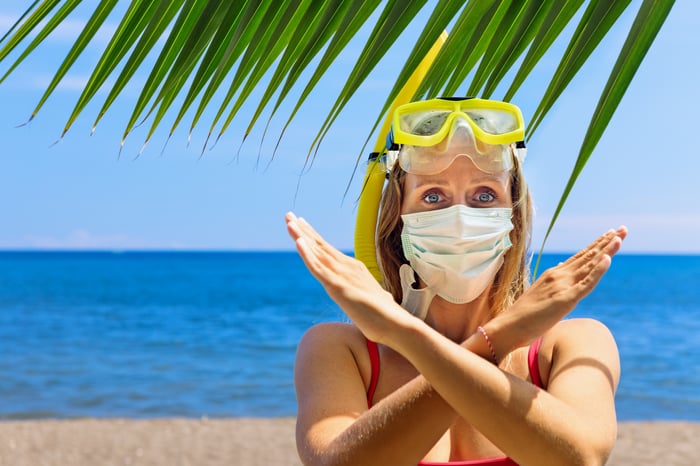 The suspended sailings aren't Norwegian Cruise Line's fault, but that doesn't matter. The big three cruise lines are always at the mercy of elements beyond their control, but this isn't some storm they can navigate around, a problematic port they can opt out of visiting, or even a norovirus outbreak that will suspend operations for some deep sanitizing between sailings. This pandemic has cast a prolonged outage for Norwegian Cruise Line's only business. If it's able to start sailing again in June -- and that's a big if right now -- it will be 14 and a half months between revenue-generating sailings.

In some ways it's just as well. With international travel restrictions tightening and the vaccination process playing out slowly it's not as if folks would be flocking to cruise ships in healthy numbers if they were available. There's also a pesky global recession gnawing away at leisure travel budgets.

A silver lining here is that Norwegian Cruise Line, Carnival, and Royal Caribbean have raised a lot of money during the disruption. There will be share dilution and bloated debt levels to deal with down the line, but for now the important thing is that they all have the means to stay afloat even when the actual ships are not.

Money will matter even when the cancellations stop. After more than a year without sailings there's going to be a lot of marketing dollars spent on reminding folks about the merits of sea travel. There will also be a lot of skeptical vacationers who may need to be convinced that cruising is safe. The road back will be long for the cruise lines, and the problem is about more than just another month of canceled sailings. Investors need to be careful here. Optimism has been in short supply despite the surprisingly buoyant enterprise values that the three publicly traded stocks are fetching.