The stock market was having a mixed day on Monday, with the S&P 500 index modestly lower and the Dow Jones Industrial Average slightly higher at 3 p.m. EST. However, hotel operator Marriott International (MAR 4.76%) was outperforming the market handily, with shares up by about 6% for the day and hitting a fresh 52-week high.

It may seem odd that a hotel operator is reaching a new high today. After all, the hotel business is still running at a fraction of pre-pandemic business levels, and Marriott recently reported a 50% year-over-year revenue decline in 2020 and its first annual loss since the financial crisis era. 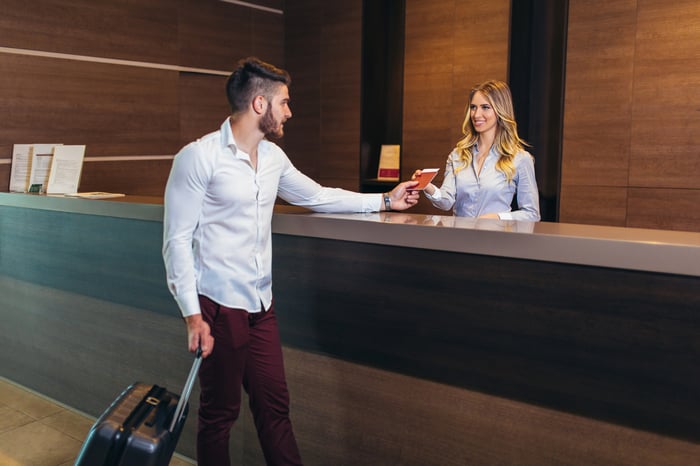 However, it appears that several analysts see a very bright future for Marriott in a post-pandemic world, and that's what is driving the stock higher today. BMO Capital raised Marriott's price target to $135 from $126, while Morgan Stanley increased the hotel stock's price target to $123 from $120. (Marriott's stock price is about $143.50 as of this writing.)

To be sure, it's typically a good idea to take stock analyst upgrades with a big grain of salt. Nothing has changed in Marriott's business as a result of the analysts' moves. However, the fact that so many analysts are bullish on the hotel operator (at least four other analysts raised price targets last week as well) is making investors think there might be more pent-up demand for travel than originally thought.