Please ensure Javascript is enabled for purposes of website accessibility
Log In Help Join The Motley Fool
Free Article Join Over 1 Million Premium Members And Get More In-Depth Stock Guidance and Research
By Zhiyuan Sun - Feb 23, 2021 at 5:45AM

After doing some good on its promise of a comeback, Aurora has encountered yet another roadblock.

Aurora Cannabis (ACB 7.75%) was one of the most volatile stocks of 2020. As debates about whether or not the once-giant pot grower could face bankruptcy, its shares saw violent swings upwards of 60% and downwards of 70%. Over the course of 12 months, however, the stock managed to disappoint with a decline of 40% as of Feb. 22.

At this point, investors are probably feeling pretty anxious, and wondering if Aurora can indeed turn around its operations and finally produce a profit this year. Anything can happen. But there are more reasons than not why I still think a profitable year is a near impossible achievement. 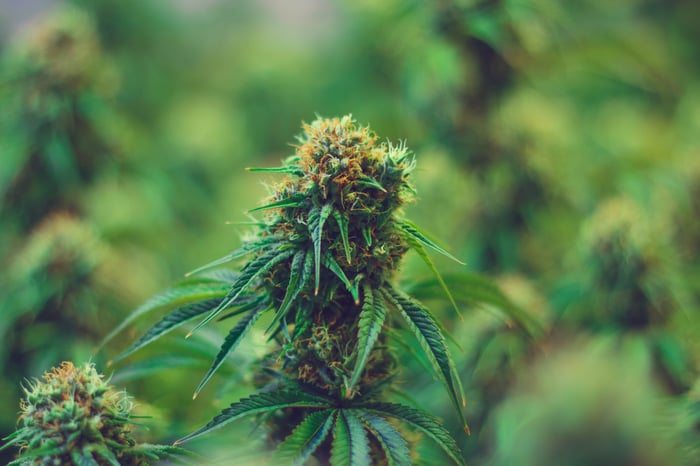 After a truly terrible year, Aurora saw its revenue rebound 11% over the prior year's quarter in Q2 2021 (ended Dec. 31) to 70.3 million Canadian dollars. At the same time, its earnings before interest, taxes, depreciation, and amortization (EBITDA) amounted to negative CA$12.1 million. Although that's still not impressive (or positive), its EBITDA did improve by CA$53.1 million over Q2 2020.

More importantly, its year-over-year cash use decreased by 74% to CA$70.5 million. That's undoubtedly promising, as the company faced CA$221.6 million in impairments to its plant, property, and equipment to rapidly shrink its size of operations when it was staring down mounting losses.

There's finally light at the end of the tunnel; the Canadian legal-marijuana market appears to have rebounded after a difficult year of oversupply. Aurora now sells 15,253 kg of dried cannabis per quarter, a sharp increase of 61% compared to the same period last year.

The bad news is that it looks like Aurora is being squeezed out of the U.S. market. Back in May 2020, the company acquired Reliva LLC for a multiple of 8.5 times sales. At that time, Reliva had a trailing-12-month revenue of $10 million. Fast forward two quarters, and the cannabidiol (CBD) subsidiary generated just $2.7 million in sales in the second half of 2020. That's despite Reliva having its products sold in 23,000 stores across North America.It seems like the company overpaid for its acquisition, yet again.

It doesn't help Aurora that the U.S. legal marijuana market is seeing intense competition due to the possibility of federal decriminalization on the horizon. Even if that happens, Aurora still won't be able to export its cannabis south -- it would take full legalization to allow that. This means that strategic acquisitions are vital to Aurora's effort to control a piece of the $19.6 billion CBD market opportunity in the U.S. So far, it's not off to a great start. 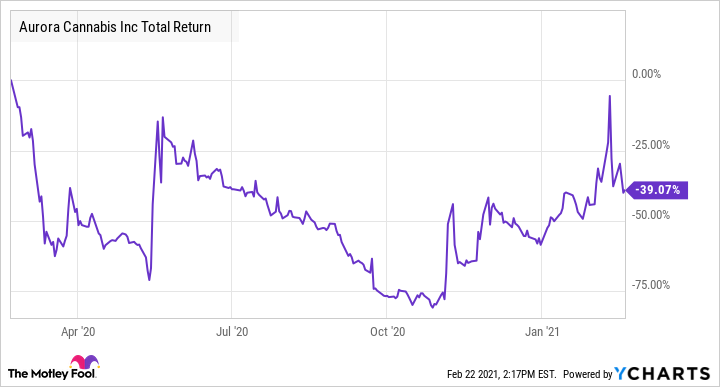 Despite having more than CA$565 million in cash on hand, Aurora also has CA$493.3 million in debt and convertible liabilities. What does this mean for investors? They have to realize that Aurora isn't out of the woods yet. In the past five months alone, Aurora's shares outstanding have also increased by about 77.39 million to 197.39 million -- a major dilutive hit to investors.

Over the next year, I expect the company will sell more stock to pay for its expenses. Simply put, there is no quick fix to Aurora Cannabis' slew of problems.

But to some, Aurora may be an interesting speculative buy while it's trading at 7 times revenue, far less than the 16 times and 119 times sales its industry peers are trading at. It's on track to regain what it lost in the Canadian market, and international medical marijuana revenue is climbing 562% year over year. Considering the serious underperformance of Aurora's U.S. segment and cash burn habits, however, I'd bet nothing on the company more than a small stake.