The big biotech wants to bolster its late-stage pipeline with a potential new stomach cancer treatment.

On Thursday, Amgen (AMGN 0.87%) became the latest big drugmaker to announce an acquisition in 2021. The biotech giant told investors that it will acquire Five Prime Therapeutics (FPRX) for $1.9 billion in cash.

Five Prime Therapeutics is a clinical-stage biotech that doesn't have any approved products for sale yet. Amgen is eager to acquire it now for access to bemarituzumab, a potential first-in-class treatment for stomach cancer. 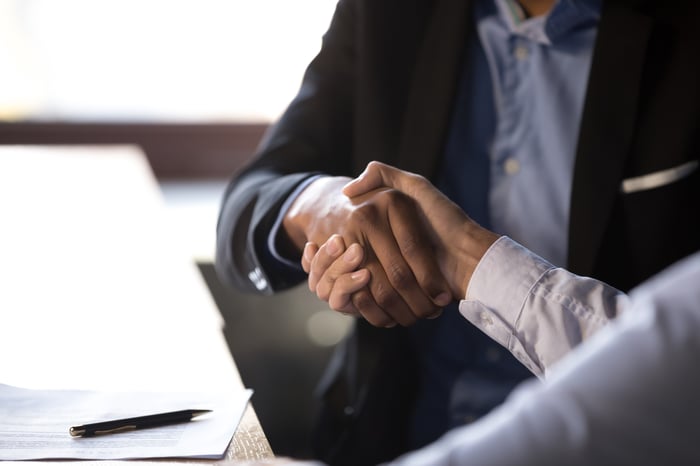 In a phase 2 trial with 155 patients, adding bemarituzumab to a standard chemotherapy regimen lowered patients' risk of death by 42% compared to standard chemo on its own. Bemarituzumab is a lonely member of a potential new class of cancer treatment that blocks the production of fibroblast growth factors. Among patients with tumor cells that overexpress bemarituzumab's target, FGFR2b, the survival benefit appeared even stronger.

In 2020, Amgen reported total revenue that grew 9% year over year, but a lack of new drugs emerging from its late-stage pipeline has investors worried that the company can't continue growing at this pace for much longer. The acquisition of Five Prime, which is expected to close by the end of the second quarter, adds a candidate ready to begin phase 3 trials, at a price Amgen can comfortably afford.

As a treatment for stomach cancers, there's a good chance that the investment in Five Prime will work out well for Amgen shareholders. It's still a long shot, but there's also a chance bemarituzumab could become an effective new treatment for a lot more cancer patients with tumors that it targets.