Please ensure Javascript is enabled for purposes of website accessibility
Log In Help Join The Motley Fool
Free Article Join Over 1 Million Premium Members And Get More In-Depth Stock Guidance and Research
By Jim Halley - Mar 6, 2021 at 6:40AM

The pandemic puppy boom is real, and so are sales for these three pet stocks.

Many of us got some new coworkers this past year -- the four-legged kind. Pets became a welcome distraction for individuals and families under stay-at-home orders. According to industry data tracker PetPoint, a pandemic-driven spike in animal adoptions began in mid-March 2020. Animal welfare organizations had an estimated national adoption rate of 58% at the beginning of the month, and had jumped to 85% by the end of the first month of shutdowns. Because of the adoption uptick, it's worth thinking about the businesses behind the years of veterinary care that these furry friends will require.

Heska Corporation (HSKA -1.16%), Idexx Laboratories (IDXX -1.65%), and PetIQ (PETQ -1.72%) are three companies connected to pet medicine and veterinary care that have seen double-digit revenue gains this year -- and are poised to achieve even more. 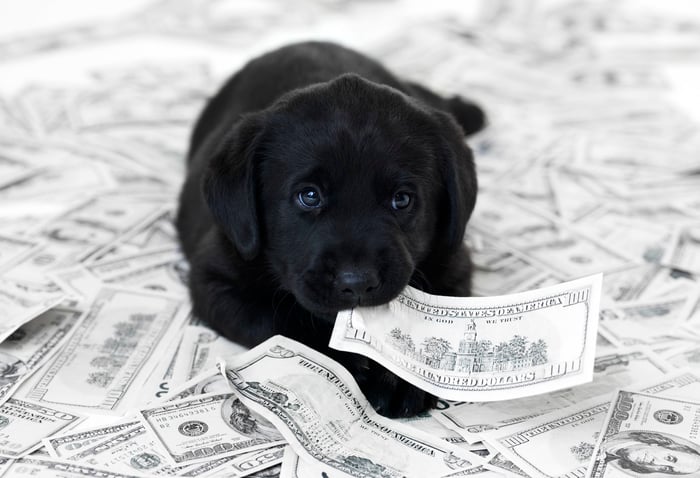 1. Heska is branching out

Heska's shares have climbed more than 70% over the past year. The company makes veterinary diagnostic and specialty healthcare products such as hematology analyzers and radiographs, plus consumables such as allergy shots and heartworm prevention products.

In 2020, Heska broadened its international scope with the $110 million purchase of the scil animal care company ("scil"), a maker of veterinary orthopedic implants, surgical instruments, dental supplies, and laboratory reagents and supplies that was headquartered in Germany, but did business in 24 countries. Heska also bought Spanish veterinary imaging and blood-testing company CVM.

The acquisition binge continued this January, when the company announced it was buying Lacuna Diagnostics, which specializes in point-of-care diagnostics, digital cytology, and telemedicine, giving Heska an entry into the telemedicine and professional services markets.

Heska Executive Vice President and CFO Catherine Grassman said on the company's fourth-quarter earnings call that she expects 2021 revenue to come in between $225 million and $235 million. Heska CEO and President Kevin Wilson provided even more optimism, remarking that he expects the company to do $250 million in sales in 2022.

2. PetIQ is the smart choice

PetIQ, a pet medication and wellness company, has increased revenue every year since the company went public in 2017. This past year, PetIQ reported $780.1 million in sales, a rise of 10% year over year, with adjusted EBITDA of $117.2 million, a rise of 59.4% from 2019. Over the past year, the company's share price has climbed nearly 9%.

The company isn't profitable yet and posted a net loss of $81 million in 2020. But that figure includes its $95 million purchase of the Capstar line of products from Elanco Animal Health last summer.

That purchase should help fuel growth this year, as Capstar produces the best-selling oral over-the-counter flea treatment product in the U.S. The company said in its fourth-quarter report that it expects more than $20 million in incremental EBITDA this year from Capstar products.

While $725.7 million of the company's revenue came from its products division, where sales were up 17.6% compared to 2019, PetIQ's service sector was slowed considerably by the pandemic and will likely fare better this year.

The company operates 3,400 veterinary clinics in 41 states, inside retail centers such as Walmart, Target, Tractor Supply, and Pet Supplies Plus, but many locations were closed at times due to pandemic restrictions. The segment posted yearly revenue of $54.3 million, down 41.1% year over year. 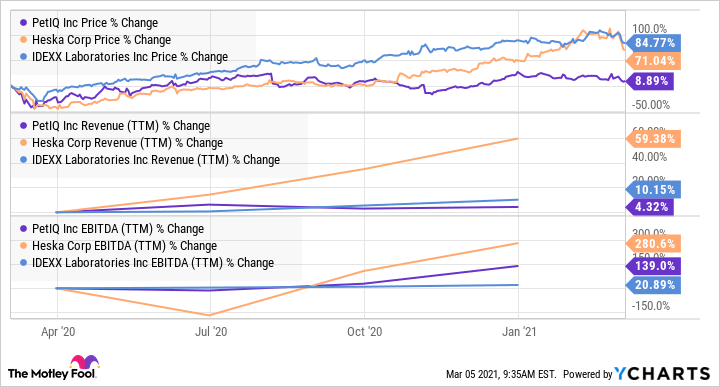 Idexx Laboratories, which focuses on veterinary diagnostics, veterinary practice software, and water microbiology testing, has seen its stock climb more than 84% over the past year. The company reported revenue of $2.7 billion for the year, a rise of 12% year over year, led by 16% growth in its companion animal group (CAG) diagnostics revenue.

The rise in CAG revenue did particularly well considering pandemic headwinds that slowed the placement of the company's diagnostic equipment in veterinary offices. Those sales were buoyed by strong consumable sales and increased sales in the company's rapid assay tests.

What's most striking about Idexx is the strength of its profit margins. The company's gross profits increased 24% to 56.8% in the fourth quarter. Idexx said it expects revenue in 2021 to be between $3 billion and $3.1 billion.

No fleas on these stocks

The growth in spending on pet care is a trend that has legs, and it was already increasing before the pandemic. According to the American Pet Products Association (APPA), people spent an estimated $99 billion on their pets in the U.S. in 2020, up from $95.7 billion in 2019. The APPA's annual pet owners survey said that 67% of households have a pet, compared to 56% of households in 1988.

The global veterinary medicine market, estimated at $29.2 billion in 2020, is expected to expand with a compound annual growth rate of 7.4% through 2028, according to Grandview Research.

One thing all three of these stocks have going for them is diversification. Idexx did well in companion group care and its livestock, poultry, and dairy group, making up for a flat year in its water testing segment. PetIQ's clinics were impacted by pandemic-related closures, but the company's products division more than made up for the shortfall. Heska's sales of high-end diagnostic veterinary equipment may have been slowed by the pandemic, but its veterinary consumables and rapid assay tests proved a booming business. I'll be watching these stocks' businesses closely in 2021 to see if a return to normal creates even more sales growth in all of their speciality areas.

Could the Pandemic Pet Surge Make Investors in This Stock Rich?

Why PetIQ Is in the Doghouse Today

Why PetIQ, Inc. Is Soaring Today