Please ensure Javascript is enabled for purposes of website accessibility
Log In Help Join The Motley Fool
Free Article Join Over 1 Million Premium Members And Get More In-Depth Stock Guidance and Research
By Jason Hawthorne - Mar 6, 2021 at 7:23AM

It depends on whether providers are willing to sign up for lower costs and better outcomes.

It's not often you find the combination of a hot new investing trend and a boring old government program, but that's exactly what Clover Health (CLOV -3.63%) offers. The company sells Medicare Advantage plans, focusing on customer experience and leveraging machine learning and artificial intelligence to achieve better outcomes.

After exploring a traditional initial public offering and a direct listing, Clover went public in January after agreeing to combine with a special purpose acquisition company (SPAC) backed by former Facebook executive and current venture capitalist Chamath Palihapitiya. Now that the public can own a stake in the mission-driven insurance company, are the shares worth buying? 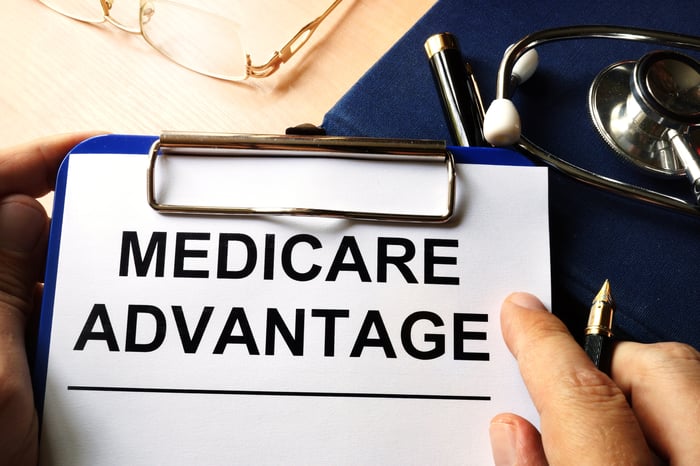 Original Medicare is made of two parts. Part A pays 80% of covered hospital expenses and part B pays the same portion of covered doctor expenses. Private insurers offer parts C and D. Medicare part D is to cover prescription drugs that original Medicare doesn't cover, while part C, otherwise known as Medicare Advantage, can replace original Medicare with insurance like the offering from Clover Health.

The market penetration of Medicare Advantage has been increasing, with 24.1 million enrollees in 2020, up from 5.6 million in 2005. That means 39% of the 62 million Americans who are eligible make use of these plans. The Congressional Budget Office (CBO) estimates the number will rise to about 51% by 2030. It's a $270 billion market growing at 14% annually, and it's currently dominated by United Healthcare (UNH 0.12%) and Humana (HUM -1.46%), which together make up 44% of all enrollment. That opportunity has attracted a lot of competition, and the upstarts believe the incumbents have been slow to adapt in a technology-driven world.

Despite industry dominance by a few companies, there are a lot of options for those eligible for Medicare Advantage programs. The number of programs available to the average beneficiary has climbed for the past decade, topping out at 31 this year. That's a lot of competition for a start-up like Clover, and like many of those battling for market share, Clover believes its edge comes in the ability to use technology and data to improve outcomes and lower costs.

The company's Clover Assistant software is what sets it apart. It provides data-based, personalized insights for patients, and puts the information into physicians' hands at the point of care. Theoretically, this should improve decision-making by reducing variability, leading to better, lower-cost outcomes. An example is the company's readmission risk model. If Clover's software has forecast that a patient is a high risk for a costly return after being discharged from the hospital, caregivers can set up interventions like home health, telemedicine check-ins, and prescription delivery to address the issues that would typically lead to a readmission or emergency room visit.

In a crowded market, the company has expanded its membership and revenues but has yet to turn a profit, even on an adjusted basis. Management predicts the growth will continue this year, albeit at a slower pace. Like many start-ups, Clover is sacrificing profitability in its strides to get bigger. The company plans to continue investing in additional geographies beyond the 34 counties it currently serves, and its impressive 25% market share in its 13 established markets supports the strategy. In April, management plans to launch direct contracting with physicians to increase the number of patients covered by its program. Internal projections estimate the offering could quadruple membership.

Clover faces a lot of competition to unseat large incumbents in the Medicare Advantage market, but the company seems to be succeeding in geographies where there's enough history to evaluate it. Management is counting on its direct appeals to physicians to create a new growth channel, betting that the promise of improved outcomes and lower costs will be strong enough incentives to gain adoption.

Investors, meanwhile, are counting on the bet to pay off. The company has yet to show profits, and it will need to continue growing rapidly to demonstrate that it can add sales faster than expenses. If it can do this, shares of the tech-based insurer could be a bargain as it becomes a major player for Medicare Advantage. If not, investors will no doubt move on in favor of one of the many other companies promising to use data and technology to address the most glaring problems with our healthcare system. Healthcare investors may want to wait for the company's expansion into new territories to prove itself as a path to profitability before adding shares.