Please ensure Javascript is enabled for purposes of website accessibility
Log In Help Join The Motley Fool
Free Article Join Over 1 Million Premium Members And Get More In-Depth Stock Guidance and Research
By Alexander Carchidi - Mar 6, 2021 at 5:30AM

There's a credible chance that it will boom later this year.

There's more than one way to get involved in the marijuana industry gold rush. Some investors prefer the (relative) stability of an established competitor, whereas others are keen to buy smaller stocks that have more room to grow. If the second category sounds like your style, you're in the right place.

OrganiGram Holdings (OGI 7.52%) is one of the smaller and scrappier cannabis companies, and it may be going to great places. While it's still trying to hit its stride in its home market of Canada, it's recently been scrambling to keep up with demand. And, its international ambitions are only starting to blossom, meaning that it could have a significant and long-term upside. But, is March the right month to invest, given that its latest earnings report was packed with less-than-good news? 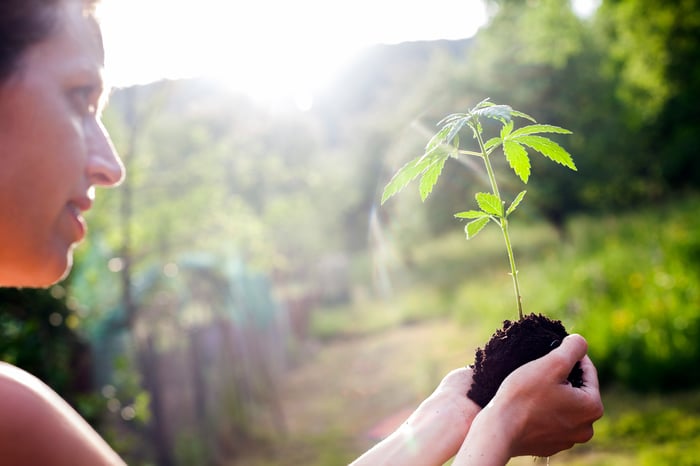 Overall, the company is moving in a favorable direction by increasing its market coverage and revenue potential. Last year was a blitz for OrganiGram's portfolio, which expanded by a total of 47 new cannabis products. And it plans to launch around 14 new products this quarter, which will help it to match its offerings to what consumers are looking for. Pushing so many new vaporizers, edibles, and cannabis flower products at once may make costs rise, but if it leads to stronger brands and consumer loyalty, it'll be well worth it in the long run.

There's reason to believe that OrganiGram's products will outcompete others based on their perceived quality, too. Its Edison brand recently won several top awards for its dried marijuana flowers and emulsified cannabis oils, which bodes well for consumer adoption.

Another positive piece of information is that the company is scaling up its production in response to rising consumer demand in the Canadian recreational market, as well as the perceived benefits of economies of scale. If this move pays off, production costs should drop and revenue should rise, which could subsequently supercharge the stock's growth. Management's plans could take a quarter or two before shareholders will see any positive changes in the earnings reports. In the meantime, retail investors have taken an interest in the stock, which could have favorable consequences down the line.

Finally, at the tail end of 2020, OrganiGram's financial strength improved considerably. Its long-term debt fell by 48% over the last quarter thanks to a payment of $55 million. The cash for this payment came from a stock offering in November, which brought in $69 million.

While it's true that OrganiGram's adult-use segment is bringing in more revenue over time, total net revenue fell by 23% year-over-year, and the company isn't profitable. At the same time, cost of sales increased by a whopping 47%, and selling, general, and administrative (SG&A) costs rose by 18%. These rising expenditures may be linked to the ongoing scale-up efforts, so they aren't necessarily a cause for alarm -- yet. Likewise, the drop in total net revenue is linked to lower selling prices and cannabis wholesale revenue compared to the prior year, so it isn't necessarily a dealbreaker, though it is a red flag. If revenue growth stalls from quarter to quarter this year, investors may have a problem on their hands.

Then there's the fact that the company's adjusted earnings before interest, taxes, depreciation, and amortization (EBITDA) crashed by 212%, while its adjusted gross margin plummeted by 30% to reach 10%. Keep in mind that the "adjusted" prefix before these metrics indicates that the figure has been recalculated in light of changes to the fair value of the cannabis products in the inventory. So, even when making concessions for price fluctuations, there are other problems afoot regarding the company's efficiency.

Until management demonstrates that revenue is actually rising while costs are falling -- potentially in a quarter or two -- OrganiGram is a bit too risky for me to recommend purchasing without reservations. Furthermore, I'm interested to see how its newly launched products fare at capturing market share in Canada.

On the other hand, if you're interested in getting in on the ground floor with a cannabis growth stock and you're comfortable with an investment on the riskier end, OrganiGram is a good option to buy this month. Just don't be too surprised if you end up waiting a while for its earnings to start along an undeniably positive trajectory.