Please ensure Javascript is enabled for purposes of website accessibility
Log In Help Join The Motley Fool
Free Article Join Over 1 Million Premium Members And Get More In-Depth Stock Guidance and Research
By Billy Duberstein - Mar 7, 2021 at 11:05AM

After being pumped up by Reddit traders in January, Canopy fell back to earth in February, despite solid earnings.

Shares of Canopy Growth (CGC -12.07%) fell 18.1% in February, according to data provided by S&P Global Market Intelligence. The Canadian pot stock fell despite a relatively good earnings report and outlook in the early part of the month.

So why the fall? Likely, this was just a come-down after cannabis stocks soared in January following the Georgia Senate runoff, which fueled speculation about U.S. federal legalization. Canopy has a huge cash horde thanks to its big investment from Constellation Brands (STZ 0.79%), as well as some optionality in the U.S. should that happen. However, for now, the company remains primarily a Canada-focused cannabis company. 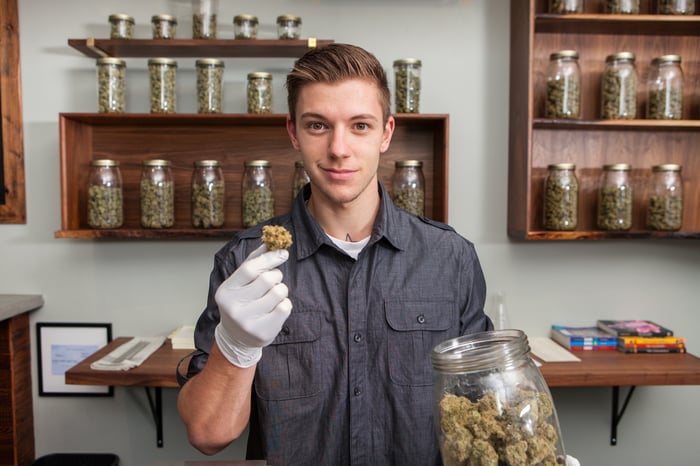 Following the Democrats taking control of the U.S. Senate in January, there was increased chatter over pot stocks on the Wallstreetbets forum of Reddit -- the same forum that caused a giant short squeeze in heavily shorted stocks such as GameStop (GME 6.81%) in late January. Not only did Canopy rise, but several of its peers did as well.

Of course, it's ironic that so many Canadian stocks skyrocketed in January, since it's unclear if and how they will be able to enter the U.S., if and when cannabis is federally legalized. Still, certain brokerages like Robinhood don't give access to over-the-counter stocks, which is where most U.S. cannabis stocks trade, since they're technically illegal businesses. That left many Robinhood traders with Canadian stocks to pick from, which ironically trade on major U.S. exchanges.

Canopy did deliver some solid results in its fiscal third quarter. Revenue rose 23% to CA$152.3 million, and adjusted EBITDA losses narrowed from CA$97 million in the year ago quarter to CA$68.4 million last quarter. While the growth was good to see, it was still a bit disheartening that the company is still losing so much money, and gross margins actually fell five percentage points, as oversupply hurt prices per gram in Canada.

The company did, however, give a long-term outlook for its path to profitability. Encouragingly, Canopy projects accelerating 40% to 50% annualized revenue growth over the next two years, as it introduces new products such as edibles and drinks. Combined with its cost-savings plan, Canopy now projects it will be operating cash flow positive by fiscal 2023 and free cash flow positive by fiscal 2024.

The stock actually rose the day after earnings, yet fell hard in the days following that, as the Reddit-fueled rally petered out, and rising long-term interest rates hurt unprofitable growth stocks.

It was a good sign that Canopy is outlining specific targets for profitability, as many of the Canadian stocks have burnt through cash trying to achieve growth, while oversupplying the Canadian market. The $1.6 billion in cash on the balance sheet is also nice.

Still, with a market cap of nearly $12 billion, even after its recent drop, Canopy still looks a bit expensive relative to its near-term prospects for profitability. Likely, in order to justify its valuation, it will eventually have to enter the U.S. market in a more meaningful way. Meanwhile, many U.S. multi-state operators are already establishing leadership positions in key states. They are also growing faster, with much better profit margins.

If your broker allows, I'd still prefer U.S. MSOs, or an ETF that tracks those U.S. companies over Canadian companies like Canopy.