The Nasdaq Composite (^IXIC 0.00%) has earned a reputation for being resilient, finding ways to claw back from the worst setbacks over the past year. On Tuesday, the index managed to show its resolve one more time, posting a huge gain as investors saw their confidence in high-growth stocks restored. As of 1 p.m. EST, the Nasdaq had soared more than 500 points, or 4%.

Yet there were a couple of notable stocks that not only missed out on the rally, but suffered huge declines. Both Acadia Pharmaceuticals (ACAD -1.87%) and Stitch Fix (SFIX 1.08%) were down sharply, as unexpected bad news surprised investors who'd been hoping for better things. 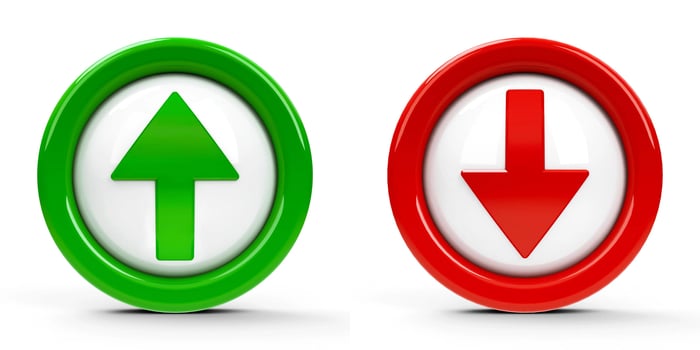 Shares of Acadia Pharmaceuticals lost almost half their value on Tuesday. The move came after the U.S. Food and Drug Administration made a pronouncement on a new drug application that Acadia had submitted for a key treatment in its pipeline.

Late Monday, Acadia disclosed that the FDA had found some deficiencies in its supplemental new drug application for Nuplazid, which is a candidate treatment for hallucinations and delusions associated with dementia-related psychosis. The notification didn't offer many details, but the FDA said it wouldn't discuss labeling and post-marketing issues at this point because of the deficiencies.

Nuplazid is already approved for treatment in patients with Parkinson's disease, so many had expected that the FDA would be completely comfortable with adding the new indications. Yet now, Acadia could face long delays or even a potential rejection of its request to broaden the use of Nuplazid. Given that investors had high hopes that the drug could become a blockbuster seller for Acadia, it's easy to understand why the company's shares are falling. It could be a while before we know more about exactly what the FDA is having trouble with or what Acadia will be able to do to address concerns.

Elsewhere, shares of Stitch Fix were down nearly 30% Tuesday afternoon. The subscription-based personalized apparel specialist reported fiscal second-quarter results that didn't live up to the high hopes investors had for the company.

Stitch Fix's numbers were mixed. Revenue climbed 12% from year-ago levels to move above the $500 million mark for the quarter. Client counts rose by more than 400,000 to nearly 3.9 million, giving Stitch Fix more new clients in the first six months of its fiscal year than it had in all of fiscal 2020. However, net revenue per client was down 7%, and the company reversed a year-ago profit with a substantial net loss.

But even more concerning was Stitch Fix's decision to pull back on its previous sales guidance for the full fiscal year. The apparel retailer now sees top-line growth of just 18% to 20% for fiscal 2021, down from previous projections for 20% to 25% growth.

CEO Katrina Lake has high hopes for the future, including rolling out direct buy offerings to new clients later this year and continuing to make progress in refining the selection of apparel in order to improve conversion and retention. However, Lake also noted that carrier delays and other operational challenges could hurt sales going forward. With so many companies seeing their shares shoot higher on optimism about the potential end of the pandemic, a reminder of COVID-19-related uncertainty came as an unpleasant reminder for shareholders.