Please ensure Javascript is enabled for purposes of website accessibility
Log In Help Join The Motley Fool
Free Article Join Over 1 Million Premium Members And Get More In-Depth Stock Guidance and Research
By Will Ebiefung - Updated Mar 16, 2021 at 3:08PM

These fast-growing companies could double your stimulus check.

President Joe Biden has signed a $1.9 trillion fiscal stimulus package that includes up to $1,400 stimulus checks for U.S. citizens earning less than $80,000 per year. Investors who don't need those funds to help manage their current expenses or to strengthen their emergency fund might want to consider putting some of that cash to work in the stock market and use it to potentially earn much more.

If you get access to $1,400 and are in good enough financial shape to invest those funds for at least three to five years, there are a couple of companies out there that have what it takes to double your money. Let's explore the reasons why Roblox (RBLX -8.01%) and Pinterest (PINS -0.99%) could make great stock picks. 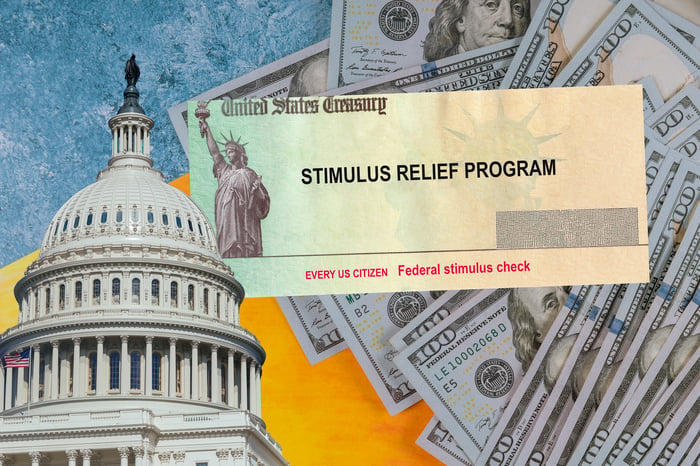 Roblox is an online game-creation platform that allows users to play and develop games of their own. The stock has only been publicly traded since March 10 but has already soared in value about 60% from its direct-listing price of $45 a share. More importantly, the company's disruptive business model sets it up for long-term success despite its already relatively high valuation.

Roblox's market cap has swelled to $43 billion -- significantly higher than when its January Series H capital raise pushed its valuation to $29.5 billion as a private company. At current prices, Roblox is worth more than established video game studios like Electronic Arts and Zynga, which trade with valuations of $38 billion and $11 billion, respectively.

But Roblox's disruptive business model helps justify its optimistic valuation. While competitors power top-line growth with blockbuster titles and expensive acquisitions, Roblox's users create its content, which could save on development costs and lead to faster organic growth. Roblox makes money through purchases conducted with its in-game currency "Robux," as well as some advertising and royalty fees.

Roblox expects daily active users (DAUs) growth of 6% to 12% (up to 36.4 million users) as the pandemic winds down in 2021. This guidance would be a dramatic deacceleration from nine months ended Sept. 30, 2020, when DAUs grew 82% year over year, and it suggests Roblox may be near saturation with younger players in the U.S. But management plans to drive growth by expanding its offerings to attract older demographics and by offering its current offerings in additional international markets. Company management expects full-year revenue of up to $1.5 billion in 2021, which represents 64% growth from the prior year.

Like Roblox, Pinterest uses a disruptive business model to set itself apart in an established industry -- in this case, e-commerce. While Pinterest is known for its female-friendly, image-sharing platform, it is also uniquely suited to an emerging online retail trend called "social commerce," which can power growth over the long term.

Social commerce allows companies to sell products and services within a social media experience. Research company eMarketer expects this market to rise roughly 35% in 2021 to $36 billion, and spending in this category will represent 4.3% of retail e-commerce sales in the U.S. Pinterest is poised to capture much of this growth because of how seamlessly advertisements can be integrated into its platform without sacrificing the user's immersion into the experience.

Pinterest is building on this advantage with partnerships. Last year, the company teamed up with e-commerce giant Shopify to launch a new channel to help Shopify merchants turn products from their stores into pins on the platform. This move could help Pinterest monetize its large user base.

Fourth-quarter revenue soared 76% year over year to $706 million as global monthly active users (MAUs) grew 37% to $459 million. The company generated a generally accepted accounting principles (GAAP) profit of $208 million in the period, which suggests the company could be on the verge of full-year profitability. Management has been tight-lipped with bottom-line guidance, but they expect revenue growth in the low 70% range in the first quarter.

Innovation is the key to massive growth

Companies rarely deliver multibagger returns by following the beaten path. If you want to double your stimulus check, you should bet on innovators -- companies that serve established markets in exciting new ways. Roblox and Pinterest fit the bill by disrupting the video game and e-commerce industries. Both stocks look poised for massive growth.