Please ensure Javascript is enabled for purposes of website accessibility
Log In Help Join The Motley Fool
Free Article Join Over 1 Million Premium Members And Get More In-Depth Stock Guidance and Research
By Nicholas Rossolillo - Mar 18, 2021 at 7:45AM

The lines between the physical and digital worlds are blurring.

After its public debut earlier this month, video game platform Roblox became one of the latest companies offering a way to bet on the "metaverse" -- a virtual world where real people can play, interact, and create. With over 32 million daily active users using and creating games on Roblox, a virtual alternate reality similar in some ways to what was portrayed in the book and film Ready Player One suddenly isn't so farfetched.

But this gaming platform isn't the only way to get in on the blurring of the physical and digital worlds. If you think the "metaverse" will be a thing, Zoom Video Communications (ZM -6.24%), Facebook (FB 0.71%), and Unity Software (U -7.57%) are worth a look too. Let's take a closer look at how these three tech stocks are tapping into the metaverse trend. 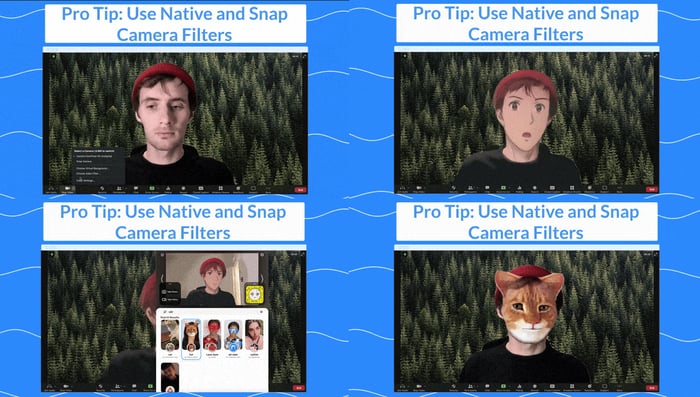 Think this idea of a virtual universe is hogwash? There's a good chance you've already participated in an early iteration of the metaverse in the form of a Zoom meeting.

Zoom has a stated mission to make video communications "better than in-person meetings." You'd likely agree it's hard to beat the experience of meeting someone face-to-face -- especially loved ones. But from a business standpoint, Zoom already has plenty of advantages. Meeting on Zoom is an efficient time and money saver, and built-in functionality like screen and document sharing and chat functions makes it an incredibly useful tool in the modern office (think work-from-home).

But is Zoom really a bet on the metaverse? In a way. While users aren't immersed in a virtual representation of a physical room that they can explore and interact in, the company has brought person-to-person interaction via video into the mainstream. And if you've used any video filters or backgrounds in your Zoom meetings, you get the idea of a customizable avatar of yourself in digital format. Where else could you turn yourself into a talking cat during court proceedings?

Now Zoom has no stated plans to create a more immersive digital universe in which to meet with friends and family or for school and work, but the idea isn't hard to imagine. Zoom reported 467,100 business customers with at least 10 employees, and it doesn't disclose how many smaller businesses and individual users it has.

Nevertheless, it's safe to say tens of millions -- if not hundreds of millions -- of people around the globe have used or are using the cloud video service. It wouldn't be too hard for the company to build on its lead here and make its video communications even more immersive in the near future. Oh, and over $4.2 billion in cash and equivalents, zero debt, and a free cash flow profit margin of nearly 43% in the final months of last year aren't going to hurt either.

Speaking of incredibly profitable software companies, Facebook is one of the most valuable organizations on the planet, with a current market cap of nearly $800 billion. And though it has ventured into troubled waters in recent years (especially on the political front, where it's facing a lawsuit against its acquisition of Instagram and WhatsApp in 2012 and 2014), Facebook itself is in no real trouble at the moment. Its revenue grew 22% last year, generating an enormous sum of free cash flow totaling $23 billion.

And what exactly is Facebook doing with its incredibly lucrative business model? For one, working hard on virtual reality (VR) via its subsidiary Oculus. This isn't small potatoes either. Facebook's "other" revenue grew 72% year over year in 2020 to $1.8 billion, much of that attributable to Oculus (though the exact figure isn't disclosed).

The latest generation headset, the Oculus Quest 2, is quite approachable -- both in price and usability. It doesn't require connection to a computer (just a Facebook account, of course), and starting at just $299 and complete with quite a few free-to-use apps, the Quest 2 gets users introduced to the VR experience right out of the box. And with 3.3 billion people around the globe using a Facebook service on a monthly basis for communicating, playing games, and shopping, Oculus could be the fast-pass to get a metaverse into the mainstream. Of course, the Quest 2 isn't perfect. Improvements can still be made to make VR even more approachable. However, Facebook CEO Mark Zuckerberg indicated on the fourth-quarter 2020 earnings call that new and improved hardware built on the Oculus platform is already in the works.

Other big tech firms will no doubt play catch-up to Facebook (Apple is reportedly working on its own VR headset and/or smart glasses) as it demonstrates proof-of-concept technologically and commercially for VR, but for now, the social media titan is in the lead. If there was only one bet I could make on the metaverse, at this juncture it would be Facebook.

3. Unity Software: Video games are only the beginning

Unity got started (and is still mostly used) as a development platform for video games. From creation to deployment of apps, Unity is a full-blown ecosystem for developers with app end-users of some 2.2 billion globally. But it's been well-documented that Unity has aspirations far beyond just video games.

Unity is being adopted by architects and engineers as a collaborative tool for design. Volkswagen is using the software to design and market vehicles in 3D. These real-time workspaces could go much further as augmented and virtual reality tech advances.

For example, spaces can be virtually created before they are built in real life for design review, and project site visits can be made from afar once construction has begun. Other use cases include training modules and interfaces that guide workers through a task using an augmented reality or smart glasses headset.

Heading back to the entertainment realm for a moment, video games aren't the only application Unity can handle. The company has been tapped to virtualize concerts, sporting events, and other live conferences to be attended virtually. Live video gaming contests that fully immerse spectators are already a thing too. The point is, for a full-blown metaverse to exist, the world needs more creators to build it. Unity's flexible platform is helping make that possible.

Like Roblox, Unity is also a recent IPO (it made its debut last autumn). As such, share prices of this fast-growing company can be incredibly volatile. However, it's turning the corner on profitability and is armed with nearly $1.8 billion in cash and equivalents and no debt. It's not a well-known name right now, but Unity's software could become an increasingly important piece of the economy as the digital world starts to blend with the real. Trippy? You bet. But that future is already in the process of being built.

How Zoom Must Adapt to Stay Relevant