Please ensure Javascript is enabled for purposes of website accessibility
Log In Help Join The Motley Fool
Free Article Join Over 1 Million Premium Members And Get More In-Depth Stock Guidance and Research
By Jason Hawthorne - Mar 19, 2021 at 7:57AM

Digging into the popular investors' portfolios teaches us to look beyond Wall Street labels.

It might be a surprise to find out that two investors with virtually opposite approaches -- one who invests in large, cheap, iconic companies and the other who rose to fame on the heels of her outlandishly bullish (and accurate) predictions about "overvalued" stocks -- would have the same company in their portfolios. Perhaps the bigger surprise is the stock you might expect them to both own that they don't. Let's take a look at the two companies in question and what these successful investors must see. 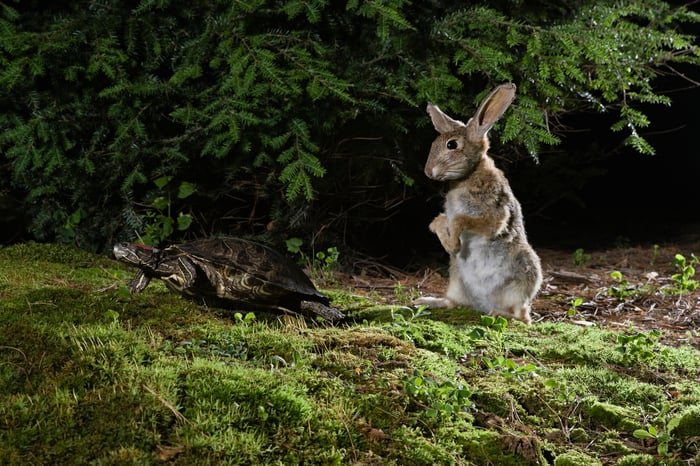 The surprising stock they both own

First, it's doubtful that Warren Buffett actually bought Snowflake (SNOW 2.45%), the cloud data warehouse-as-a-service company. In recent years, lieutenants Todd Combs and Ted Weschler have been making more of the investment decisions, and the $750 million in stock Berkshire Hathaway (BRK.A 2.10%)(BRK.B 2.12%) purchased before the initial public offering (IPO) certainly doesn't match the investment style of the legendary nonagenarian. In fact, Buffett hasn't bought an IPO since Ford in 1956. The company does fit the style of Cathie Wood at ARK Invest, a global asset management company focused on disruptive innovation. That said, Snowflake is putting up numbers that would get any investor's attention.

The company recently reported its full fiscal year earnings, and the growth was jaw-dropping. Fourth-quarter revenue of $178 million was up 116% year over year. Topping that, remaining performance obligations, what customers have signed on to buy, was up 213% over the same point last year. The company has 77 customers that spend more than $1 million per year. That number is up from 65 just three months earlier. Management is projecting between 92% and 96% revenue growth for the current year. Snowflake posted an operating margin of negative 92%. Losing money never sounds good, but that is closer to profitability than the negative 135% for the year ending January 2020 or the negative 192% in 2019. If the company really wanted to turn a profit it could just curb its spending on sales and marketing.

It may not be a typical Buffett stock, but Snowflake definitely fits the mold of Wood's investments. The ARK founder has become synonymous with innovation, building a portfolio around futuristic themes such as genomics, space exploration, mobility-as-a-service, and the next-generation internet. It's the last theme, encompassing artificial intelligence and cloud computing, where Snowflake fits. The company's pay-as-you-consume, real-time access to data and analytical tools is a giant leap forward compared to the slow, bogged-down daily or weekly updates companies have long come to accept with managing their internal data warehouses.

Another stock in ARK's portfolio touches both the data-related and genomic revolution strategy. Based on his other holdings, it's actually surprising Buffett doesn't own it too.

The surprising stock they don't both own

The Oracle of Omaha has been buying up the stocks of pharmaceutical companies in the past year. In the third quarter of 2020 he added shares of Pfizer (PFE -0.15%), AbbVie (ABBV -0.38%), Merck (MRK 0.83%), and Bristol Myers Squibb (BMY -1.87%). Every member of that group gives investors between 3% and 5% in dividends annually. Other than Bristol Myers, they all hover around a $200 billion market cap as well, and Bristol Myers is nearly as large at $136 billion. Similarly, Novartis (NVS 0.22%) is a $211 billion company yielding 3.8%. Perhaps the reason Buffett hasn't bought this big pharma stock is that it is a Swiss company. It turns out, Buffett favors American brands in food, cola, and apparently drugmakers.

Novartis did catch the eye of Wood, thanks to its work toward developing a leading digital and data science platform for drug discovery. Although it isn't a pure play on any of ARK's strategies, Wood considers it a deep value pick, to be held through a bull market and then sold in times of volatility to add to higher-conviction growth names that get beaten down.

It may be counterintuitive for an investor who prides himself on unemotional investing to buy into one of the hottest IPOs of last year, but once Snowflake started trading, the investment doubled almost immediately. Similarly, few would think someone famous for a $4,000 price target on Tesla and presentations that literally map out the future of entire industries would own a nearly 4% dividend paying pharmaceutical company with no growth. However, there is a great lesson in these examples.

Don't settle for the labels Wall Street places on companies or investors. Value and growth are just words. Investors may have tendencies that define them in the public eye, but that oversimplification may obscure the characteristics that draw their interest in an investment. Although Buffett likely didn't buy shares of Snowflake, it may have been the customer loyalty, leadership team, and consistent march toward profitability that made Combs or Weschler comfortable buying Snowflake shares. Wood may have a lot of fast-growing companies that don't make a profit, but it's the innovation that compels her to invest, not just growth rate. In the case of Novartis, innovation came in the form of a mega-cap pharmaceutical company.

Instead of focusing on the labels Wall Street slaps on a company or following Warren Buffett or Cathie Wood into the stock, try to identify the characteristics of the business that they find compelling. Try approaching the company as if you were going to inherit it, learning how dedicated customers are, where money gets spent to attract new ones, or what advantages it has over competitors. These answers will lead to a more informed investment decision and better outcomes over time.

It turns out, both Snowflake and Novartis are compelling to different types of investors for a variety of reasons. Exploring those reasons can teach us a lot more about investing than focusing solely on who owns them. The more we know about a company, the easier it is to figure out whether the next sell-off is something to fear or a great opportunity.

3 Revolutionary Stocks That Could Make You Rich in 2021