Please ensure Javascript is enabled for purposes of website accessibility
Log In Help Join The Motley Fool
Free Article Join Over 1 Million Premium Members And Get More In-Depth Stock Guidance and Research
By Keith Speights - Mar 25, 2021 at 6:00AM

The telehealth company expects its growth to slow in 2021.

It's been a dismal year for American Well (AMWL -3.74%) so far. Shares of the telehealth-services provider have fallen close to 28%. And that downtrend could continue.

Amwell announced its fourth-quarter results after the market closed on Wednesday. The healthcare stock slipped over 1% in after-hours trading. Here are the highlights from Amwell's Q4 update. 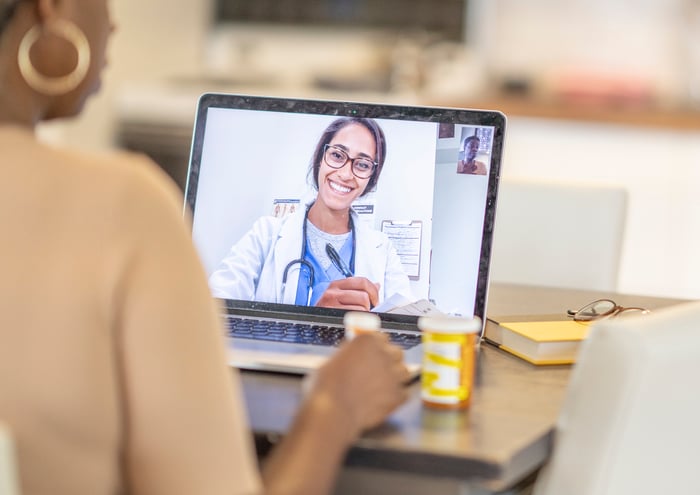 Amwell reported fourth-quarter revenue of $60.4 million, a 34% increase from the $45 million reported in the same quarter of the previous year. This result topped the average analyst's revenue estimate of $54 million.

The company delivered a net loss in Q4 of $50.6 million. In the prior-year period, Amwell posted a net loss of $22.7 million.

The telehealth provider ended the fourth quarter with cash, cash equivalents, and investments totaling a little over $1 billion. Amwell reported a cash position of $177.6 million as of Dec. 31, 2019.

It's easy to discern why Amwell's revenue grew considerably in the fourth quarter. The COVID-19 pandemic continued to drive the company's growth.

Around 23% of that total came from Amwell Medical Group (AMG) visits. AMG is a physician-owned medical practice that uses Amwell platforms to provide virtual care.

The company's bottom line suffered as operating expenses increased significantly. Amwell's gross margin also slipped to 37.4% from 44.7% in the prior-year period, due primarily to a shift in the company's revenue mix.

Amwell projects that revenue for full-year 2021 will be between $260 million and $270 million. The midpoint of this range reflects a year-over-year increase of 8%. Analysts were expecting revenue to fall close to the upper end of the range.

Investors will definitely want to watch the changing competitive dynamics for Amwell. Internet giant Amazon.com recently announced plans to expand its Amazon Care telehealth services to other employers beginning this summer. It's too early, though, to predict what the impact of Amazon's entry into the market might be for Amwell.

1 Threat Teladoc and Amwell Investors Should at Least Consider