Please ensure Javascript is enabled for purposes of website accessibility
Log In Help Join The Motley Fool
Free Article Join Over 1 Million Premium Members And Get More In-Depth Stock Guidance and Research
By Alex Carchidi - Mar 28, 2021 at 8:54AM

Yes, but it'll take a while.

Why would someone want to invest in a company that seems to be constantly making headlines for all the wrong reasons? Between manufacturing snags, clinical trial inconsistencies, repeated hiccups with regulators on both sides of the Atlantic, and a global public clamoring for coronavirus vaccination, AstraZeneca's (AZN 1.05%) reputation is getting a beatdown, and its stock is struggling. What's more, these issues have played out every few months over nearly a year's time, making them much easier to integrate into a narrative of a mounting meltdown.

As monumental as the company's stumbles may seem, however, investors need to keep their eyes on the long term. AstraZeneca's all-important coronavirus vaccine is reaching the public, and its reputation will eventually recover. Even with its recent troubles, its stock may start to grow sooner than one might expect. But could it double the investment of someone who bought it right now? 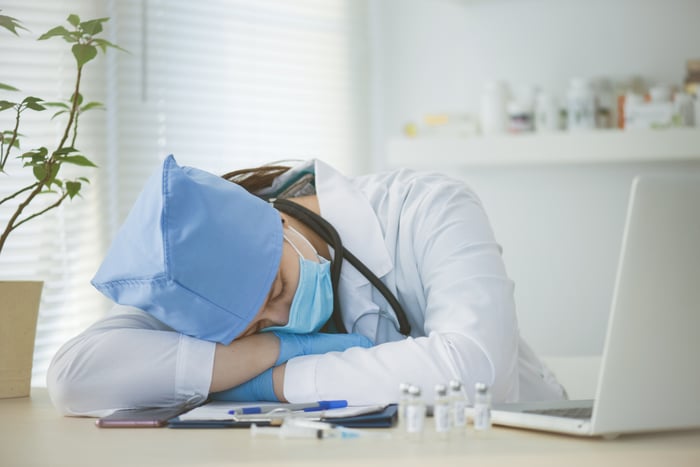 Let's start with the bear case first. In my view, the bearish argument against AstraZeneca is that the parade of issues with its coronavirus vaccine point to deeper problems in the way the company operates. Specifically, its clinical and regulatory operations -- both of which are critical for a company dedicated to making pharmaceuticals -- appear to be the source of the most recent fumbles.

In November, management claimed that the company's coronavirus vaccine, developed jointly with Oxford University, was 70% effective. Upon closer inspection of the results, however, observers recognized that the claim of 70% efficacy was in fact derived from two separate clinical trials with slightly different parameters.

Soon after, it became apparent that a manufacturing issue had led to some of the doses in the trial being only half as large as they were intended to be. That cast doubt on the company's summarization of its data while also making its manufacturing and clinical operations look less than stellar. At the time, I noted that the mishaps had shaken my (previously quite strong) faith in the stock.

More recently, one of AstraZeneca's press releases in the U.S. used older data on vaccine efficacy than what was available. This led Dr. Anthony Fauci, head of the National Institute of Allergy and Infectious Diseases (NIAID), to say earlier this week that the issue with the data was "really what you call an unforced error because the fact is this is very likely a very good vaccine."

To say that such a criticism from one of the top regulatory leaders in a major market might make investors facepalm is a massive understatement. Once again, AstraZeneca's communication introduced more problems for itself, except now there's enough ammunition for naysayers to legitimately chart a trend from crisis to crisis.

Buckle up for a half-decade-long haul

As bad as all of this may seem, it's critical to keep a long-term perspective about the company's fortunes. Over the past five years, AstraZeneca's total shareholder return has more than doubled. Presently, its quarterly revenues are growing by 11.2% year over year, and its earnings are expanding even faster at a rate of 223.3%.

Remember, the coronavirus vaccine is only one revenue-bearing project among countless others in the company's portfolio. Plus, there are dozens of other medicines currently in development, each of which could catalyze further growth of the stock as they advance through clinical trials. Regardless of how successful the vaccine is commercially -- and if worldwide demand is any indication, it'll be a big hit -- shareholders can still look forward to moderate growth. 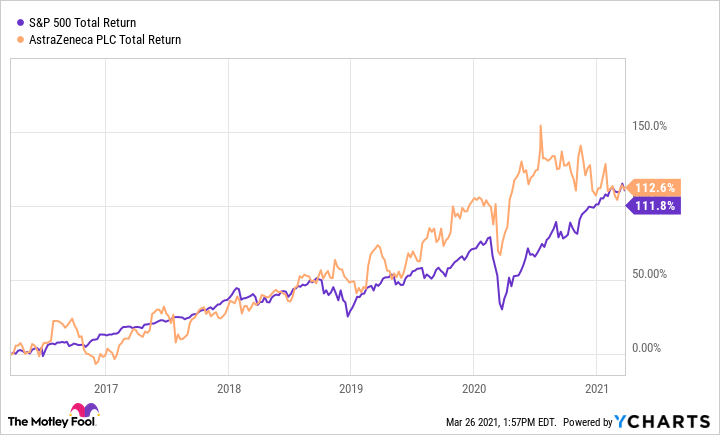 That said, AstraZeneca isn't about to explode overnight. Its market cap is simply too large for its share price to make big swings, even with the added boon of new vaccine revenue. That shouldn't dissuade potential buyers who have a long-term approach to the market, however.

Nor is the share price the only element to consider. The company's forward dividend yield of 2.82% is a key element of its total shareholder return, and its dividend has inched upward consistently over the last 20 years. So, buying the stock now might mean getting it at a discount, as its share price is still reeling from the effect of the recent slew of bad news.

Assuming that the vaccine revenue doesn't change dramatically from management's expectations and there are no major catastrophes in store (knock on wood), it's reasonable that AstraZeneca could once again double between now and 2026 or 2027. Don't wait too long to decide, though: Once the vaccine rollout gets back on track, the stumbles will recede from the market's memory quite quickly, and the stock might not be much of a bargain thereafter.