Please ensure Javascript is enabled for purposes of website accessibility
Log In Help Join The Motley Fool
Free Article Join Over 1 Million Premium Members And Get More In-Depth Stock Guidance and Research
By Jennifer Saibil - Apr 8, 2021 at 6:53AM

If you think there's already a Starbucks coffee shop on every corner, think again.

Starbucks (NASDAQ:SBUX) stock is up 6% in 2021 and 101% since its March 2020 lows, beating the broader market, despite sales declines for the past four quarters. That means investors are confident about the coffee company's prospects for the future, at least in the near term.

Despite hitting a nadir of 65% weekly comparable sales (comps) decline back in April 2020, Starbucks was able to continue operating and innovating -- and grow sales ever since.

The very reasons why Starbucks could thrive in an extremely challenging environment should drive higher sales and profitability even in a decade from now. Let's get in to the details. 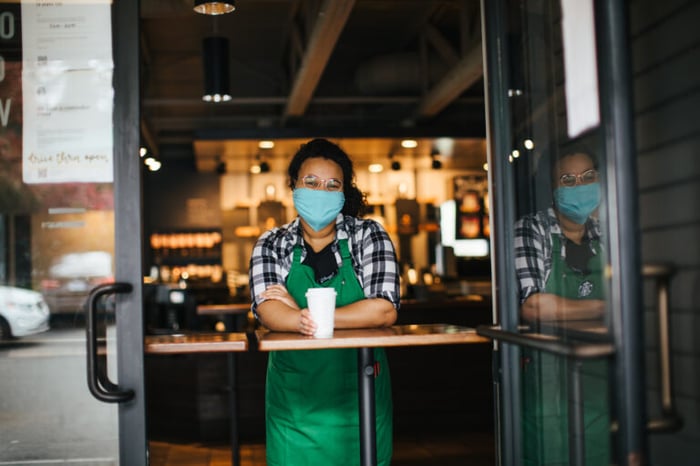 A thriving coffee brand, pandemic or not

Starbucks had opened several mobile order-only locations even prior to the onset of the pandemic, and it improved its rewards program with updated mobile order features. As a result, this segment increased contribution to total sales by a solid eight percentage points year over year -- from 17% to 25%. Not surprisingly, management sees this continuing to be an important part of growth.

The company uses sophisticated data-powered artificial intelligence to support its mobile platform, providing recommendations based on past orders and popular products to make finding and purchasing products quick and simple.

The Seattle-based coffeehouse chain set up new drive-thrus in order to offset sales declines from closed dining rooms, accelerated curbside pickup rollouts in many suburban locations, and began to use point-of-sale devices for quicker service. 75% of fourth-quarter U.S. volume was drive-thru and mobile, demonstrating the company's strength in those areas -- but more notably -- its ability to function in a challenging environment.

In every quarter since the pandemic started, the average ticket, or the amount spent on each order, increased, offsetting declining overall comps. Even though the company has a strong place at the office, customers love their Starbucks and brought it home in larger quantities when they couldn't get to work.

Some of these trends will likely reverse as the pandemic recedes. Average ticket will probably decrease while the amount of orders should go up. Again, suburban location orders may decline if people go back to offices. With the world embracing work from home, urban sales may not go back to what they were before, but some of those sales will stay at the suburban locations.

That's a huge key to its continued growth -- Starbucks' brand is unbeatable, both in the U.S. and globally. China is its largest growth market, and since it had an earlier timetable, it's already back to sales growth, with 5% comps growth in the first quarter.

Moving past the pandemic

The company is expecting total comps to increase between 18% and 23% in 2021. Considered next to a 14% comps drop in 2020, that's real growth beyond a pandemic comparison, picking up where it left off about a year ago.

A strong balance sheet was key to Starbucks' survival and ability to expand and launch new initiatives even during this challenging period. Several companies closed their doors for good over the past year, and solvency is key to remaining stable and implementing its plans for the future.

If the company can get past the pandemic, which it is expecting to do this year, investors can expect similarly high growth over the next 10 years. Here's why.

A Starbucks on every corner

Some of those are bound to be order-only locations, and although the company ended its leases for many urban locations, those will come back eventually as well, as businesses figure out a balance between office and home-based work environments.

Where will Starbucks stock go?

With the opening of 22,000 new stores, investors should expect revenue to increase a whole lot over the next decade. Without comps, 66% more stores translates to about 66% more sales. But comps should increase as well, as they typically do, which should make it much higher. If we use the 10.1% sales increase from the five years preceding the pandemic, that's a 161% sales increase in 10 years from now.

Why should we expect that to continue?

First, getting back to the brand, Starbucks has already established itself as the premier name in coffee. It would be very difficult for any competition to overtake it at this point. What's more, the company has invested in digital technology to keep pace with the world and secure its dominant position.

Starbucks stock gained more than 500% over the past 10 years, which translates to a market-beating 20% annualized per year. It also pays a growing dividend that has increased almost 600% over the past decade.

Starbucks stock isn't probably a 500% a year gainer, like some growth stocks, and it may not replicate its past-decade performance. But there's every reason to expect that the company can continue to deliver a great product and that its stock will rise in tandem.