Please ensure Javascript is enabled for purposes of website accessibility
Log In Help Join The Motley Fool
Free Article Join Over 1 Million Premium Members And Get More In-Depth Stock Guidance and Research
By Jeremy Bowman - Apr 9, 2021 at 8:52AM

It's always important for investors to keep an eye on the next generation's tastes and purchasing habits.

After all, as Amazon founder Jeff Bezos has said, brands have to stay young forever, and the youngest generation of consumers often has its finger most closely on the pulse of what's trending. That's why it's a good idea to pay attention to Piper Sandler's semi-annual survey of American teenagers, Taking Stock With Teens.

The just-released spring update of the survey uncovered a number of surprising findings -- female spending in apparel is quickly rebounding, 9% of respondents had traded in cryptocurrency, and 69% of teens plan to take the coronavirus vaccine when it's available to them. The report also sheds light on the brands that are winning with teens, which bodes well for their long-term future. Here are three, in particular, that stood out in the survey. 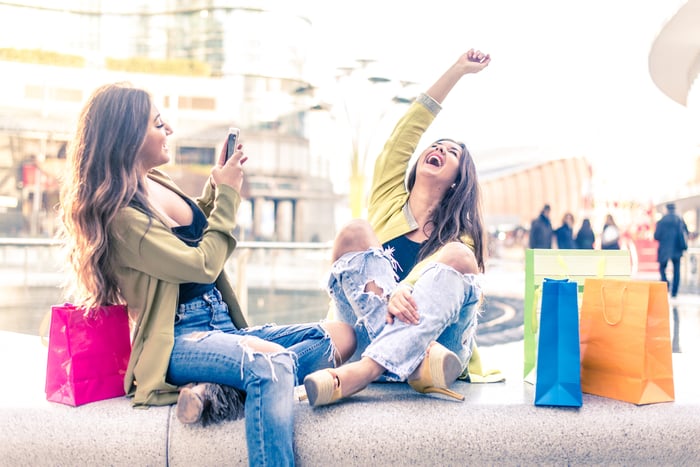 Apple (AAPL 0.96%) is the most valuable company in the world largely because of the success of the iPhone, which underpins a base of more than one billion installed devices and a fast-growing services business.

The good news for Apple investors is that the brand may be even stronger with teens than the generations that came before them. Piper Sandler's survey revealed that the iPhone surged to a new record with 88% of teens saying they owned one, up from 85% from a year ago. That's significantly higher than the iPhone's market share in the overall U.S. market at 64%, indicating the brand is entrenched with teens who are likely to maintain their loyalty as they grow older. Similarly, 28% of teens now own an Apple Watch, up from 25% a year ago and three times higher than the the average iPhone owner.

While Apple faces risks, including an increasing regulatory threat and a potential shift in computing platforms to augmented and virtual reality, losing the youngest generation of consumers doesn't appear to be one of them.

Plant-based meat is one of the newest trends in food, and surging consumer demand fueled triple-digit growth at Beyond Meat (BYND 6.03%) until pandemic-related slowdowns in the restaurant industry set in. However, the plant-based meat trend is still strong with Gen Z as the Piper Sandler survey found that 49% of respondents either consume plant-based meat or are open to consuming it, up from 47% in the fall survey. Another 15% of respondents said they do eat it, while 40% who said they hadn't tried it but were interested is significantly higher than 20% of adults who fall into that category.

Beyond Meat tied with Impossible Foods for teens' favorite plant-based meat with 33% listing each one as their top choice. However, 36% of teens who eat plant-based meat said they had no brand preference, showing the market is still in its early stages and evolving, giving the company ample opportunity to gain market share as the market expands.

While Beyond Meat faces near-term challenges around accelerating its growth, teens' favorable perception of the brand and the category is a positive sign for its long-term potential.

Nike (NKE -0.09%) has spent the last four years reorienting its business to make its direct-to-consumer channels its top priority, which include apps like SNKRS, its fitness club, and Nike's own stores. In the process, it has laid off thousands of workers and cut out retailers from mom-and-pop operations to department stores like Dillard's as it scales back its wholesale business. One reason it's doing that is to take more control over its brand and the customer experience, and that appears to be paying off with increased loyalty among its youngest consumers, which are a key demographic for the swoosh.

Nike has been the No. 1 apparel brand in Piper Sandler's survey for 10 years, and the company extended its lead in the latest report. While the stay-at-home effects of the pandemic may have helped push Nike's market share higher, it also widened its gap ahead of rivals like adidas, a sign the company is benefiting from more than just the broad athleisure trend. As a fashion brand, Nike gained two percentage points of share, and as a footwear brand, it improved nine percentage points with 56% listing it as their favorite. VF Corp's Vans came in second place at just 12%.

While Nike's sales growth has slumped during the pandemic, the results from the survey make it clear that its brand is as strong as ever.