That deal is Microsoft's second-largest acquisition ever.

Microsoft (MSFT 1.07%) announced this week an agreement to acquire Nuance Communications (NUAN) for $56 per share in cash. Taking into account Nuance's debt, the deal represents an enterprise value of $19.7 billion.

The tech giant agreed to pay this steep price to complete its second-largest acquisition ever, behind the $26.2 billion acquisition of LinkedIn in 2016, but the long-term benefits of the deal appear to be significant.

What Microsoft agreed to acquire

Nuance specializes in conversational and artificial intelligence (AI) capabilities for healthcare and enterprises. For instance, its voice recognition systems help physicians automatically document their activities, which allows them to better focus on patients. It also proposes solutions for enterprises, such as interactive voice response and biometrics security capabilities. 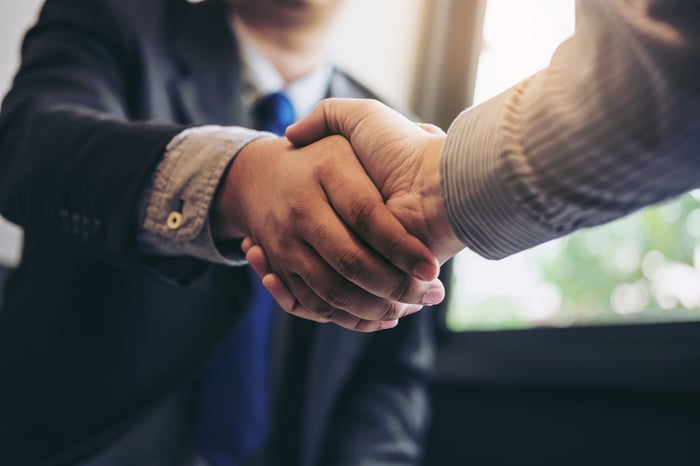 Microsoft and Nuance aren't strangers in the healthcare area. They partnered in October 2019 to improve interactions with patients using ambient clinical intelligence (ACI), which uses sensors and conversational AI to automate administrative tasks and documentation. And last year, both companies announced the integration of Nuance's ACI technology with Microsoft's collaboration solution Teams to bring those benefits to remote and virtual consultations.

Following its transition to the cloud over the last several years (using Microsoft's Azure infrastructure), Nuance's revenue should land in the range of $1.34 billion to $1.38 billion during fiscal 2021, ending on Sept. 30, according to management's guidance. That corresponds to year-over-year growth of 5% to 8%, excluding acquisitions.

Despite the steep $19.7 billion price, the transaction's scale remains modest relative to Microsoft's phenomenal cash-generating abilities. Just for comparison, the tech giant accumulated $75.2 billion of cash, cash equivalents, and investments in excess of total debt at the end of last year. It generated profits of $15.5 billion during the last quarter, up from $11.6 billion in the prior-year quarter. And its market cap exceeds $1.9 trillion as of this writing.

Yet at 14.5 times Nuance's forecasted full-year revenue, based on the midpoint of guidance, Microsoft is definitely offering a premium price in the context of mid- to high-single-digit-percentage revenue growth.

The successful integration of Nuance should boost Microsoft's Cloud for Healthcare initiative that it announced six months ago to improve the healthcare industry. As an illustration, Microsoft estimated the combination of both companies should double its total addressable market (TAM) in the healthcare provider space to nearly $500 billion.

Obviously, Microsoft will leverage and scale Nuance's conversational and AI capabilities with its large footprint and cloud infrastructure to capture a part of that huge opportunity.

But beyond healthcare, Microsoft could deploy Nuance's technology to its broader portfolio. For instance, it could expand the use of Nuance's conversational and AI capabilities in its Teams software package. It could also integrate these technologies with its flagship office suite Office 365 to automate tasks and offer features based on voice recognition. Ultimately, Microsoft could become a stronger competitor against voice-based assistants, such as Apple's Siri and Amazon's Alexa, depending on use cases.

Despite the steep price Microsoft agreed to pay, the acquisition of Nuance -- which should close by the end of this year -- makes sense for the tech giant over the long term. It's poised to boost its offerings with AI capabilities thanks to significant synergies with Nuance's technology across its vast portfolio and footprint.