Please ensure Javascript is enabled for purposes of website accessibility
Log In Help Join The Motley Fool
Free Article Join Over 1 Million Premium Members And Get More In-Depth Stock Guidance and Research
By Brett Schafer - Apr 13, 2021 at 9:01AM

Both companies would see an increase in demand if the $2 trillion plan is passed.

The big news out of Washington has been the Biden administration's new infrastructure bill, called "The American Jobs Plan." It proposes $2 trillion in spending over the next eight years -- to fix some of America's failing infrastructure, while also preparing the country for the future by stimulating the electric-vehicle and clean-energy markets. If passed, the bill will substantially increase demand in many different industries including construction, manufacturing, and utilities. 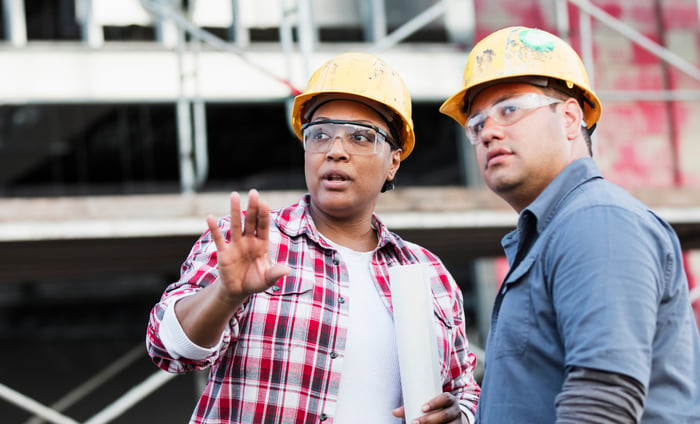 Autodesk sells software to businesses and people who make things. Its products include Revit, which is used by architects and construction managers; Maya, a special-effects and animation software package for the film industry; and many others. It also has a burgeoning product line in construction that it calls the Autodesk Construction Cloud. These software tools, which range from design to organization to communication, are sold to general contractors and other construction companies to help increase efficiency both at and away from the job site.

Last year, even with prolonged industry shutdowns due to COVID-19, Autodesk grew its revenue 16% to $3.79 billion while simultaneously generating $1.35 billion in free cash flow. Within the $2 trillion infrastructure bill, there are provisions for $115 billion in spending on bridges and roads, $80 billion for railways, and $85 billion for improving public transit. If and when projects within these industries get started, workers will likely use Autodesk software like AutoCAD, Civil 3D, and Navisworks to design and manage them.

Autodesk recently acquired Innovyze, a software-as-a-service (SaaS) platform that helps utilities manage assets and optimize their operations. The infrastructure bill proposes over $200 billion in spending across piping, water systems, and the electric grid. Some of those dollars would likely flow to Innovyze.

Lastly, Autodesk acquired Spacemaker, a software tool powered by artificial intelligence (AI), which helps architects and real estate planners build safer, more efficient, and better-looking homes. Biden's bill is currently allocating over $300 billion to home and school construction. Once Spacemaker goes global (it's from Norway), there could be a lot of future spending coming its way.

Intel has been around for decades, dominating the tech industry in the 1980s and '90s. However, it has recently lost its dominance to Asian competitors, especially Taiwan Semiconductor (TSM -0.72%). TSM helps Intel's competitors outsource high-quality chip manufacturing, which enables them to get their technology on par with Intel's without huge capital expenditures.

Recently, there have been some indications that the tide is turning back towards Intel. Intel's board of directors brought back Pat Gelsinger, who used to work at Intel before taking the CEO role at VMware, to be CEO at the start of 2021. As a part of this company transition, Gelsinger announced a plan to invest $20 billion into two chip factories in Arizona, and the start of a new business line called Intel Foundry Services. The foundry business is a direct competitor to TSM, and already has support from tech giants like Amazon and Microsoft. Of Biden's $2 trillion plan, $50 billion is currently allocated to semiconductor manufacturing. Given that Intel is one of the only scaled semiconductor manufacturers in the United States, it is likely a lot of those expenditures will go to help it build out its foundry capabilities.

An entire investment thesis shouldn't revolve around Biden's infrastructure bill: It isn't guaranteed to pass, and will not magically turn bad businesses into good ones. However, Intel and Autodesk are two quality businesses that would directly benefit from an infrastructure bill. And if this one passes, demand for their products should grow over the next few years and beyond.