Please ensure Javascript is enabled for purposes of website accessibility
Log In Help Join The Motley Fool
Free Article Join Over 1 Million Premium Members And Get More In-Depth Stock Guidance and Research
By Jennifer Saibil - Apr 16, 2021 at 8:35AM

Both retailers are on growth trajectories, but one seems to be racing ahead of the other.

The retail sector was greatly divided in 2020. Providers of essentials largely posted high sales growth. Those that focus on non-essentials suffered sales declines, sometimes crippling ones.

But many of those non-essentials retailers are already seeing growth again from their pre-pandemic levels, demonstrating their strength and their ability to withstand a challenging environment.

Target (TGT 0.81%) was among the best-prepared of the essentials retailers for the pandemic, and as the result, it delivered high comps growth. Apparel niche player lululemon athletica (LULU -3.39%) didn't fare quite as well, but its sales have rebounded. If you are limited to investing in either one of them, which one should you pick? 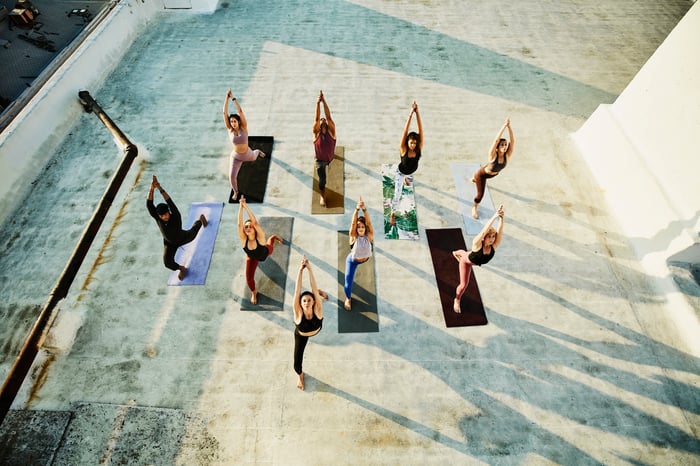 If you've only started investing recently, you might find it hard to believe that only five years ago, Target was struggling. Sales decreased year over year in 2016, and in 2017 they were still below 2015 levels.

But in pursuit of a turnaround, the company began to invest heavily in technology and developed the most comprehensive omnichannel program in its class. This brought about higher sales over the past four years and positioned it to perform well during the pandemic.

Comps have increased by more than 20% year over year for the past three fiscal quarters, and digital and same-day services both grew by triple-digit percentages in each of those quarters.

In its fiscal fourth quarter, which ended Jan. 30, revenues from its same-day services (which include drive-up, pickup, and Shipt delivery) increased by 212%, with drive-up sales growing by more than 500%. For the full fiscal year, earnings per share increased by 36% to $8.64.

Lululemon, on the other hand, is not an essentials retailer, and its sales plummeted at the beginning of the pandemic. In the company's fiscal 2020 first quarter, which ended May 3, revenues were down 17% year over year. But that was actually a lot better than athletic apparel rival  Nike (NKE -1.00%) -- for its fiscal fourth quarter, which ended May 31, its sales dropped 38%.

Lululemon has a strong digital sales program, like Target, and sales turned back to growth in its fiscal second quarter (which ended Aug. 2), with a 2% increase.

The company has now put together two straight quarters of double-digit percentage growth, with a 22% increase in its fiscal Q3 and a 24% increase in fiscal Q4. In that most-recently reported period, sales through its direct-to-consumer channels increased by 94% and represented 52% of total orders.

"As we look ahead to 2021 and beyond," CEO Brian Cornell said, "we see continued opportunity to invest in our business and our team, building on the strong foundation we've established."

There are several ways Target is innovating and growing. Each quarter, it has expanded the amount of orders that are delivered from its stores -- more than 95% of its sales volume in fiscal Q4 was fulfilled via its stores. That makes for faster and cheaper delivery. It's also adding to the product lines that are available for same-day delivery with Shipt. It has had a lot of success with its exclusive owned brands, and it is expanding them. Ten owned brands each produced more than $1 billion in 2020 annual sales, and four made over $2 billion. These enhance the chain's profitability as well. It's also developing more small-format stores, which feature a curated collection of merchandise and act as shipping hubs in locations where large stores aren't feasible.

Management believes that all of these strategies together create a unique value for Target customers and shareholders, and the results bear that out. Will the retailer be able to continue growing at a strong pace after the outlier year that was 2020? It's certainly possible.

Lululemon is also moving forward with what has proven to be a successful strategy. It also has a robust omnichannel program combining physical stores with an effective digital presence, and it has created a community of fitness-focused individuals with in-store classes and a focus on living the "sweat life." Part of that is developing products and fabrics with the "science of feel" for a technologically enhanced fitness experience.

The company is planning to open 40 to 50 stores in 2021, and it's investing further in its digital capabilities, which now include a virtual waitlist and appointment setting. 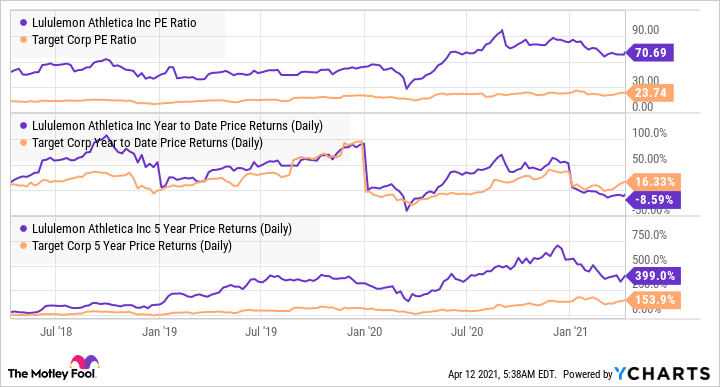 I recommend both Target and Lululemon stock. But with Lululemon's share price down year to date and so much room for growth, as well as its track record and its quick rebound from its early pandemic slowdown, I view it as the better buy today.