Why investors should hold off on rushing to the exits.

A big surprise came on April 13 when online personal styling service Stitch Fix (SFIX -0.81%) announced that founder Katrina Lake will step down as CEO and move to the role of executive chairperson of the board. Current Stitch Fix president Elizabeth Spaulding is taking over from Lake and will lead the day-to-day operations at the company.

This news came as a surprise to Stitch Fix investors since there were no indications that Lake would step down from the position she has held since starting the company in 2011. With the founder gone, some investors might consider selling their shares in Stitch Fix. Here's why that's not a smart move. 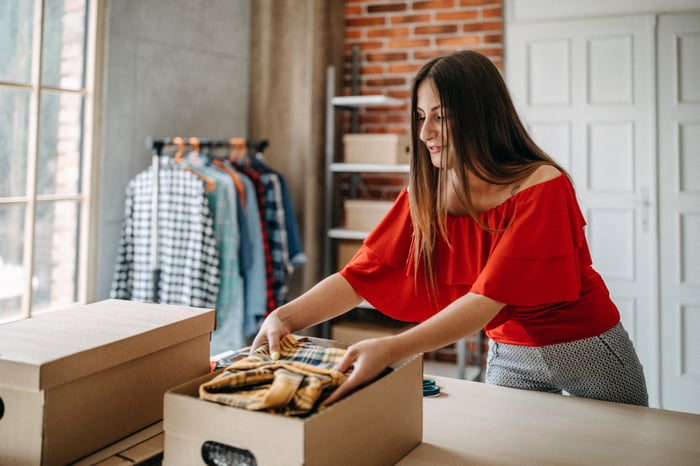 One of the most important aspects of a good business is strong management. This is especially true for founder-led companies. Many of the top-performing stocks of all time have been or continue to be founder-led, including Facebook, Amazon, and Netflix. Good management and a strong founder can help transform a typical business into one that dominates its respective industry and grows at a rapid pace for many years.

With that consideration, Lake's exit from Stitch Fix seems a bit premature. The company was founded less than 10 years ago, and she is still under 40 years old. She has led the company to its current $5 billion market cap and $1.8 billion in trailing 12-month sales in a short time span -- and is the second-youngest woman ever to take a company public. (Whitney Wolfe Herd, founder of the dating app Bumble, became the youngest this year).

This is a fantastic track record, and Stitch Fix will clearly miss Lake's vision and talent. As executive chairperson, she will still play a role in the company (and she still owns 11 million shares of the stock), but these kinds of leadership transitions typically mean her time tending to day-to-day duties at Stitch Fix are over.

The company is still in good hands

Elizabeth Spaulding joined Stitch Fix a little over a year ago, assuming the title of president. It's a little strange to have a separate president and CEO serving at the same company, so Lake may have brought on Spaulding in early 2020 knowing she would be leaving sometime in the near future. Either way, it looks like the company is in good hands. Spaulding had a long tenure at Bain & Company helping businesses go through digital transformations.

One thing investors should watch closely is future management turnover at Stitch Fix. Longtime COO Mike Smith left the company late last year. With two of Stitch Fix's early leaders gone, there is a risk the company's culture that launched the business and grew it to a $5 billion company goes with it.

Why it isn't time to sell

While Stitch Fix investors have a right to worry about Lake reducing her role at the company, there is no reason to panic and sell shares. First, there is no evidence that Lake is getting pushed out like what happened at Uber a few years ago with founder Travis Kalanick. And second, Spaulding was already in charge of Stitch Fix's most important initiatives -- the international expansion and Direct Buy -- before getting promoted to CEO.

At current levels, Stitch Fix trades at a price-to-sales ratio (P/S) of around 2.5 if it can hit its guidance for the fiscal year ending this July. While not yet profitable, the company has a reasonably long track record of 15% to 25% sales growth, and its 44% gross margin indicates it could enjoy solid profitability if management chose not to invest so much in growth. Plus, with Direct Buy only launching to all members last year and hitting 13% engagement and a tripling of revenue quarter over quarter in the first half of 2020, it is not overly optimistic to think Stitch Fix can extend its trajectory of double-digit revenue growth for the foreseeable future.

With all of these factors at play, there's no reason to sell Stitch Fix just because Lake is stepping down as CEO.