Video streaming veteran Netflix (NFLX 2.72%) reported first-quarter results just after the closing bell on Tuesday, April 20. The report fell short of a couple of important targets and the guidance for the next quarter was modest. Netflix shares fell as much as 11.8% in after-hours trading, dropping back to levels not seen since March 25.

Netflix added 4 million net new subscribers during the first quarter, adding up to 207.6 million global paid memberships. Management's guidance had suggested 6 million net additions. Revenue rose 24% year over year to $7.16 billion and earnings jumped from $1.57 to $3.75 per diluted share. The top-line result was roughly in line with guidance and earnings exceeded the stated target of $2.97 per share. 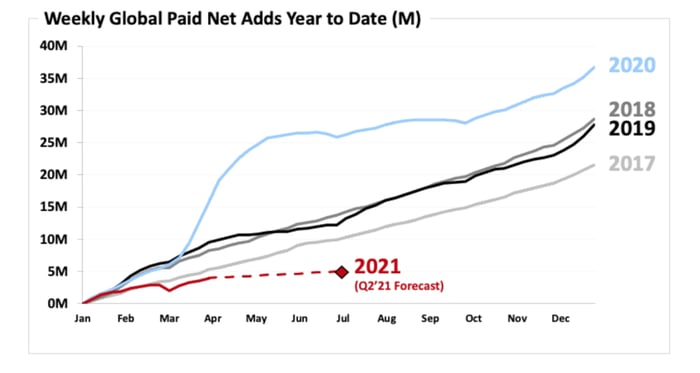 Looking ahead to the second quarter, Netflix's management expects earnings to double while revenue increases by approximately 19%, landing near $7.3 billion. Subscriber additions are seen slowing down to 1 million names.

"In terms of Q1 performance, it really boils down to COVID, frankly," said CFO Spence Neumann on the earnings call. "The extraordinary events of COVID continue to have a big impact on the world and for us, at a minimum, it creates some short-term choppiness in some of the business trends that we see."

In particular, the health crisis generated more than 40 million new subscribers in 2020 while also slowing down the pace of content production dramatically. The soft customer additions in the first quarter followed as a reaction to that combination of factors. Many title launches and new season premieres that had been scheduled for the first half of 2021 have been pushed back to the second half of the year, which will skew the seasonal business rhythm once again. Neumann pointed out that the annual subscriber growth rate works out to about 20% over the last two years, smoothing out the extraordinary growth of early 2020 and the slower pace that followed. That's in line with the company's average customer growth in recent years.