Please ensure Javascript is enabled for purposes of website accessibility
Log In Help Join The Motley Fool
Free Article Join Over 1 Million Premium Members And Get More In-Depth Stock Guidance and Research
By Will Healy - Apr 20, 2021 at 7:00AM

Is it worth such a high valuation?

Shopify (SHOP 0.54%) has consistently rung the register at over $1,000 per share since last summer. While it is not the only e-commerce stock to grow in value recently, one might wonder whether Shopify's current value justifies that expense.

Let's take a closer look at the Shopify value proposition to determine how expensive it has become. 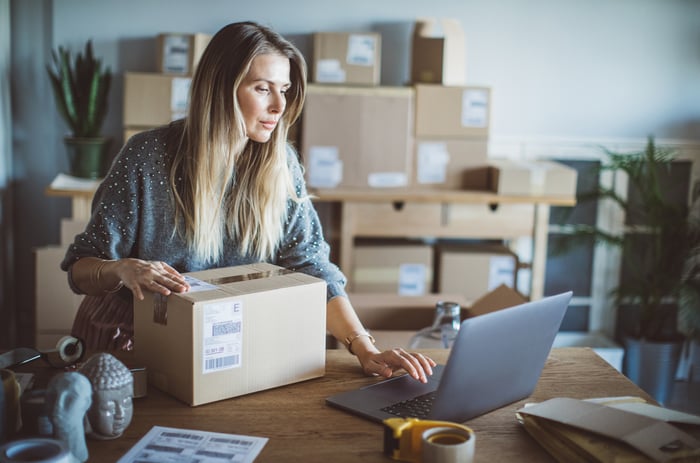 How expensive is Shopify stock?

Shopify trades in the $1,200 per share range as of the time of this writing. This represents an increase of nearly 4,600% since it debuted in 2015. Shopify's role in making the e-commerce surge possible helps explain this increase.

However, investors should remember that this is approximately 20% lower than its peak in early February when Shopify topped out at just under $1,500 per share. Investors have sold off as the tailwind that came from shoppers wanting to buy online during the pandemic begins to recede.

More importantly, nominal prices do not necessarily mean pricey valuations. After all, investors willingly pay more than $400,000 per share for the A shares of Berkshire Hathaway.

A more meaningful measurement of Shopify's true cost is the P/E ratio. Shopify's current P/E ratio stands at about 470, down from a peak above 800 in December. However, it still appears pricey when considering Amazon's earnings multiple of around 80 or Etsy's 84.

The fact that Shopify's industry has numerous competitors also makes the multiple seem outlandish. WordPress platform WooCommerce holds the highest market share in this industry, according to Oberlo. Its 28% of the market comes in well ahead of Shopify's 18% share and Wix.com's 17% of the market.

Still, Wix's stock has seen only about one-fourth as much growth as Shopify's since Shopify launched its IPO. So why does Wix stock not generate as much interest? For one, Shopify stands out by offering more functionality for customer logins, checkouts, and linking to shippers compared to Wix.

However, the most important advantage may lie in the Shopify Fulfillment Network (SFN). Because of the SFN, not only can Shopify host an e-commerce platform, but it can pack, ship, brand, and manage orders and inventory for clients. This places Shopify in an advantageous position over its peers that merely sell software as a service.

For the year, the company earned almost $320 million in net income, compared to a loss of $125 million in 2019. Shopify limited the increase in operating expenses to 45%, allowing for a $90 million profit in operating income. Other income, which consists mainly of equity investments and whatever income tax expenses it can recover, also boosted net income.

Shopify also generated a free cash flow of about $383 million. However, cash and marketable securities grew to $6.4 billion, an increase of $3.9 billion. Most of this liquidity came from the issuance of convertible senior notes, which brought in more than $900 million, and the issuance of new shares, which raised almost $2.6 billion. That liquidity leaves Shopify free to invest in SFN and other ventures without compromising its financial position.

Shopify stock also rose by just under 145% over the last 12 months. However, Shopify fell following the earnings announcement. Though management predicted "rapid growth in gross profit dollars," the company anticipates smaller increases as more shoppers return to stores as the pandemic recedes. For this reason, it did not publish any specific revenue or income figures. 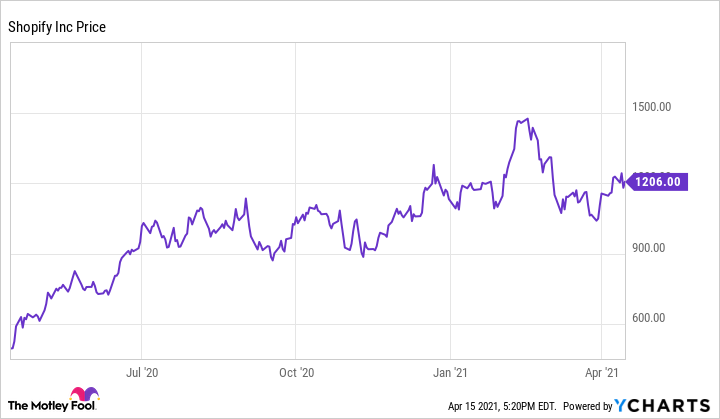 Should I pay a premium for Shopify?

Investors should not expect Shopify stock to become cheap. Its competitive advantages, particularly with the benefit of SFN, will likely foster massive revenue, profit, and stock price increases in the coming years.

Still, as mentioned before, this has brought the P/E ratio down to about 470. It comes in well above its peers and seems like a high multiple to pay given the company's unwillingness to publish more definitive guidance. Until Shopify gains greater clarity about its future growth, investors should think twice about buying this tech stock at current levels.