Please ensure Javascript is enabled for purposes of website accessibility
Log In Help Join The Motley Fool
Free Article Join Over 1 Million Premium Members And Get More In-Depth Stock Guidance and Research
By Anirudh Shankar - Apr 23, 2021 at 8:15AM

GlaxoSmithKline presents a great opportunity for investors this year.

U.K.-based pharmaceutical GlaxoSmithKline (GSK 0.51%) has operations that cover the globe, a deep catalog of successful consumer and healthcare products, and an interesting pipeline of potential new treatments. But its share price is still down by about 21% from the five-year peak it hit in January 2020. Shares are also trading at a discount compared to historical valuations. In short, GlaxoSmithKline is on sale. Here's why you should consider taking advantage of that and adding the stock to your portfolio. 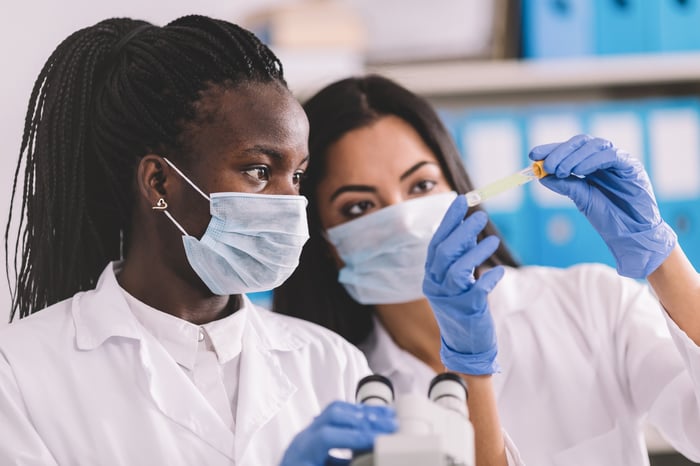 GlaxoSmithKline was born from the merger of pharmaceutical companies Glaxo Wellcome and SmithKline Beecham, which brought along such well-known consumer products brands as Tums (heartburn), Sensodyne (toothpaste), and Nicorette (smoking cessation).

The company also has a big international vaccine business -- 70% of their manufactured vaccines go to emerging markets in places like Africa and India. It has been allocating a lot of R&D funding to the fight against malaria in these markets. Over the past few years, it has also been developing vaccines for RSV (respiratory syncytial virus) and shingles, and was in the race to develop a COVID-19 vaccine, before falling behind due to not being prepared with its mRNA platform. It now plans to focus on the next generation of COVID-19 vaccines, which will target some of the variants of concern that have emerged during the pandemic.

In 2020 alone, the vaccines unit made the company in excess of 7 billion British pounds, and the business is expected to grow significantly over the next 10 to 15 years as global demand for vaccines increases.

On Dec. 19, 2018, GlaxoSmithKline and Pfizer announced that they would be merging their consumer health businesses into a joint venture. The formation of that joint venture closed in July 2019, bringing together an assortment of over-the-counter brands including GlaxoSmithKline's Sensodyne, Voltaren, and Panadol and Pfizer's Advil, Centrum, and Caltrate.

GlaxoSmithKline notes that many of these brands are the market leaders in countries such as Germany and India, attracting a broad range of customers. Combined sales from the joint venture totaled 12.7 billion British pounds in 2020.

Last year, the companies announced plans to spin off that joint venture into a new public entity in which GlaxoSmithKline will have a 68% equity stake. Pfizer will own the remaining 32%. Based on the current plan, this business won't be publicly traded until July 2022.

GlaxoSmithKline is now trading at a price-to-earnings ratio (P/E) of about 13. Compared to its big pharmaceutical peers, that's quite low: Johnson & Johnson's P/E comes in at around 29, Novartis' is 25, and Eli Lilly's is about 28. We can also see that shares are trading down by about 21% from the high of $47.89 they reached back in January 2020. Should shares return to the levels they were trading at before last year's pandemic-induced sell-off, investors could book market-beating gains.

As a multinational pharmaceutical company, GlaxoSmithKline is exposed to the global economy, and it owns some hugely successful products in both its vaccine and consumer health businesses. Shares fell for a number of reasons last year, including its setbacks in developing a COVID-19 vaccine candidate and the revenue hits it took due to its joint venture and spinoff plans.

Today, shares are trading at a discount to their historical market valuations based on a number of metrics. Because of this, the dividend yield is an unusually good 5.58% -- a fine reward for investors to reap while they wait for the stock price to recover.

GlaxoSmithKline continues to make strides in its expansion into emerging markets, and will be a solid company to own for the long term. That makes this a good time to pick up shares while they're still discounted.