Please ensure Javascript is enabled for purposes of website accessibility
Log In Help Join The Motley Fool
Free Article Join Over 1 Million Premium Members And Get More In-Depth Stock Guidance and Research
By Keith Speights - Updated Apr 23, 2021 at 9:32AM

Spoiler alert: It's not because I'm fearful.

When should investors be fearful, according to Warren Buffett? When others are greedy. And a lot of people are greedy right now. The stock market is at all-time highs. Many investors have jumped aboard skyrocketing stocks that, quite frankly, don't deserve their impressive gains based on their underlying business prospects.

One way to be fearful and still make money is to buy the market's so-called "fear index." The CBOE Volatility Index (^VIX -2.94%), commonly referred to as the VIX, technically tracks the volatility of S&P 500 index options. But the VIX can rightfully be called a fear index because volatility rises as investors' fears grow.

I recently bought the iPath Series B S&P 500 VIX Short-Term Futures ETN (VXX -1.73%) -- which attempts to track the VIX. However, I didn't do so to heed Buffett's well-known advice. Here's why I decided to buy the market's fear index via this exchange-traded note. 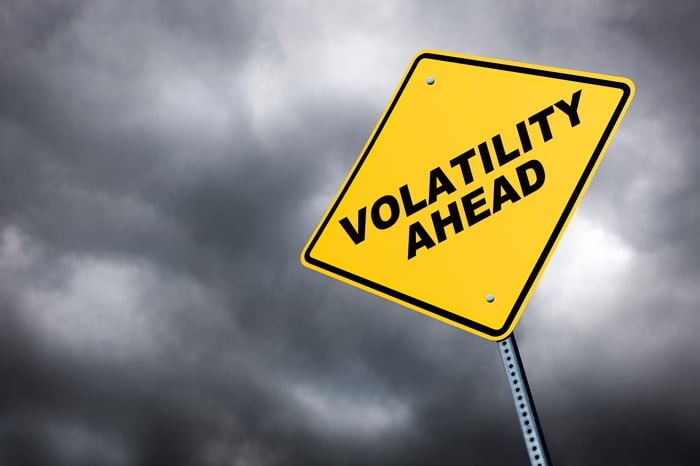 The calm before the storm?

Things seem to be going pretty well across the world right now. Millions of people have received COVID-19 vaccines. Economies are reopening. While the pandemic is still ongoing, there's reason to be hopeful that an end is in sight.

But could this merely be the calm before the storm? I think it's possible.

Many investors weren't in the market in 2000 when the dot.com bubble burst. They didn't own stocks during the financial crisis of 2008 and 2009. Perhaps some don't remember the worries about Greece's debt that triggered a steep market sell-off in 2011.

The reality is that there's nearly always a potential crisis just around the corner that could cause stocks to plunge. For example, Russia is currently amassing troops at its border with Ukraine. Tensions are rising over concerns that China could invade Taiwan, especially after the Chinese government stated that Taiwan's military "won't stand a chance" if an invasion occurred.

And yes, stock valuations are high. The S&P 500 Shiller Cyclically Adjusted Price-to-Earnings (CAPE) ratio is the highest it's been since 2000 -- right before the bottom fell out of the stock market.

So why did I buy the market's fear index? In part because there are lots of reasons why volatility could spike at any time. However, I mainly did so because volatility is relatively low right now. In fact, the iPath Series B S&P 500 VIX Short-Term Futures ETN, which I'll refer to as VXX for short, is at its lowest level ever. (That's true, at least, in its current form. There was a previous version of the VXX that was shut down.) 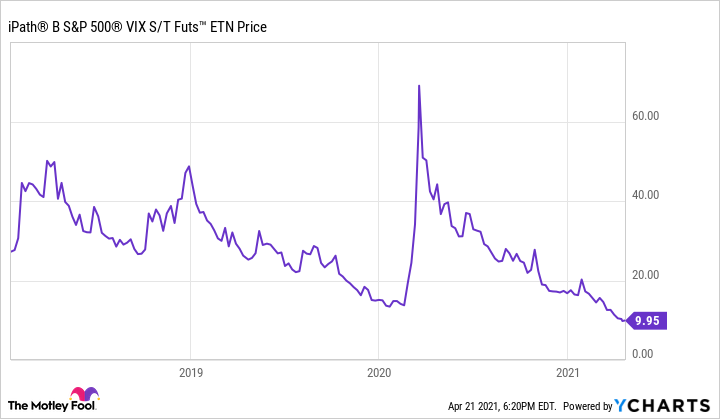 You probably noticed from the above chart, though, that this version of the VXX has only been around a few years. The VIX fear index itself isn't at an all-time low. However, it's lower than it's been since before the COVID-19 pandemic.

I could have bought call options on the VIX. The main downside to this approach is that these options lose value over time if the underlying index doesn't move significantly higher. I suspect that volatility will jump, but I'm not certain when it will happen. That's why I chose to buy shares of the VXX instead. It doesn't experience time-based decay as a call option does.

While I'm not sure when volatility will spike, though, I'm 100% certain that it will happen sooner or later. Over the last decade, the VIX has risen above its current level at least once every year, except in 2017. It's frequently soared way above the current level.

By the way, I'm not pessimistic whatsoever about the stock market over the long run. I'm a dyed-in-the-wool optimist. My view is that stocks are the best vehicle for generating outsized returns over the next decade and beyond.

Actually, I've even bought some stocks in recent months. For example, last week I picked up shares of Pinterest (PINS -2.47%). I think it's the best social media stock on the market right now. I also bought shares of Sea Limited (SE -2.14%), a combination gaming/e-commerce/digital-payments company with tremendous potential.

The important thing to note, though, is that I fully expect both Pinterest and Sea Limited to exhibit significant volatility over the short run. I invested in the stocks because I also fully expect that they'll deliver great returns over the long run.

Buffett said to be fearful when others are greedy, but I'm really not fearful at all. However, I am pragmatic. And from a pragmatic standpoint, buying the fear index makes a lot of sense to me right now.

Editor's note: A clarification has been added to this article that a previous version of the VXX existed but was shut down.

Down 60% or More on an Investment? Past Stock Market Bubbles Teach Us This