Please ensure Javascript is enabled for purposes of website accessibility
Log In Help Join The Motley Fool
Free Article Join Over 1 Million Premium Members And Get More In-Depth Stock Guidance and Research
By Rick Munarriz - Apr 27, 2021 at 10:05AM

The online retailer would make life easier on a lot of people with a smaller stock price.

It's odd to see a retailer that prides itself on low prices fetching a four-figure stock price, but here we are. Amazon.com's (AMZN 3.15%) success and its reluctance to split its shares is creating an interesting dilemma for the iconic growth stock.

There are only three U.S.-listed stocks with larger price points than Amazon, and none of them are posting the kind of double-digit top-line growth that the world's largest online retailer routinely delivers. With Jeff Bezos moving on in a few months wouldn't a stock split be the perfect farewell gift? You have to go back 22 years to find the last time Amazon split its shares. It's time for Amazon to party like it's 1999. 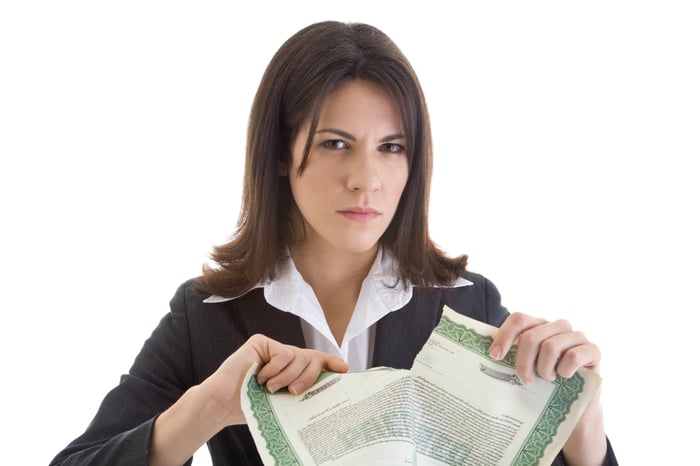 Amazon is a rock star. It's always been gaining market share at the expense of brick-and-mortar chains, but last year the pandemic found it playing at an entirely different level. Net sales rose 38% in 2020, its biggest burst in nine years. When Amazon reports fresh financials later this week it should be another blowout.

Wall Street pros see Amazon's top line surging 38% in the first quarter that it will unroll on Thursday afternoon. There's bubbling speculation that another better-than-expected report can trigger its first stock split of the millennium.

In theory, it shouldn't matter. A stock split is a zero-sum game. Amazon with 500 million shares at $3,400 -- where it's roughly now -- or Amazon at 5 billion shares at $340 is still a $1.7 trillion company. With investors able to buy fractional shares, it's not as if even someone with just a little money to put to work in the stock market can't become an Amazon shareholder.

However, it's also undeniable that there's a certain bullish sentiment that accompanies split announcements. We saw a pair of market's priciest stocks move even higher after splits last summer.

Another reason to consider a lower stock price with a commensurate increase in its share count is that it's the only way that Amazon ever gets added to the Dow. There's no denying that Amazon is worthy of induction into the inner circle of the Dow 30. However, as an archaic price-weighted index, the high $3,400 price tag makes joining impossible. The Dow is determined by multiplying every stock price by a common divisor, and the sum of the prices of the 30 stocks in the Dow Jones Industrial Average was $5,164 as of Monday's close. Amazon would be 40% of the Dow -- and that's not happening.

Amazon obviously doesn't need the Dow badge. It's doing just fine on its own. However, with stock splits fashionable again since last summer, it's time for some of heavy-priced tech stocks to kick off a new summer of splits. The temperatures are starting to heat up, and Thursday is just around the corner. It's your turn, Amazon.