Please ensure Javascript is enabled for purposes of website accessibility
Log In Help Join The Motley Fool
Free Article Join Over 1 Million Premium Members And Get More In-Depth Stock Guidance and Research
By Jennifer Saibil - Apr 28, 2021 at 9:28AM

The e-commerce giant has a habit of beating revenue forecasts.

Amazon (AMZN 0.73%) stock has been a great investment over the past 10 years, notching a price gain of 1,652%. The e-commerce giant had an amazing 2020, filling orders for millions of new Prime members (as well as the millions of existing ones), making inroads into its many new business segments as it managed during the coronavirus pandemic, and generating more than $386 billion in revenue (up 37.7% from 2019).

As 2021 marks a turning point in the pandemic and more people get vaccinated and again venture out into the community, will this return to normalcy dent Amazon's next earnings report (scheduled for release Thursday)? Or should you bet on more of the same and buy shares now, before the fiscal 2021 Q1 release?

Building on its past successes

Amazon has built itself up from a not-so-simple bookseller to become not only the top e-commerce company in the world, but the second-largest U.S. company as measured by revenue, only topped by rival retailer Walmart. 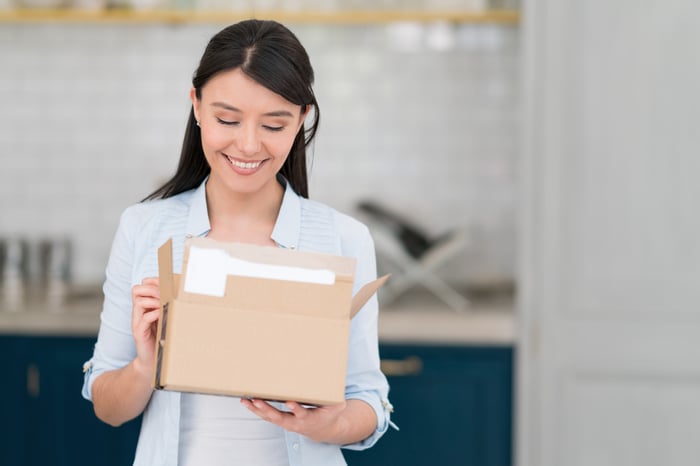 The company's services were so popular during the early stages of the pandemic that for several weeks it had to put a hold on all non-essential product orders so as to keep up with the extreme demand for essentials. It was so confident the high demand would continue that it hired hundreds of thousands of new workers to manage the increased workload.

As for how Amazon will fare now that most lockdowns are over and vaccinations are in full swing, company management projects it will do very well.

In the first quarter of 2020 (just before the pandemic began), Amazon reported a year-over-year sales increase of 26% and a net income decrease of about 30%. The rest of the year ended up being pretty spectacular.

For the first quarter of 2021, Amazon is projecting sales growth of 33% to 40%, suggesting confidence that sales are not slowing down at all.

The company doesn't regularly report Prime subscriber growth, but in his last letter to shareholders released last week, outgoing CEO Jeff Bezos said that it now exceeds 200 million. That's a 33% jump from the 150 million reported in January 2020. As for his departure, Bezos said "Right now I see Amazon at its most inventive ever, making it an optimal time for this transition."

The king of disruptors

Amazon is good at many things, and one of those is pushing into new territory. Along with retail, Amazon Web Services (AWS) is dominating cloud computing, the company is a player in streaming video and audio markets, and it has been a pioneer in AI devices for the home.

AWS now accounts for about 11% of total sales, but more than half of net income. It's also continuously adding new cloud service accounts from companies large and small, including JPMorgan Chase and MercadoLibre.

Amazon is also making important strides in its foray into the grocery market, opening 12 Amazon Fresh stores in 2020 in addition to its Go cashierless stores.  With new launches becoming par for the course, it's hard to imagine Amazon not continuing to post double-digit percentage sales increases for a long time.

Even with the success of vaccine rollouts in the U.S., there are reasons to be confident that e-commerce can continue to be a growth driver for the company. Shoppers still rely on e-commerce and, despite a return to retail normalcy, many customers have come to rely on digital shopping and are making the change permanent.

A McKinsey report found that more people are spending online, and more people plan to continue that trend after the pandemic ends. Its top categories moving online were over-the-counter medicines and grocery, two areas where Amazon has made a big push recently.

Amazon's stock price jumped 74% just in 2020 and is up a relatively tame 4.9% so far in 2021. If earnings beat expectations, as they did for the past three quarters, that's likely to break the jam and cause some upward price movement. Long term, the company still has a lot of potential, making now a great time to buy.