Please ensure Javascript is enabled for purposes of website accessibility
Log In Help Join The Motley Fool
Free Article Join Over 1 Million Premium Members And Get More In-Depth Stock Guidance and Research
By Demitri Kalogeropoulos - Apr 30, 2021 at 8:07AM

The company is still winning market share in the industry's most attractive niches.

It's already been a great year for Boston Beer (SAM 3.84%), but things are getting even better. The beer brewer recently raised its aggressive outlook for fiscal 2021 thanks to booming demand for its Truly hard seltzer. While rival seltzer products are flooding the market, Truly is having no problem defending -- and even expanding -- its dominant position.

In a conference call with Wall Street analysts, CEO Dave Burwick and his team explained why that success, plus a packed pipeline for new releases for brands like Samuel Adams and Twisted Tea, has executives feeling optimistic about the near future. 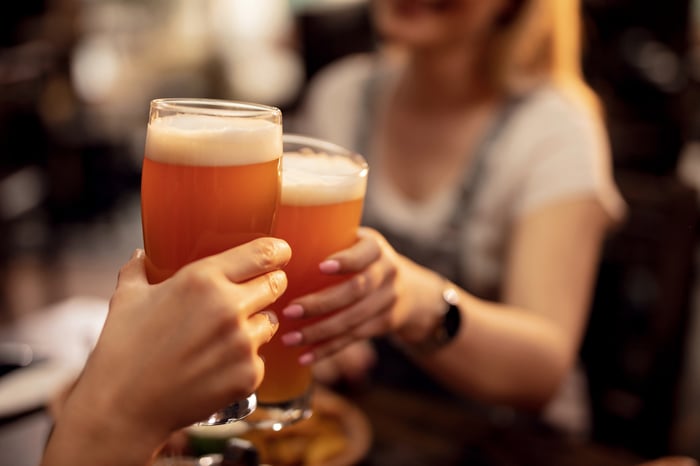 Prepping for a big summer

"Shipments growth was significantly higher than depletions growth as we took active steps to ensure that our distributor inventory levels are adequate to support drinker demand during the peak summer months," Burwick said.

Growth was stronger than expected over the last few months with depletions, a measure of sales to consumers, up 48% year over year. That result stacked up well against the prior quarter's 26% growth and kept Boston Beer firmly in a leading position for the alcoholic beverage industry.

Management is expecting the good times to last well into the summer months. That's why the company shipped many more cases, especially of Truly beverages, than were sold during the quarter. The extra volume should keep retailers amply stocked for the busy summer season.

"Our depletions growth in the first quarter was the result of increases in our Truly Hard Seltzer and Twisted Tea brands, partly offset by decreases in our Samuel Adams, Angry Orchard, and Dogfish Head brands," Burwick stated.

Several major portions of Boston Beer's portfolio struggled during the fiscal first quarter, including its core Sam Adams products and the wider restaurant and bar division. But the runaway success in the Truly franchise easily offset all of those problems. In fact, Truly gained nearly seven percentage points of market share during the quarter to reach 28% of the hard seltzer niche, according to the company.

Overall, there's no sign yet that the flood of new competitive launches has put a dent in Truly's momentum. But Boston Beer is still planning to boost marketing and launch several new flavorings to extend its lead this year.

"We are confident in our ability to innovate and build strong brands that complement our current portfolio and help support our mission of long-term profitable growth," founder and chairman Jim Koch said.

Boston Beer raised several of its key guidance metrics after the banner start to the year. Management now sees adjusted earnings falling between $22 and $26 per share for the full fiscal year, up from its prior outlook of $20 to $24 per share. Depletions growth also increased to a range of 40% to 50%. And average selling price increases will be between 1% and 3%.

These changes reflect the confidence Boston Beer has in its ability to continue winning a growing share of the booming hard seltzer and hard tea categories even as its restaurant and bar sales start to recover with the the rapid COVID-19 vaccine rollout.

The upgrades also extend the company's industry lead when it comes to growth. That's why, while the stock has soared in the last year, investors still have good reasons to be optimistic about holding Boston Beer today.